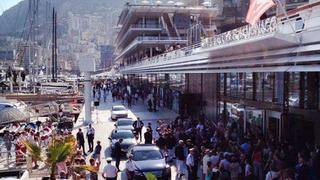 The new premises of the Yacht Club de Monaco was officially opened with a grand celebration on 20 June, 2014, and Boat International was live on the scene.

His Serene Highness the Sovereign Prince of Monaco Albert II, 30-year president of the Yacht Club de Monaco, opened the new location along with the building's architect Lord Norman Foster and Monaco government ministers. 'The flag I raised today flies proudly on the mast at the top of our new premises,' says HSH Prince Albert II. 'It marks an important phase in the life of our Club, for Port Hercule and for the Principality. With this architectural masterpiece, we are affirming our Monaco yachting identity, our ambition being to continue to orient our country’s future prosperity to the sea.'

The opening coincided with Giraglia Rolex Cup finishing at Monaco – the first time the offshore yacht race has done so in its 62 years of existence. The racing yachts were berthed outside the new club, adding to the air of excitement of the grand opening party.

The sure-to-be-iconic Norman Foster-designed building for the new Yacht Club de Monaco resembles that of an ocean liner, and Foster said if it were a real liner, he would give her the symbolic name of Free Spirit. 'When designing this building which is open to the sea, at the centre of the harbour and embracing the city, we wanted to preserve the traditional spirit so dear to the Principality,' Foster says.