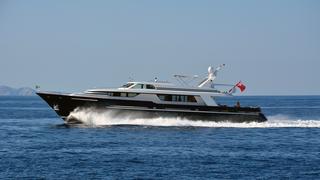 The 31 metre motor yacht Ninemia, listed for sale by Van der Vliet Quality Yachts, has been sold with Ben Harvey at Nautical Escapes introducing the buyer.

Built in aluminium by Dutch yard Vitters to a design by Willem de Vries Lentsch, she was delivered in 1995 and has been carefully maintained since, including a complete engine rebuild in 2013. An exquisite interior finished in mahogany by French designer Isabelle Blanchere accommodates up to 10 guests in four cabins consisting of a master suite, VIP suite, double and a twin plus two Pullman berths, all with en suite bathroom facilities. In addition, there are quarters for up to six crew in three cabins.

The saloon is spacious and well furnished with a U-shaped settee to port facing an entertainment centre including a large flat screen television to starboard while forward is a dining area with seating for eight guests.

In 1999 the aft deck was extended to create the real heart of Ninemia. It now has sun loungers, built in settees, an extendable teak table and chairs plus a large awning that can shade the entire area if desired. Towards the side decks are windbreaker doors that give shelter to the aft deck during light breezes. Up on the flybridge is a second helm position, built in seating, a folding central table and a fixed awning.

She has always been known for her clean lines and neat turn of speed, as twin 2,800hp MTU diesel engines power her up to 30 knots.