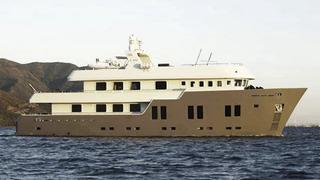 Price drops on superyachts B-Nice and Trilogy at Fraser

Never one to do things by halves, Jeff Partin sends me news of price reductions on two of his central motor yacht listings, the 34.9m B-Nice and 27.43m Trilogy.

B-Nice is an explorer yacht completed by Turkey’s Saba yard in September 2010 and delivered in January 2011. RINA classed, she accommodates eight guests in a full beam master suite on the upper deck and three queen-sized VIP master staterooms below.

The interior features solid wood American classic and period furniture and B-Nice also boasts a private elevator to the owner’s deck. Twin 740hp MTU engines power her to a cruising speed of 10 knots and a range of 4,000 nautical miles.

Trilogy is a rugged long range cruising motor yacht built in 1985 by Cheoy Lee to a design by Jack Hargrave. She's been continually upgraded including a mechanical refit in 2003 at Bradford Marine and an interior refit in 2004 under the direction of Patrick Knowles.

Accommodation is for six to eight guests in a master, double and twin cabins plus two Pullman berths. Fitted with Naiad stabilisers, twin 650hp GM engines give Trilogy a cruising speed of 10 knots and a range of 2,500 nautical miles.