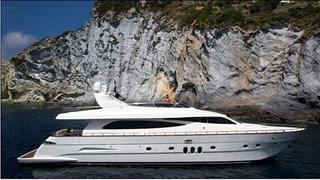 Although she was delivered by Canados in 2008, David says she’s been used for a total of only 12 days since new and consequently there are just 130 hours on her twin 3600hp Caterpillar engines. Another factor keeping Sans Souci in ‘as new’ condition is that she’s been stored in her own shed on dry land.

Accommodating eight guests in four staterooms and lying in Italy, Sans Souci is down from €3.3 million to €3.1 million.