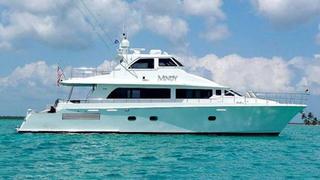 A note from Whit Kirtland at Bradford Marine Yacht Sales alerts me to a price drop on his central listing, the 24.38m motor yacht Mindy.

Built in 2005 by Cheoy Lee, Mindy has exterior styling and naval architecture by Tom Fexas.

A Jon Pokela interior sleeps eight guests in a master suite, VIP stateroom and a double and twin cabin while twin 1550hp Caterpillar engines give her a cruising speed of 20 knots and a range of 1,000 nautical miles at 12 knots.

Available to view at Bradford Marine's under cover showroom in Fort Lauderdale, Mindy is now down from $2.45 million to $2.295 million.