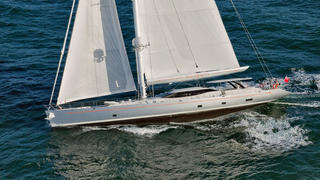 The 40.8 metre sailing yacht Valquest has been listed for sale by Burgess.

Designed by Dubois, she was built in aluminium and was launched in late 2009 by Bloemsma Van Breemen, and is Lloyds classed and MCA compliant. The interior features modern design with a high quality mahogany and white leather finish throughout accommodating nine guests in four cabins consisting of a master suite, two doubles and a twin, all with entertainment centres and en suite shower facilities. In addition, there is accommodation for six crew in three cabins aboard this yacht for sale.

A very large split level saloon provides a focal point for the living space and offers a dining area seating eight guests and a bar. Forward, and completely separate from the guest areas, are the crew quarters. She is equipped with dual head stays, a rollaway boom with captive winches enabling all sail handling systems and hydraulically operated running backstays. Under power, a 715hp Caterpillar diesel engine gives her a range of 3,000 nautical miles at her cruising speed of 10 knots.