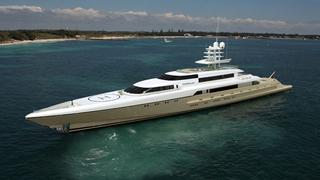 The third and most advanced vessel in the ground-breaking Silver Series designed by Espen Oeino, Smeralda is now nearing completion at Hanseatic Marine in Australia, with delivery scheduled for the spring of 2012. She will deliver impressive speed and performance as a long range cruising yacht.

Equipped with powerful twin MTU main engines, her top speed is anticipated to reach close to 30 knots, while retaining the extraordinary fuel efficient credentials which are intrinsic to the Silver Series concept. Smeralda is being built to Lloyds class and will be fully MCA compliant.