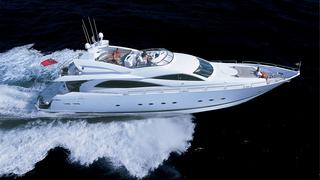 The Sunseeker 94 flybridge motor yacht Miss Sarah, listed for sale by Colin Rowles at Sunseeker Poole, has been sold in an in-house Sunseeker deal.

The 28.65 metre Miss Sarah was launched in 2003 and was described by her broker as representing the “true identity of Sunseeker; a boat that has been engineered to the highest possible standard”.

Sunseeker built 15 of these yachts between 2001 and 2006, when it was replaced by the 90 Yacht. The current equivalent is the 28m Yacht. The former F1 motor racing champion Nigel Mansell bought and owned one of these, called Red Five.

Miss Sarah is GRP constructed and her high-end interior has gloss lacquered American cherry wood throughout.

She can accommodate up to eight passengers in her four luxurious cabins, all of which boast en-suite bathrooms. The master cabin is located aft, with the guest twin and guest Pullman cabins middle on port and starboard sides. The double VIP guest cabin is forward. The owner’s stateroom has a walk-in wardrobe and an escape hatch to the electrical workshop area.There is also room for a crew of three.

The flybridge offers fantastic vision as well as being a great entertaining space. The saloon and galley are located on the main deck. There is an aft cockpit and bathing platform, from which an Avon Jet RIB 400DL can be enjoyed and used as a tender.

Miss Sarah is powered by two MTU 16V 1826hp engines, which propel her to a cruising speed of 23 knots and a top speed of 28 knots.