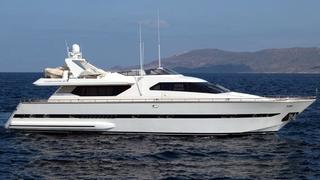 Superyacht Christaldi's back on the market as Arkadia at OCI

Yacht turnover in the brokerage market seems to be on the increase as, on June 30th 2011, I reported the sale of the 25.6m motor yacht Christaldi's and now Yannis Mitsopoulous at Ocean Independence tells me she's back on the market renamed Arkadia.

In the interim, she had a €300,000 refit with new paint, new teak and navigation equipment, along with a full mechanical and electrical service.

Built by Italcraft in 1994 and previously refitted in 2007, Arkadia accommodates up to 10 guests in a master, VIP and two twin cabins plus two Pullman berths.