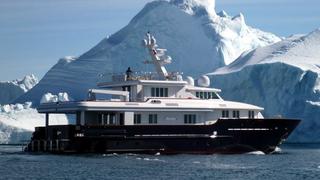 Natalia Hortynski at Ardell sends in news that, having recently joined the company, veteran yacht broker Jeromy Mold has brought his central listing, the 32m motor yacht Indigo into the fleet of yachts for sale.

Built by CBI Navi in 1999 and refitted in 2010, she’s a pocket explorer yacht featuring accommodation for six guests in three staterooms and a crew of up to six in three crew cabins. She is maintained to the highest standards and remains in Lloyds class.

Indigo has recently completed a world circumnavigation and a full circumnavigation of North and South America via Cape Horn and the North West Passage through the icefields of Northern Canada and Alaska.