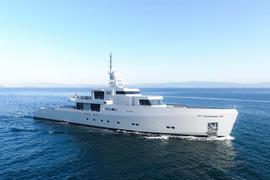 The 43.7 metre motor yacht Cyclone has been sold with David Legrand at Fraser representing the seller and the buyer introduced by Alain Auvare at Onboard Yachting.

Built in epoxied wood by Turkish yard Tansu Yachts with naval architecture by Diana Yacht Design, Cyclone was delivered in 2017. As the image below shows, she boasts the yard's trademark military styling, with sleek silver topsides, an emphasis on straight lines and several rectangular portholes.

Al fresco relaxation areas include a foredeck seating area and a notably large aft deck, which can be used to carry two tenders measuring up to 6.2 metres.

The galley is situated on the lower deck in the crew quarters, with three guest cabins (two doubles and a VIP) also on the lower deck and the master suite on the upper deck, taking the total capacity to eight guests and five crewmembers. One intriguing feature of the interior is her library, which boasts a ceiling height of around three metres.

Power comes from a pair of 1,900hp Caterpillar C32 diesel engines that propel Cyclone to a cruising speed of 16 knots, topping out at 21.7 knots. When trimmed back to ten knots she boasts a maximum cruising range of 2,700 nautical miles.