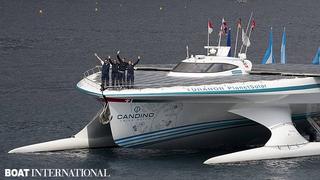 On Friday 4 May at 14h15, Tûranor PlanetSolar crossed the finish line in Monaco, completing a circumnavigation that is the first to have been powered only by the sun.

Tûranor PlanetSolar had left Monaco in September 2010 to embark upon a 60,006km odyssey which ultimately took 585 days to navigate. The solar catamaran followed the sun in an optimised route that also harnessed currents and waves. It was sometimes a question of patience.

A clear ecological message has been sent out by those involved - Raphaël Domjan, leader and founder of the project, the French, German and Swiss crewmembers, and Immo Stroeher, proud owner of Tûranor PlanetSolar.

'It's a first step to change mentalities,' said Raphaël Domjan. 'It was a first. We have opened a door.'

One example has been the action of the government of Ecuador, which, following the passage of Tûranor PlanetSolar in the Galapagos, closed one island to all boats except solar-powered ones.

So where does Tûranor PlanetSolar go from here? The solar catamaran will initially be assisting the PlanetSolar Foundation in an educational capacity, cruising from city to city to teach people, particularly the younger generation, about the possibilities of solar energy. After this, she could become the first solar yacht, or continue to assist research campaigns around the world.

Subscribe to BOAT Pro to access brokerage sales data and unlimited specs for 12,202 yachts in our Superyacht Directory – the world’s most comprehensive superyacht data.