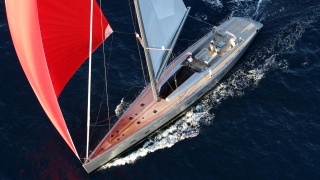 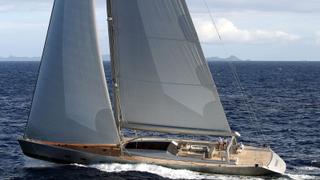 The 37.25 metre sailing yacht Ghost, listed for sale by Burgess, has been sold with the buyer introduced by Matt Albert at Yachting Partners International, and Windward Islands Yachting.

Built in carbon fibre by Dutch yard Vitters to a design by Luca Brenta, Ghost was delivered in 2005 and went on to win a Neptune trophy as Best Performance Sailing Yacht at the 2006 World Superyacht Awards. A stylish, minimalist interior by Lissoni Associati accommodates six guests in three cabins comprising a master suite, double and twin, and all cabins have full en suite facilities.

Importantly for true yachtsmen, she also retains the pleasures of sailing. Steering is completely helmsman-powered by a combination of advanced appendage design and precise calculation of the forces involved. Most other large cruising yachts rely on hydraulically assisted steering, which gives no feedback to the helmsman in terms of the balance of the vessel.

She underwent a major refit at Vitters in 2015-16 where all her sailing, propulsion and domestic systems were serviced, her ECsix carbon rigging was checked and she stepped a new high-modulus Southern Spars carbon fibre mast with in-boom furling. She has a North Sails 3Di racing wardrobe totalling 723sqm of sailpower, four offwind sails including a furling reacher and a carbon/Spectra mainsail.