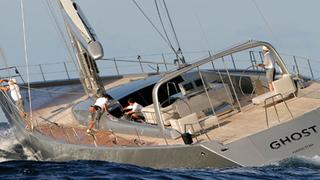 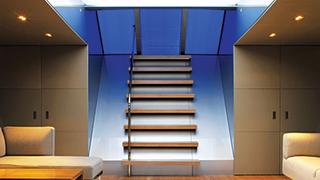 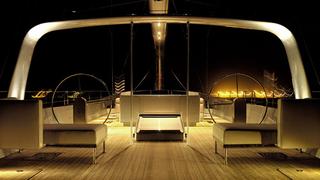 Ghost has been described as one of the most significant yachts of recent years, but I think she should be considered alongside at least two of our other designs, Wally B and the Wally 105 Wallygator II _(now Nariida), because the three boats are the result of an idea born years ago with the initial outline of the 25.3 metre _Wallygator I.

It was that project that instigated the concept of the fast cruiser, in which new thinking was applied to the distribution of space, and advanced technology was used to combine the functionality and performance of racing boats with the comfort of large cruising yachts and the aesthetics of the boats built at the beginning of the last century.

In the early projects we focused on the outside and redesigned the various deck details in an effort to simplify and minimise the components to achieve order and functionality, but with Ghost, the owners, Milly and Arne Glimcher, gave us the opportunity to develop a concept we had been thinking about for some time: a moulded glass coachroof that is interesting from an architectural point of view but also acts as a large, impressive skylight. Indeed, the transparent coachroof allows the exterior of the boat to be perfectly connected to the stunning interior – a modern, minimalist domain of flat square panels, changing textures and clean lines. The glass of the coachroof, which appears dark from the outside, is amazingly clear inside, allowing you to gaze at the rig and sky.

Perhaps it is correct to single out Ghost for attention because she is the culmination of our efforts and therefore the most complete project. She is user friendly and aesthetically pleasing and provides all the comfort necessary on long voyages. Importantly for true yachtsmen, she also retains the pleasures of sailing. Steering is completely helmsman-powered by a combination of advanced appendage design and precise calculation of the forces involved. Most other large cruising yachts rely on hydraulically assisted steering, which gives no feedback to the helmsman in terms of the balance of the vessel.

Ghost crosses the Atlantic twice a year – she touched 28 knots in 38 knots of wind off Finisterre on one voyage – and makes a winter cruise to the Galapagos. She also competes in the Maxi Rolex Cup at Porto Cervo, always winning against boats of the same size. She is fast, safe and comfortable, and a testament to the skills of the captain and crew. But while the attention to detail on board is outstanding, she has special qualities that were difficult to identify with accuracy until the work on her was completed. Now we understand – Ghost is excellent because her owners deeply loved the project and have always chosen to work with people capable of giving her that sense of excellence. They also assembled an accomplished and dedicated crew.

During the build it was pleasant and instructive to work with Bill Green, of Green Marine in Southampton, England, who was already a leading manufacturer of composite when I designed my first boat. Calculating the structures with Giovanni Belgrano, now top structural designer with Team New Zealand, was similarly rewarding, and it was satisfying to see the construction proceed at Vitters Shipyard in Holland with meticulous organisation. The interiors were designed with Piero Lissoni, a friend and another master of his art.