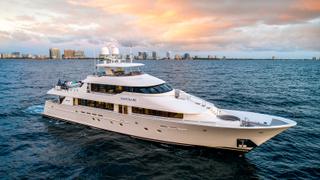 The 39.62 metre motor yacht Kemosabe, listed for sale by Bob Cury at RJC Yacht Sales, has been sold with Bob Cury representing both buyer and seller.

Built in GRP by US yard Westport to a design by Jack Sarin, Kemosabe was delivered in 2008 as a Westport 130’ model. In 2015 her interior was custom designed by Robin Rose featuring raised mahogany joinery throughout and included all new soft goods in neutral tones with sea blue and navy accents. Also in 2015, she was refitted with new Naiad "at rest" stabilisers, upgraded electronics and audio/visual equipment and this past year, two new Northern Light 65KW generators were installed. Her interior accommodates 10 guests in five cabins consisting of a full beam master suite on the main deck, two mirror image VIP suites below amidships to port and starboard, and two twins, all with HD television screens, WiFi internet access and en suite bathroom facilities.

The large saloon is furnished with luxurious settees, occasional chairs, a cocktail table and an entertainment centre including a 55 inch HD television screen and a Kaleidescape server providing on demand audio and video throughout. Forward is a formal dining area with seating for 10 guests around a mahogany table and there is a well equipped galley with U-shaped seating for casual breakfasts and snacks.

The aft deck comes fully equipped for al fresco entertaining and dining, offering a custom teak bar and a built in upholstered settee seating 10 guests. Up in the pilothouse are two Stidd helm chairs, new carpeting and a comfortable leather settee. The sky lounge is the perfect place for relaxation, boasting sofas, a cocktail table, bar, fridge and ice maker plus an entertainment centre including a 55 inch Samsung HD television.

More outdoor space is awaiting on the flybridge, offering a large bar, fridge, ice maker, barbecue, sun pads, ample seating and a custom hard top. Twin 2,735hp MTU engines give her a cruising speed of 20 knots and she was fitted with Naiad at rest stabilisers in 2015.