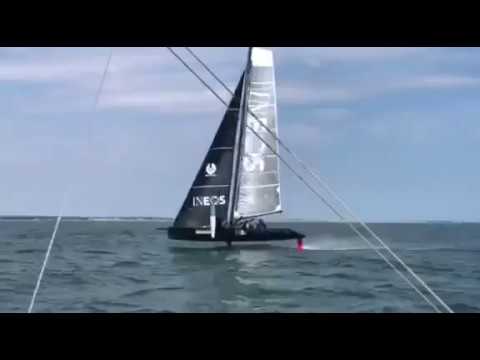 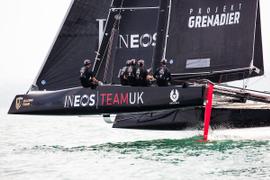 The foiling monohull prototype for the AC75 boats that will be sailed by Britain’s America’s Cup challenger has been filmed under sail for the first time. A video uploaded by Harry Aitchison of the London Corinthian Sailing Club shows Team INEOS UK’s first test boat for the new AC75 rule in action.

The 8.65 metre boat, which is more than three metres under the maximum length for America’s Cup team test boats, was seen performing foiling tacks and gybes. It was reportedly sailing downwind at a speed of 30 knots in 12 knots of wind.

The boat is a prototype for the two 22.8 metre AC75 boats that Team INEOS UK will use to compete in the 2021 America’s Cup in New Zealand.

It comes as Team INEOS GB is set to undertake the third leg of the GC32 racing tour in Palma from July 31- August 4. In the current race standings, INEOS Team UK stands in sixth place out of eight while France’s Norauto sits in first place.

Three changes to the crew line up have also been made with two-time America’s Cup winner Joey Newton joining as jib trimmer and Leigh MacMillan joining as helmsman. Australian Luke Parkinson has also joined as mainsail trimmer

INEOS Team UK was launched in April to challenge for the 36th America’s Cup by Sir Jim Ratcliffe, founder of the chemicals group. It is hoped the £110 million challenge will see Britain bring home the sailing trophy for the first time since it was launched in 1851.