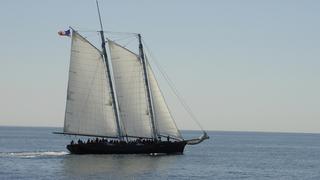 Sailor to circumnavigate the globe on replica America

A sailor is setting out on a world tour that will take in the east coast of America and the Caribbean before ending up in Bermuda for the America’s Cup in 2017. After the sporting event, he’ll complete his circumnavigation by sailing to Europe and beyond.

Troy Sears will be sailing on America, the 42 metre replica of the schooner that gave the America’s Cup its name.

Sears will make more than 100 stops during his trip, visiting New York for the America’s Cup World Series and heading on to the Ernest Hemmingway Marina in Havana at the end of the year. 2017 will see America head to the Caribbean and then Bermuda.

America will take part in a number of regattas along the way, with an estimated 100,000 people sailing on her.

Sears hopes his tour will raise the profile of the America’s Cup. “I have come to learn there is a millennial generation which does not know about the event at all, and a baby-boomer generation that has a huge variety of emotions,” Sears said. “They range from being super excited about the catamarans that are used today, to wanting to see the cup remain exactly the way it’s been since they’ve been alive.”

As part of this tour, Sears has entered into a partnership with North Sails, which makes the jibs for the America’s Cup boats. The sail-making firm will fit America with 6,000 square feet of new sails, made from modern Dacron but with a traditional look to suit the yacht.

“We think it's a great thing,” said Kimo Worthington from North Sails. “He's going to have more than 100,000 people sailing on his boat. I don't think that's hot air. Holy smokes. And he's just a good guy. We want to help him."