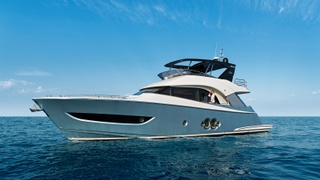 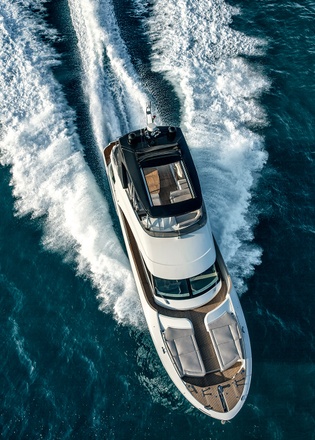 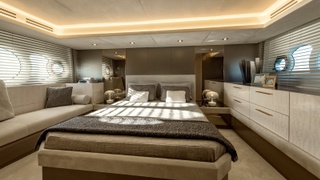 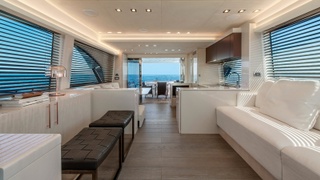 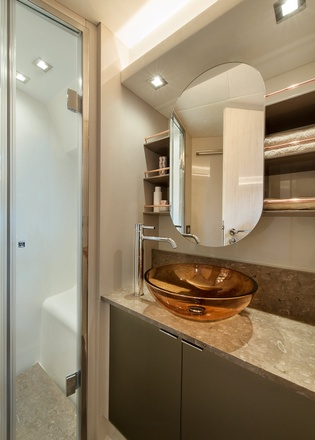 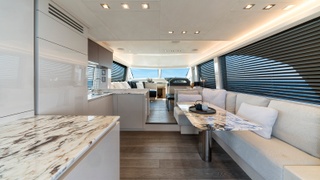 Becoming a classic: Inside the re-invented MCY 66

After making its first appearance beneath the spotlights of the Messe Dusseldorf in January this year, the revamped 20.1m MCY 66 is in the water, dipping its toe for the first time just four weeks ago. Its robin-egg blue hull shines at the dock of Monte Carlo Yachts’ Monfalcone-based yard on a drizzly April spring day.

The Nuvolari Lenard designed-66 is the “second generation” of the existing 65 model. Together with the yard, the firm aims to gradually produce second and generation models of each MCY model with an “evolution, not revolution” design philosophy in mind. This has seen the yard reject the insatiable appetite for “the new” in the hope of creating a stream of classic designs.

“It’s an unstable philosophy to say that the new is better than everything else,” says Dan Lenard, one half of Italian design studio Nuvolari Lenard. “That’s where the mainstream market is but we have to be more cautious, simply because these are the most expensive items people possess in their life which they don’t need.”

MCY’s alternative pursuit for quality and evolving, timeless design has made the brand “unique in the marketplace,” Lenard says. He points to household name iconic brands, such as Rolex and Porsche, which have taken the same path – always seeking to evolve long lasting, classic designs. “The common thing these brands share is high quality and high engineering,” he says.

It is crucial therefore that MCY models must be recognisable. Nuvolari Lenard has set about future-proofing the MCY design by making design details as idiosyncratic as possible. On the 66, this includes the high bow and aft glass doors, which separate the main deck saloon from the cockpit; a feature inspired by superyacht design, Lenard says. The 66’s “huge carbon fibre hardtop” and recognisable “round windows” also form part of the 66’s design signature.

Key interior materials meanwhile include natural stone and wood, combined with lighter colours and surfaces with high level of reflective lacquer surfaces. This “bright atmosphere”, MCY managing director Fabrizio Iarrera says, “gives the idea of a larger yacht.” These materials also have their origins in superyacht design, Lenard says, revealing the firm has used many of the same materials in projects measuring between 70m – 100m.

This strikes a happy chime with owners, he adds. “There is an incredibly high return value of a proud owner showing the boat off and saying that some of the materials are on a 100m yacht – that makes a difference,” he says. Iarrera agrees. “We treat each 66 like it’s a superyacht.”

While the 66’s interiors are customisable to clients’ wishes, both owners of the first two second generation models have decided to stick by-and-large to Nuvolari Lenard’s original design. The three-cabin, three-bathroom layout can also be adapted into a four-cabin configuration, though no owners of the five 66s currently sold have gone for it. Regardless, the master cabin must stay aft of the lower deck accommodation layout, Iarrera says, revealing the deck level is designed around its location.

All of this, Lenard says, has formed an MCY “vocabulary” which has protected the design to such an extent that "you either completely copy Monte Carlo Yachts or you don’t look anything like Monte Carlo Yachts.” “We are constantly improving the technical aspect, while the styling is slowly changing,” he says. “That is the target of MCY, to be there in 30 years just as recognisable as we are today.”

Key to this is MCY’s success in winning the lifelong loyalty of its owners, for the brand to be passed from generation to generation, like a family heirloom. “That is our aim,” Lenard says, “for people to proudly say that, in their family, they always have Monte Carlos. That would be the best phrase to hear before I die.”