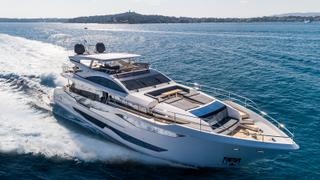 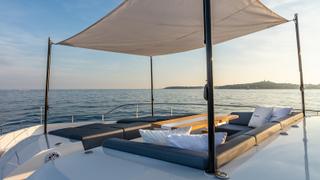 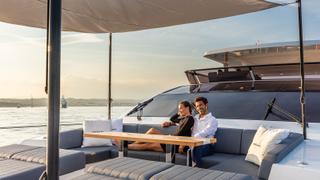 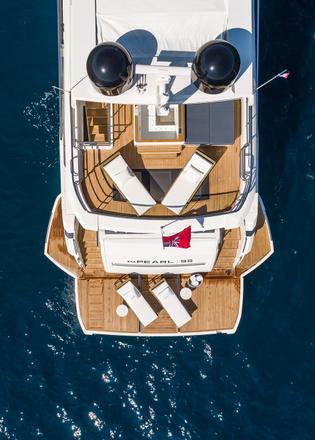 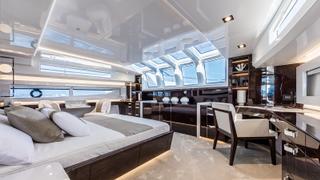 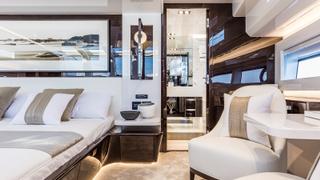 New glazing technology and a penchant for interior curves have led designers Bill Dixon and Kelly Hoppen to come up with a pearl of a boat, says Clare Mahon...

"It’s all about not being inside.” These words might seem strange coming from the mouth of Bill Dixon, the man who created the spaces that define the new Pearl 95, both inside and out, but touring the yacht you see what he means. This boat isn’t so much about the tired “bringing the outside in” line as it is about blurring the boundaries between yacht, water and sky.

Iain Smallridge, Pearl Yachts’ managing director, explains the genesis of the British yard’s new flagship. “The 95 is our first superyacht and our largest to date, created to celebrate our 20-year anniversary,” he says. But while the Pearl 95 is the first and the largest, it also continues the collaboration with a design team that has been defining the look of recent Pearl launches. “We have been working with Bill Dixon for the past 10 years and Kelly Hoppen’s first interiors collaboration with us was in 2013,” says Smallridge. Pearl is not about to change its winning team.

Dixon, who has designed Pearl yachts that range from the 50 to the 95, sees the brand’s identity in defined terms. “I have to keep the DNA that’s in the eye-shaped windows in the bridge and the curve of the hardtop,” he says. “Some things stay similar, but some things evolve. Now we have this wonderful glass technology that lets you put a porthole in a piece of sculpted glass and it’s approved by class. You don’t see the porthole from the outside because it’s flush, so you can really play with the look of hull windows. So add big hull glazing to the list of features that make up Pearl’s DNA.”

Interior designer Hoppen, meanwhile, used key elements from her signature style to put her stamp on the yacht’s look. “I approached the Pearl 95 in a similar way that I did the Pearl 80, but amplified to a much larger scale,” she says. “There are always elements I like to revise and refine. With the Pearl 75, I decided to change up some of the predominant colours, which had been used in the Pearl 65 model. With Pearl 95, I have experimented with a greater range of curved surfaces and textures.

Through the Pearl 95, Dixon attempts to blur the boundaries between yacht, water and sky

“The aim with all my designs is to offer a sense of sanctuary and calm,” says Hoppen. “Using textiles with roots in the East and pairing them with the chic sleek lines of the Western aesthetic helps to create spaces with layers of luxurious personality. Within the yacht, an Eastern flair for texture is incorporated through the luxurious bedding, throws, cushions and ornaments that decorate the interior. “Never underestimate the power of accessories such as layered fabrics, luxurious cushions and good lighting,” Hoppen adds. “Lighting has the power to induce certain types of mood: cosy, warm lamps are vital in transforming an expanse of space into a more comfortable, welcoming environment.”

Movement from the aft deck to the saloon flows easily through wide sliding glass doors. The single level space, with living and dining areas, has such large glazed surfaces that it really does seem to be a continuation of the outdoor deck space, while touches like a drop in the bulwarks by the side doors free up the view to the outside. The airy space is grounded by chocolate brown hardwood floors, accented with a wide band of white marble and chromed steel that continues up the walls. Ceilings in glossy white lacquer reflect and add to the sense of spaciousness.

Just a couple of steps lead down to the full beam master cabin. “I really like the solution we found for the window lines in this cabin,” says Dixon. “It was a key design element for me. The sight lines work well and the light is fantastic.” By combining windows in the hull and in the foredeck, Dixon created a wealth of light; the forward part of the cabin is almost like a greenhouse with windows placed both vertically and horizontally. Hoppen designed a sitting area on the port side and there is ample storage all around. “We’ve been through a ‘sharp’ interior phase, but actually Kelly has brought a lot of curves back,” adds Dixon, pointing out details even in the marble that backs the shelves. “And while there’s lots of contrast between the whites and darker tones she used, the effect is crisp, not harsh.”

“I’ve always been an advocate for sculptural curved and disc shapes in jewellery and interiors,” says Hoppen, “and the incorporation of curved coffee tables, rounded ornaments and arched stair rails adds interest to the space.” With “floating” treads, the staircase leading down to the guest cabins and up to the bridge seems suspended in the air. Finishes and details in the guest cabins are similar to the owner’s, while the bridge is practically all in glass and has integrated navigation and control systems.

The flybridge is an excellent outdoor entertainment space with a fully equipped bar and barbecue, a flat-screen television that disappears into a cabinet behind the helm, seating on both sides and a waterfall spa pool with sunpads. “I kept the bulwark open with just glass siding,” Dixon points out, “and the sunroof is retractable so you get as much direct light as you want.”

The crew gets special treatment too, with separate access on the port side for privacy and efficiency and in crew spaces a continuation of the luminosity and luxury that are found throughout the yacht. “But the hardest part in a semi-raised pilothouse design is getting enough galley space,” Dixon says. This he managed by designing raised sofas in the pilothouse with galley headroom beneath them.

Behind the transom door is a tender garage-cum-beach club, outboard of which are clever platforms that fold down to maximise water-level deck space. “I really like the transom and the fold-down parts,” says Dixon. “They make an additional exterior area that can be opened at the flick of a switch and when the tender is launched you have a bar and everything you could want.”

They’re great features on a yacht of this size and style, but use of space is just one part of the Pearl formula, according to Smallridge. “Our clients like the fact that we are small and can offer more personalised service than larger shipyards.” Pearl’s moulding and engineering are done in Xiamen, China, then hulls are shipped back to Gosport, England, for fitting and finishing. “We are not a mass produced product,” he adds.

“At the same time there aren’t the unknown risks of a custom build. We can offer tailored care with a tested product.” Even if it’s all about not being inside, as Dixon says, it’s certainly nice to be on board. Thanks to careful design, a consistent approach to luxury and the dependable build, the 95 looks to be an excellent way for Pearl to celebrate its anniversary.