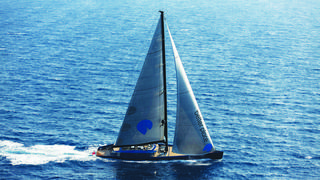 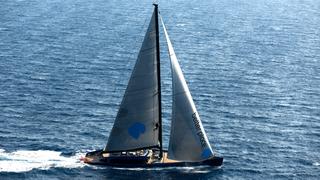 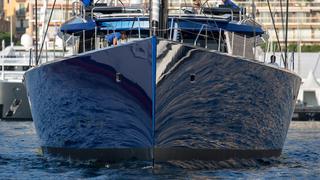 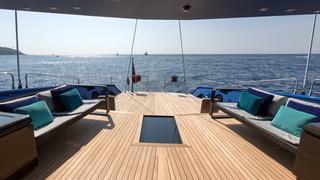 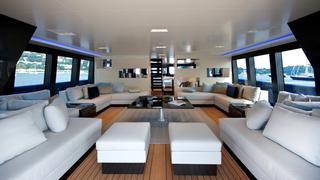 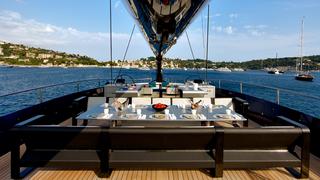 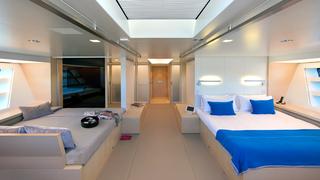 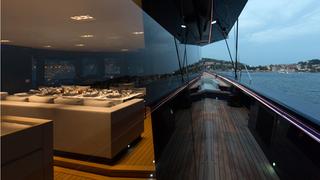 Anyone who knows Luca Bassani Antivari knows he sees the world a bit differently from most who make their living in the yacht business. Ever since he burst on the scene with his 32 metre Luca Brenta-designed Wallygator in 1994, it has seemed that he believes his job is to change the status quo and erase perceived limitations, as he good-naturedly prods and pulls yachting along with him.

A sailor for 40 years, he nevertheless appreciates that there are applications for powerboats. His 36 metre WallyPower in 2003 turned sport yachts on their collective head, and it was followed by WallyTender and Wally Lunch Boat. He showed his mastery of carbon fibre with WallySki. This summer, Bassani performed a hat trick when Wally delivered the first of a new class of racer-cruiser, WallyCento; Kanga, the first yacht from Wally’s first displacement line, WallyAce; and the first big cruising Wally, the company’s flagship at 50.5 metres, Better Place.

Surprisingly, the owner of Better Place did not come from within the ranks of the Wally sailing fleet. ‘The owner was a powerboat guy,’ says Bassani. ‘Some of our most advanced boats are built for powerboat owners.’

Advanced it is. Better Place is Wally’s first diesel-electric sailing yacht and powered via a standard shaft and feathering prop. With all three Caterpillar C7 gensets in operation, the yacht runs at 14.5 knots through a Siemens electric engine. Dial back to one generator and it still achieves 9.5 to 10 knots.

But was Better Place designed as a motor sailer? ‘We took the stupid out of the motor sailer type; the hull is a real torpedo,’ says Bassani. ‘It’s a Wally from any point of view. It’s light at 250 tonnes displacement, or about half that of a 50 metre yacht of this type. You don’t have to wait for the wind to blow 20 knots to start having fun and stop at 25.’

The torpedo part of the equation is apparent with one glance at the velocity prediction program (VPP): Better Place sails at 14 knots upwind and 17 reaching. She’s also stiff – her keel alone is heavier than Wally’s maxi Indio. Better Place is among the new breed of yachts this size completely built in advanced composites, as requested by the owner to ensure scale and comfort are balanced with performance. She draws 4.5 metres with the keel up and 6.5 metres with the keel down.

On deck, she bears a resemblance to the 2006 launch Esense, a 43.7 metre with high freeboard, and halfway along the aft main deck, windows that drop from deck level to a lower level – creating a step down to the ‘terrace on the sea’ (a semi-private aft deck for the owner, a typical feature on Wallys). Also like Esense, a high freeboard wraps around to become both coaming and bulwark, providing more protection for those on deck than a typical toe rail and a safe place to run sheets and fairleads. But that is where the similarity ends.

Better Place sports a conservatory-style deckhouse, with an on-deck wheelhouse and a living area of more than 86 square metres, which flows on to the main deck fore, aft, port and starboard from a seemingly endless array of doors and full-height windows. It provides a 360-degree view from any position. Recessed into the top of this structure is a flybridge, a first for Wally, with twin wheels forward and an expansive lounging and dining area. As with Esense and 45 metre Saudade launched in 2008, which has a deckhouse but no flybridge, Better Place’s naval architecture is by Bill Tripp, of Tripp Design.

‘We started designing this project in 2003,’ says Tripp. ‘Originally, it was to be an aluminium boat, a version of Esense with a WallyPower superstructure on top. You can see how much it developed from that first concept.’

Tripp designed the boat in an aluminium and carbon fibre version, working out the weights, balances and loads for each. The aluminium version would have weighed 310 tonnes lightship, whereas the carbon fibre version was predicted to be 265 tonnes, plus the 11.5 tonnes of mast, rigging and sails. ‘In the beginning, the market had a fear factor about 50 metres in carbon,’ says Tripp. ‘But as boats like Esense and Saudade performed without incident, it was clear risks were low. The first time we put her into the wind, she did 10 knots in 12 knots of breeze, then 12 knots in 14. What did surprise everyone was how fast she accelerated.’

The saloon, dining area and wheelhouse form one continuous area and its furniture can be reconfigured for various uses with the same facility as a Transformers toy is changed from a robot to a vehicle. A sophisticated lighting plan delineates areas and supports various tasks. Exterior seating and dining areas forward, aft and on top of the deckhouse eliminate any of the conflicts that could be associated with open-plan living.

The saloon, for example, seats 20 people as a lounge, opening fully on to the covered portion of the aft deck with even more seating. The central coffee table can be converted into a dining table for small groups of up to eight, or to augment the specific dining area for 10 forward. This dining area is also multifunctional, configuring as a lounge with a six-person sofa for watching the sailing if the weather is inclement.

When the yacht is moored, at anchor or in light air, the foredeck social area (about 43 square metres) is an excellent social space. It is accessible from the interior dining area and features table seating and sunpads for 20 people. Beyond, the forward 84 square metre expanse of teak deck hides a sunken spa pool. Winches, windlasses and two tenders are hidden under hatches as well.

With the lounging and dining space on the main deck, the terrace on the sea space was available for the owner’s bedroom in his 62 square metre suite. This suite is where the yacht’s 10.25 metre beam is used to its greatest effect. With mirrored windows across the aft bulkhead, a strip of glass in the overhead and a pair of 1.8 metre by 0.9 metre windows in the hull sides, the space is bathed with sunlight by day. At night it is lit with indirect LEDs with alterable colour settings.

A centreline corridor divides the sleeping and lounging areas of the master cabin and the dressing area from the head. A king-size bed to starboard faces aft while a modular television lounge of nearly equal size faces forward, adjacent to a desk area. The entrance to the suite is a gallery of sorts, with recessed niches for objets d’art in the white lacquered oak panelling and coloured lighting. Aft, the owner’s suite has direct access to the terrace on the sea.

Up to 10 guests can be accommodated on board Better Place in four double cabins and 10 crew in five double cabins. The guest cabins are split fore and aft of the double engine rooms and the trunk for the lifting keel. A series of doors divide the captain’s cabin and galley, mess and crew cabins from the guest areas forward.

The sundeck/flybridge, measuring more than 90 square metres, can be reached either by a staircase from the dining area or by an outside staircase from the main deck aft. Up top, tucked behind the vang and under the furling boom, is a forward wraparound seating area facing the twin wheels and sail control consoles.

A unique environmental characteristic of Better Place is her RINA Green Star certification, and she received RINA’s award for Most Environmentally Conscious sailing yacht at the Monaco Yacht Show in September 2012. Her diesel-electric propulsion reflects the latest Siemens technology and offers the power to covert some typically hydraulic ships services to electric, such as the inner stay furler and the sheet tensioning devices.

‘As soon as we had the boat set up and sailing,’ says Tripp, ‘the owner asked if he could have it for a weekend to sail to Montenegro. It wasn’t totally finished but Luca said he could sail it for a few days. The owner didn’t bring it back for a couple of months; he even cruised to Sicily and Sardinia. That was pretty amazing. I guess it means he likes the boat.’