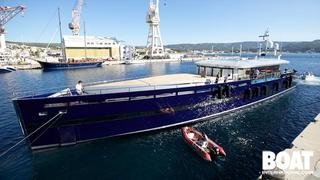 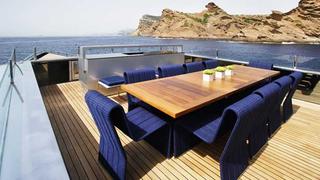 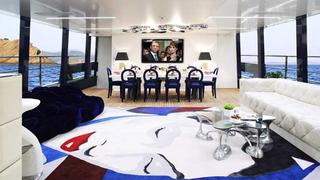 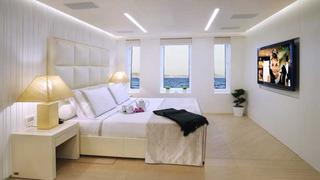 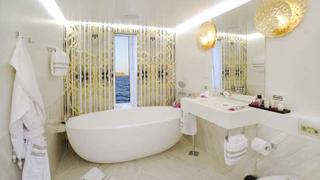 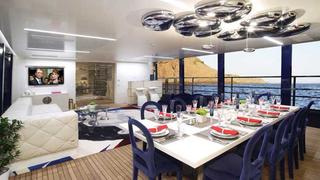 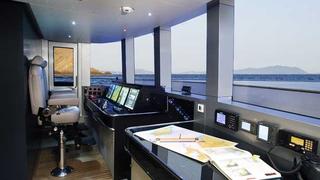 Blade: a radical makeover for a cutting-edge superyacht

When she first launched in 2010 as H2Ome, it was to great acclaim for her somewhat radical hull design and hydrodynamics, with a vertical bow and relatively narrow eight metre beam for the 44.7 metre length, which actually gave seakindly performance without the need for stabilisers. The interior was also widely admired especially at main deck level, which had been designed to resemble an open beach house complete with foliage and verandah.

Cut to the end of the year when the yacht was sold and renamed Blade. As of that moment, the yacht not only changed hands, but the new hands requested changes of such magnitude that the result would be not so much a refit, as a nine point rebuild. Thus it was decided that a total knock-down, strip-out-and-junk-it programme would be embarked upon, with a completion date as close to eight months as possible. To this end top specialists were brought in from all over Europe, New Zealand, Australia and the USA and assembled them at Monaco Marine’s Shipyard in La Ciotat, France.

The specification of executed alterations is almost akin to describing a new-build. Reverberi Design was called in to redesign the entire interior, while Dobroserdov Design were responsible for several structural and exterior changes, as well as a special ship’s logo. Opacmare in Italy created an amazing piece of engineering which cantilevers an entire section of the aft main deck up, aft and down to the water level, while gentle ramps complement broad steps. This, together with a host of similar features including a lift from the lower deck to the sundeck, was a matter of good forward thinking, since the yacht will be used extensively for charter and thus able to cater for guests with reduced mobility.

Entry is via two pairs of electric sliding doors arranged to form a vestibule containing a guest head to port and the lift to starboard. The second set of doors opens onto the saloon itself. Apart from the huge floor-to-ceiling windows, this space in no way resembles the original, although the main deck planking, which also runs through the saloon, has been retained.

The interiors are essentially white with pale fabrics and furnishings, plus light woods for the floors, which will leave the owner’s art works to establish colour. For even more light, the owner’s cabin gained an additional tall window, with yet another one in his bathroom.

For even more light, the owner’s cabin gained an additional tall window, with yet another one in his bathroom.

Out on deck, the forward superstructure appears unchanged, but it has in fact gained height in order to accommodate a 2 seat PWC, plus a 6.9 metre special-spec Castoldi tender, another 8.4 metre custom GT tender made by Vaudrey Miller of New Zealand and a custom-built 3-ton crane. The massive support structure for this crane was also custom built in heavy gauge aluminium to integrate with and reinforce the deck. Access to this ‘garage’ is now via two huge, hydraulically operated teak-decked hatches, which form the entire foretop, one hinged forward and the other aft and which meet in the middle when closed.

Right forward in the bow, the anchor capstans have been relocated and are now covered by teak deck hatches at deck level, while the anchors themselves nestle in shrouds against stainless steel plating near the waterline. Finally, the knife-edge bow is capped from bulwark to below the waterline by a polished stainless steel ‘blade’. Sidedeck bulwarks which were way too low even for basic security have now acquired MCA compliant guard rails on top in very substantial polished stainless steel and, from just forward to just aft of the saloon on each side, the bulwarks have been removed and replaced with a continuation of the same guard-rails. This was one of the owner’s many ideas, which adds protection while allowing better views of the water from inside the saloon.

Up on the sun deck, this is now enclosed by a clear glass windbreak, while the comms/radar mast has been changed to accommodate a global television and network antenna. There is also a repeat set of bridge controls for the captain, which now overlook the aft deck – ideal for stern-to docking.

Significant weight was added during the rebuild, but this has had a minor impact on performance, 34 knots being obtainable with the 5,000hp turbine and around 17 knots using just the twin C32 Caterpillar diesels. The original test reported good behaviour at sea, despite the lack of stabilisers and a draught of only 1.5 metres but, at anchor, a narrow, flat bottom on just 1.5 metres could be a different story altogether. So, as part of the programme, Blade was fitted with three Sea Keeper gyroscopic stabiliser units.

‘Blade,’ her proud captain conjectures, ‘has now become the yacht she was intended to be,’ and it’s true that, with her exceptional lines, she will be a real show-stopper for some time to come, wherever she goes. But it is the paint scheme which really catches everyone’s eye – a spectacular combination of an almost blinding chrome painted finish for the entire sundeck surround, set against a very special dark metallic blue Awl Grip, beautifully executed by Dutch painting experts Bonsink.

An incredible feature of the chrome paint, as actually witnessed, is that any blemishes can be simply sprayed over – no masking, no joins, no clouding and no ‘orange-peel’ effect. However, with her acres of teak, mirrored windows, chrome paint and stainless steel to show the slightest hand or finger-print, she’s not exactly crew friendly… But then, that would seem a small price to pay for being part of something so special.