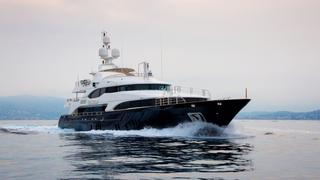 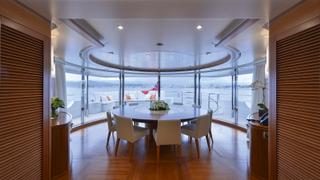 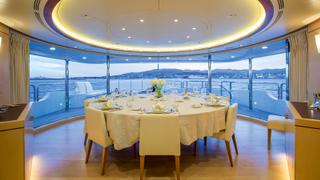 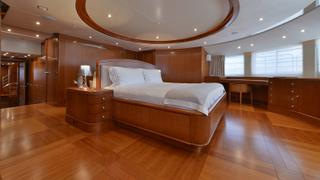 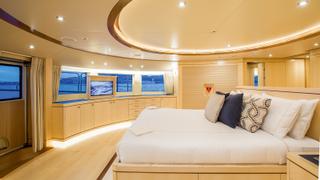 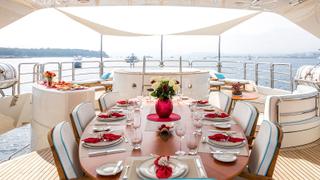 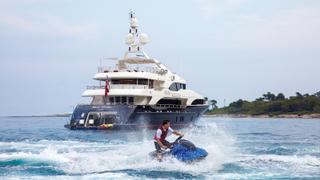 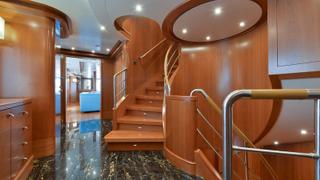 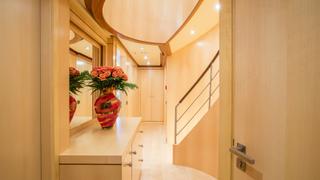 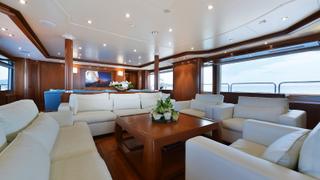 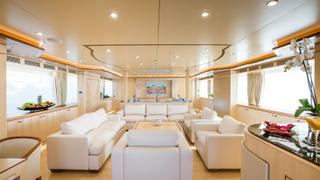 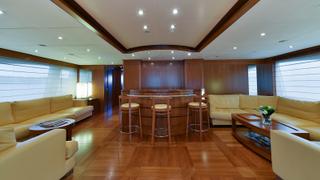 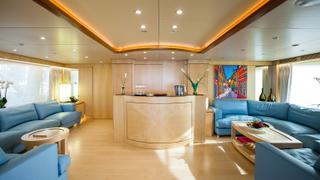 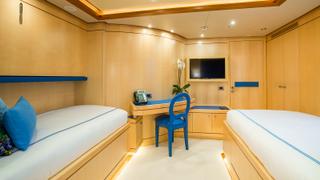 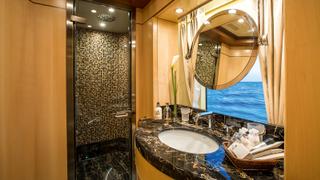 Her story might start with the oldest crew cliché in the book, but it certainly doesn’t end with one. When Miller took that gap year, she was studying architecture and, a dozen years on, she has been able to combine her two loves – yachting and design – to manage the redesign and refit of the yacht that she calls home.

Many yacht designers will visit a new client’s home at the beginning of a project, spending time in the owner’s surroundings to get a feel for their taste and particular likes and dislikes. But the owner of Blue Vision already had a live-in interior designer who knew his exact preferences.

Take a closer look at the refitted Benetti superyacht Blue Vision. All photography courtesy of Blue I Productions

There was no learning curve in the getting-to-know-you process. Miller had spent three and a half years working on board and was accustomed to this owner’s tastes and quirks. “I know him really well and can kind of see through his eyes,” she says. It also helped, she admits, that she and the owner have similar tastes, which made the design process quite easy.

Blue Vision’s captain during the refit, Tom Filby, also saw the benefit of hiring Miller as interior designer. “Knowing the owners personally – their preferences, desires and style of operation of the yacht – can be translated into a refit, rather than through third party designers who might misinterpret a brief.”

He says this existing relationship also made the refit more efficient. As Filby and Miller had worked on board Blue Vision for many years, the owner trusted their judgement, which helped to speed decisions and move the entire process along. “He knows we only want the best result – we are emotionally linked together by a common goal maybe more closely than with outside help,” Filby says.

Like any superyacht refit project, though, it was bound to be a major challenge. In Blue Vision’s case, it wasn’t a deeply buried, unpleasant surprise found along the way that caused the problems, but rather a well-publicised calamity that necessitated the refit in the first place.

She had been at the STP yard in Palma in 2015, having some engine work done between charters, when a fire broke out on board Blue Vision. A quick engine job turned into an 18 month refit. The brunt of the work was conducted at STP from 2015 to 2016 under the project management umbrella of Astilleros, and the following winter of 2016 to 2017. The yard’s project manager was Paul Grünig, and the owner’s project manager was Paul Madeley of Y.CO, along with Captain Filby assisting.

Blue Vision’s owner and crew took a scorched lemon and made lemonade. “The silver lining to the misfortunate cloud of the fire was that the owner was able to uplift and improve the interior of the yacht at the same time as repairing her,” says Captain Filby.

Miller was equally optimistic in seeing the upside to the fire when it came to refreshing the interior. “Blue Vision was nearly ten years old, so it was really time to change everything,” she says. “She used to have a very dark cherry wood, which was rather oppressive. So I suggested a lighter wood, and [the owner] jumped on the idea, and from then on it was a natural flow.”

Miller’s design brought in sycamore joinery and maple wood floors, complemented by teak detailing found throughout. “The teak is used just to give subtle dimension, like in the cornices,” she points out. The previous joinery wasn’t just staid in its traditional, dark tone. It was also ornate, with triple rounded edges and bulbous shapes defining and crowding the interior spaces. The main saloon joinery is now simple and refined.

“We sharpened everything up, put leather inlays everywhere as well as all new fabrics and blinds,” says Miller. The goal of the interior refit was to create a summery and voluminous home on the sea – a brighter, fresher, contemporary look, more in keeping with today’s charter market.

To ensure the lightened interior was warm rather than cold and stark, Miller devised a new lighting plan. All the old halogen strip lighting was replaced with the warmest-toned LED strip lighting (2,400K), and new lighting was added to the stairs and bookshelves in both the master cabin and upper saloon. It adds dimension to the cabinetry as well as creating a cosy atmosphere.

At first glance, the interior of Blue Vision might look quite plain, but when you’re on board the details are obvious, namely the silky, lush texture of the sycamore. Miller chose sycamore for its unusual grain and iridescent sheen – when the sun hits it, it reflects quite differently from other woods. Whereas oak has a deep grain, sycamore’s is very fine and gives a silky glow that illuminates its surroundings.

“But it’s really difficult to work with – the carpenters absolutely hated me,” Miller says. Modesty Yacht Carpentry was responsible for the joinery during the refit. The owner’s suite, with its two curved walls, was a particular challenge. “It seemed like wasted space to me – you couldn’t hang art due to the curve, yet the walls were very nondescript,” she says. Miller’s design called for a floor-to-ceiling wooden slat detail across the curved walls to add interest.

Studying the GA she found two little voids tucked into the walls, just big enough to be carved out for alcoves to host artwork. Thus the plain room has been transformed with feature walls that showcase two of Mauro Perucchetti’s Power of Love heart-shaped grenades. The slats enhance the sweeping curve of the rounded owner’s suite, where the bed looks forward out of an arc of wide windows.

Each of the four guest cabins below deck – two twins with Pullmans and two VIPs – stand out with their own accent colour, ranging from a bold coral to a calming sea blue. “The boss likes bold, zingy colours,” says Miller. She enjoyed playing with colour in these spaces and tying in each room’s hue to all of its details, from the embroidery to the towels in the en suites. Oceanair fabrics, Ralph Lauren curtains and Studioart leather grace the guest cabins.

Besides being on board with the owner’s tastes, Miller’s experience living and working on the yacht meant that she knew just what was needed to improve Blue Vision. It’s the norm to have the yacht’s captain involved in new construction and refits, so why not have a crew member helm interior design?

“Crew know a yacht intrinsically, what flows well, what could be changed to improve functionality,” Miller says, noting that even a seemingly minor change like relocating an ice machine or microwave can drastically enhance service. “We have the experience and know our yacht by heart and genuinely care about getting the best results for the owner.”

Beyond changing out the wood, the fire also gave the refit team the advantage of being able to start from scratch when it came to vibration and soundproofing. But there were some things the owner wanted to remain the same, such as the marble. It was all replaced with the same type of Portoro Nero marble, but in a slightly different shade – the previous tone was more brown and the new selection is more of a grey, which works well with the lighter woods.

Miller might not have had to learn much about the owner, but this was her first time designing a yacht, so there was much to learn elsewhere. What she says she found most stressful was trying to control contractors and making sure they weren’t damaging anything or making too much of a mess. Most designers have the luxury of not having to see every moment of the refit, and not having to take care of the yacht, too. Using your chief stew as your interior designer can be quite a strain.

“It was a tough refit for both of us as we took on project management roles outside of our normal yacht roles, so not only a larger workload but a very steep learning curve at the same time – balancing time schedules and deadlines, costs and budgets, and restrictions from the insurance company and Class and Flag,” says Filby. “All the crew bonded emotionally by having gone through the incident together and had an added determination to get the owner’s pride and joy back up and operational as soon as possible.”

“I probably at one point was close to a nervous breakdown, and I think I’ve aged about a decade in the last year, but apart from that…” Miller says with a laugh. “It’s been really full on, but really good and I’ve learned a lot, especially about shipyards. And it’s been quite exciting to do something outside the normal stewing role. I’d love to do more projects, I enjoyed every minute of it.”

Post-refit, the feedback from owner and guests has made everything worth it. “Many of the charter guests this year have made a point of letting us know that it was, in fact, the light interior that sold [Blue Vision] to them and had she been in the old, dark style they would have chosen differently,” Miller says. “Now it’s a place you can’t help but feel happy in.”

From the ashes, Blue Vision has risen as a bright and beautiful phoenix.

First published in the March 2018 edition of Boat International.