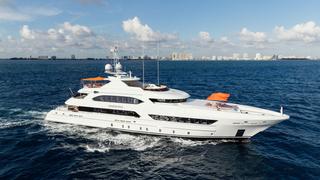 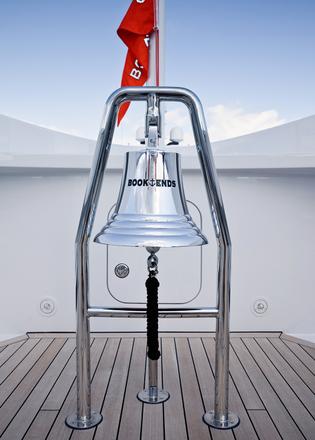 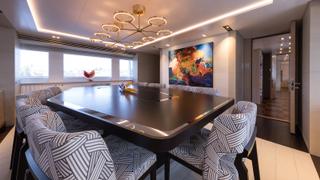 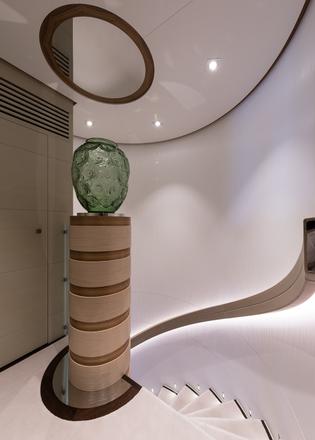 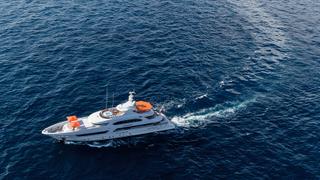 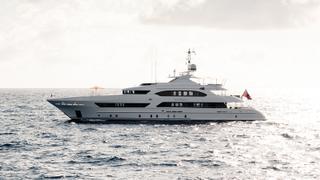 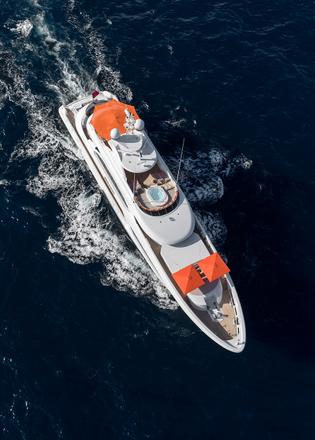 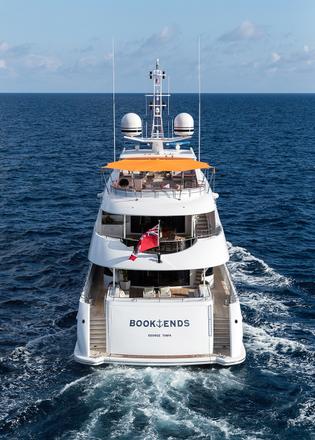 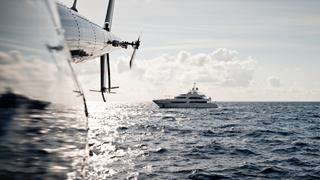 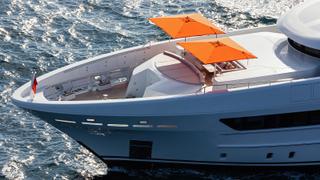 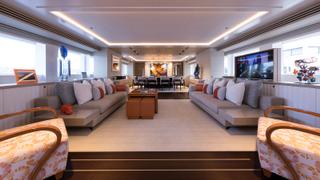 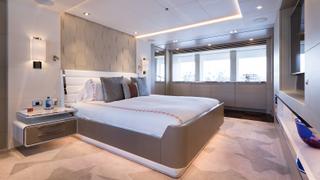 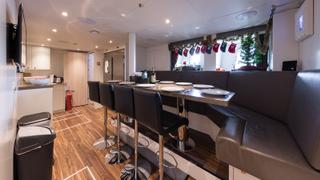 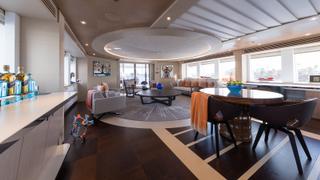 Bob Book was nearly ready to throw in the towel on yachting when he found Heesen Yachts’ spec-built 47 metre Project Ruya ready for delivery.

His previous yacht had sold much more quickly than planned, leaving him boatless as he spent two years making trips to Europe with his wife Amy and his crew searching for the ideal well-kept, pre-owned yacht. It was a shopping endeavor the Books turned into a travel adventure, exploring everywhere they went and falling in love with Italy and its gastronomic delights.

But when three deals fell through after failing inspection, his window to make the 2017 Mediterranean cruising season with his yacht-owning friends was narrowing. “I said, if I’m not in the Med by this summer, I don’t think I’m going to stay in boating,” Bob Book says.

It was a tragic proclamation from a prolific yacht owner who has had 17 boats by the same name — Book Ends. Luckily, a phone call from Heesen’s North American sales director Thom Conboy kept him in the boating game.

“It was like divine intervention,” Book says of Conboy’s call. “I told him: ‘If we can agree on a number, I will be there in 48 hours with my full crew and I’ll go through the boat.’” So within a few days, Book and his crew were walking around the yard in the Netherlands, figuring out what would be the next Book Ends.

It wasn’t their first time at the Heesen yard — Book had passed through nearly a year and a half earlier and had been impressed by its cleanliness, attention to detail and the big digital clock above the shed counting down to a launch. At the time, the Books didn’t even go on board what would become Book Ends. They had originally been looking for a 50-55 metre yacht, but on this trip they were satisfied to find everything they needed in a smaller footprint.

Book Ends is the 13th hull in Heesen’s successful 47 metre steel series. The builder attributes this popularity to the classic-contemporary exterior by Omega Architects, a highly optimised interior layout that ekes out every cubic centimetre of space, and generous decks with a larger-than-the-rest-of-her-class superyacht sundeck topping things off. All these were items on the Books’ wish list, along with stability and long range.

The couple’s first large yacht was a Westport 112, and they later moved up to a Westport 40 metre. “We got on the 40 metre and said, famously: ‘This is the last boat we are ever going to need,’” Book recalls. The 40 metre was used liberally over two and a half years — New England in the summer, the Bahamas in winter. “But I always dreamed of doing a summer in the Med,” he says.

While the fast speeds and shallow draft of the GRP-built Westport were ideal for the Bahamas and US East Coast cruising, Book was seeking that extra stability and increased range for his next yacht. The full-displacement steel hull and 4,000 nautical mile range of Heesen’s 47 metre fitted the bill perfectly.

After coming from the consistency of production-built Westports, it’s not surprising that Book was attracted to the proven semi-custom Heesen. The irony, perhaps, of the 47 meter being such a successful series is that it was never planned as one.

The first, Yalla, was designed and built for a specific owner in 2004, and subsequent sister ships followed, including one named Lady Petra (later renamed Como) for Frans Heesen himself. The builder still prefers to think of the series as sister ships, and various window styles over the years and a recent series refresh mean that no two look exactly alike.

“When you look at them together, they are all a bit different,” says Sara Gioanola, PR and press office manager at Heesen. Exterior stylist Omega Architects redesigned the series with Elena, which was declared best displacement motor yacht below 500GT, 44 meters and above, at the 2015 World Superyacht Awards.

“The total stature of the exterior has become more like a helmet or egg shape,” says Frank Laupman, of Omega Architects. “We learned from motor yacht Sky, a one-off custom 50 metre, how to give more body to the exterior and make the vessel look bolder. We also made more distinctive and bigger windows on the forward main deck. The scale of the total of [glazing] openings was changed to enhance the bolder look of the vessel.”

Other changes in the redesign included making the mast a triangular shape to create a more balanced and “gentlemanly” look, as Laupman describes it, and enclosing the rescue tenders on the foredeck.

Book Ends is the third build since the refresh, and the enhanced glazing was a selling point for the owners. “I liked how light, bright and open it was,” says Book. “I had looked at a boat in another Dutch shipyard that was very boxy inside. Even though that boat was bigger, I liked this one better.”

Book’s favourite colour, orange, is seen as an accent around the yacht, from Hermès throw blankets, pillows and leather details to the crew uniform and the unusual bright orange dock lines. (His other boat, a Viking sportfish called Book Ends Team Hookers, has its hull custom painted this same glowing shade.)

The orange footstools in the main salon were actually already on board, part of Bannenberg & Rowell’s interior design for the spec Ruya project, and maybe a sign that this was the right boat all along.

Though coming into the build as it finished, the owners have finessed the original interior design to suit their needs. This meant removing some of the furniture — there was simply too much of it, they thought — and changing some of the woods and carpets that had patterns they found too busy.

They also added about a dozen LED spotlights in the main salon and dining room to change the atmosphere. The Books have further personalised the yacht with their artwork, which brightens up every space. They like to bring back art and mementos from every place they visit. Another personal touch is the nautical-themed mezuzahs that grace each doorway, made by an artist in Israel.

Book acknowledges that a yacht purchase always involves some level of compromise. But buying a yacht so close to being finished means some things are harder to change than furniture or rugs. “The biggest compromise I made with this boat was sharing a bathroom,” he says.

Rather than separate his-and-hers en suites, Book Ends has a standalone marble bath in the centre of a large master bathroom with a pair of hand basins to port and separate shower and head cubicles. This design is seen on some of the other 47 metre sisters such as Blind Date.

Overall, the main deck master suite is suitably “light and bright,” with light grey panelling, a white leather headboard and large windows. There are four guest cabins on the lower deck — two VIPs and two twins with Pullman bunks, ensuring enough space for the Book family, which includes three adult sons as well as grandchildren who enjoy spending time on board.

“A boat is a great way to keep the family together,” says Amy. “You know [the expression] ‘if you build it, they will come’? Well, if you have a boat, your family will come and spend time with you, and that’s the best — our children come, our grandchildren come.”

The 47 metre series offers great flexibility in its layout, the builder points out. “It can also work very well with a private owner’s deck on the upper deck,” Gioanola says, “which was [the arrangement] on Lady Petra and Celestial Hope.”

The detailed raised ceilings in the master suite and the saloons add a sense of space, making each area seem larger. Indeed, the overall headroom and spaciousness in the crew areas was a plus for Book, who points out the high ceilings in the pilothouse and the wide crew passageways.

The crew are very much a part of the family, and it was important that they have comfortable accommodation and be able to move around the boat with ease. “There’s so much storage on this boat,” says Amy. “Usually your crew will be complaining there’s not enough storage, but we have more storage than they’ve been able to fill.”

After the Books’ long-time captain passed away at a young age, their friend Andrea Bocelli, the renowned Italian singer and songwriter, recommended an Italian ex-navy officer and his former captain, Antonio Gerini, for the job. He was instrumental in readying Book Ends for its maiden voyage in the Mediterranean, bringing valuable knowledge of summer cruising grounds around Italy.

“The boat is the strongest boat I’ve been on, even more than an explorer vessel,” Gerini says. During the trial voyage to Gibraltar Book Ends went through days of six metre waves. “The seas crossed the bow and were hitting the wheelhouse, but she still felt sturdy.”

The skylounge is a particularly peaceful spot. Its circular walls are mimicked by rounded lifted ceilings and a large round rug and coffee table below, flanked by a quartet of chairs and a low sofa. “It’s really Zen with this circular ceiling, circular table and circular rug. We made a few changes but not many,” says Amy. “It’s a very soothing space.” There is also a games table with mid-century-inspired leather chairs, so the room easily transitions from peaceful to playtime.

The 47 metre series is known for its outdoor spaces, devoting almost 185 square metres to exterior decks. The cosy bow seating area is the owners’ preferred place for sunsets, cigars and taking in the Mediterranean vistas that they’ve finally reached after all these years.

Above, the sundeck is sprawling, taking up 83 square metres, with a superyacht spa pool forward surrounded by sunpads, some loose lounging chairs, a bar to port and a large seating area aft. It’s easy to picture the entire family enjoying time here, or equally being the setting for a larger party. “The sundeck is incredible,” Book says. “We have parties, we host friends and family. I rarely do business entertaining on the boat. It’s not a business tool for me — yachting is our sanity.”

Book Ends is testament to how a spec-built model can equally suit yard and owner — and save the latter when they are at their wits’ end. Thankfully, this owner found the right yacht before he put away his deck shoes for good.

First published in the November 2017 US edition of Boat International