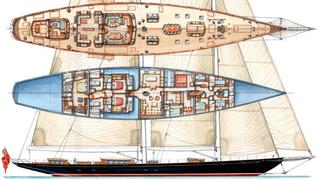 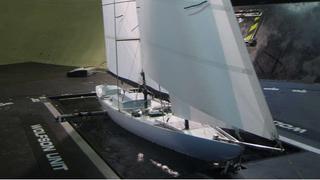 The stats are impressive enough. Measuring 62m overall, Athos has a beam of 10.9m and weighs 390 tonnes at half load. Her 1,980 square metre upwind sail area requires the largest carbon rig ever made by Rondal, with a 54m foremast and 61m main.

Holland Jachtbouw (HJB) is building Athos fully to MCA and Bureau Veritas rules, and she is the largest sail yacht ever built in aluminium alloy 5383.

The early decision to use this strong, high modulus material was the first of many premiers for a hugely ambitious project that revolves equally as much around technical sophistication as her imposing size.

‘This project has been a process of continuous development driven by the owner,’ says Zijlmans, production director at HJB. ‘He adores engineering and constantly endeavours to push the needle of efficiency. The owner is not afraid to take risks and while confident that we can pull it off he is also taking his own share of the responsibility, right down to warranty issues.’

Many of the requests have involved installations and systems that were simply unavailable on the market and therefore had to be specially developed. It is clear that the flexibility offered by the World Class Manufacturing principles which HJB follows has proven indispensable for coping with these new developments.

Designer Andre Hoek was on the front line of this evolutionary process from the outset, and worked on the owner’s previous sailing yacht.

‘In 2005 I took him to see the 55m ketch Adèle and he loved the twin deckhouse owner’s privacy concept that Hoek Design pioneered on this yacht. Initially, he felt that Adèle was a little too large for his requirements, which seems ironic now when you consider how the project grew from 44m to 58m by the time HJB joined the team in 2006. As we developed Athos, more space was added for the crew, guests and equipment.’

Within weeks of HJB winning the tender, the owner had added a further four metres to Athos in order to cater for a new positioning for the boom vangs and increase the size of the engine room. He also began to devise the most powerful hydraulic system ever installed in a sail yacht to date; a monumental feat of engineering that would eventually require over 30km of wiring and a great deal of smart thinking.

‘The initial brief for a 90kW bowthruster was superseded by a request for a more powerful bowthruster,’ remembers Zijlmans. ‘The amount of power [150kW] was unprecedented and when it became clear that he would have to finance some serious development work, the owner decided to commission a sternthruster at the same time with the same power.

‘Moreover, both thrusters had to be able to be operated simultaneously with both main engines running on a fixed rpm of just 1,500 because he also wanted to have the option to run the complete installation in combination with gearbox-driven generators. This was quite a puzzle to work out and required well over 2,000 engineering hours.’