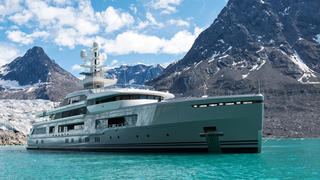 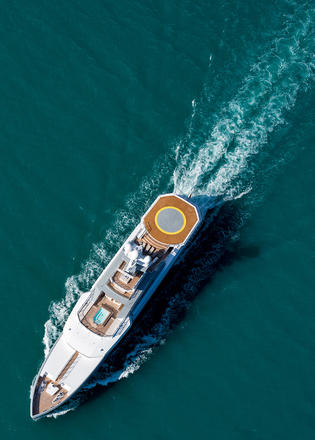 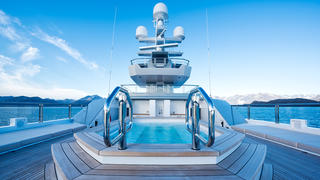 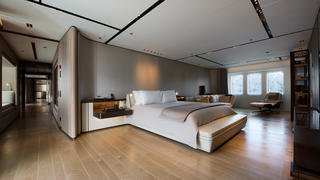 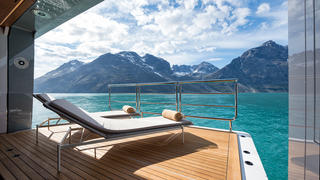 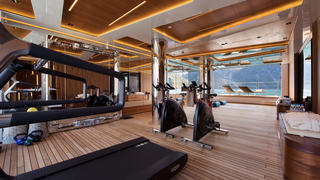 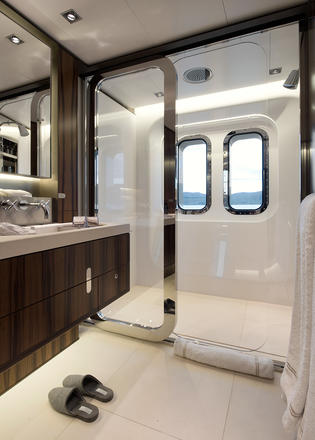 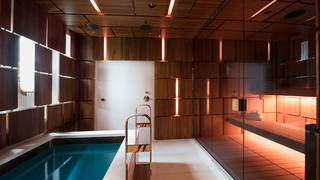 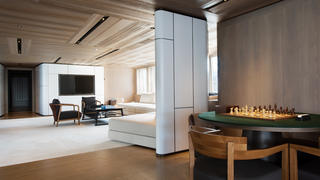 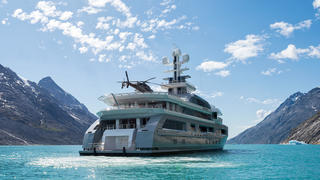 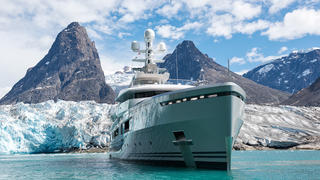 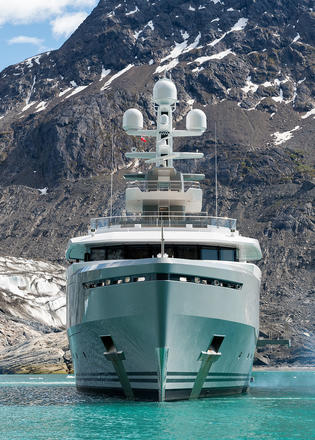 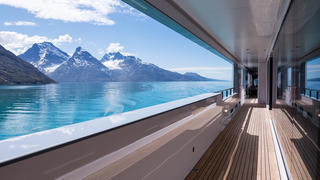 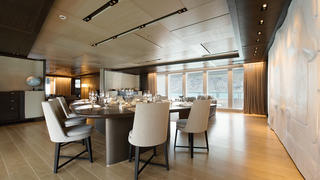 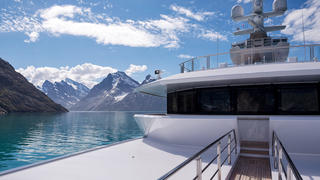 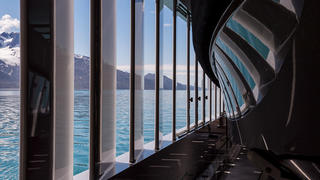 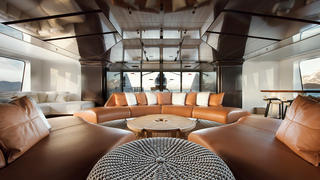 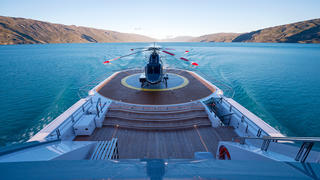 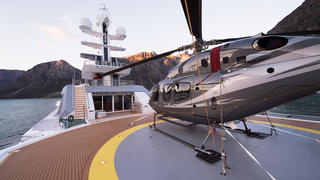 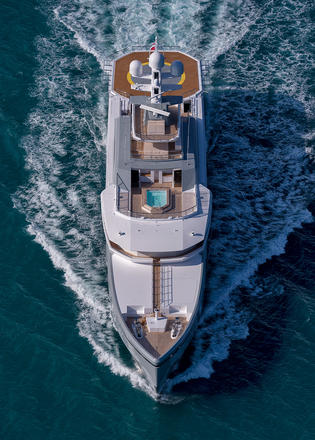 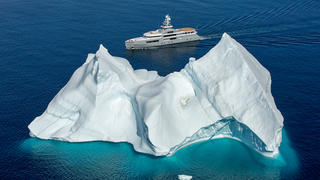 In some ways the story of Cloudbreak is one you’ve already heard — a man who could not find the yacht he really wanted, so set out to build his own. The result, though, is a yacht the likes of which you’ve never seen, a high-tech floating “chalet” with a superyacht helideck (certified for commercial use) for its custom Bell 429 Global Ranger, a ski room, a fireplace and the largest toy chest ever built. The yacht owes her name to a wave in Fiji that daring surfers rank among their favourites. And it’s very apt.

There is no need to meet Cloudbreak’s owner to understand that he is young, fit and adventurous. That is obvious from the fast boats he carries on board, the air tender (which the pilot calls an “amazing machine controlled basically by three iPads and a joystick”), the dynamic-looking crew, the extensive fitness and spa area and the amazing sound and light systems.

Two of the owner’s passions are surfing and heli-skiing and, as every skier knows, a big part of the experience is après-ski. The yacht’s soothing sauna, massage room and chilled plunge pool provide the ultimate in relaxation after a day of biting cold and strenuous downhill action. Cloudbreak also switches into party mode quickly with an array of lights and speakers.

“Cloudbreak is for an outdoorsman and a lover of nature,” says the yacht’s Norwegian-born designer Espen Øino, himself a “fanatic skier” and watersports amateur. At the launch party, the owner remarked how close the yacht — poised to embark on the first of many adventures — was to the first sketch that Øino gave him.

The designer credits the owner, who provided a list detailing every single piece of equipment, toy, tender and board he expected Cloudbreak to carry – all of it “very valuable input” in deciding specifications. It’s clear that they were kindred spirits. When the owner asked for outdoor beds, Øino, who lives in Monaco but remains in touch with his Nordic roots, did not hesitate. “Outdoors people really love to sleep outside,” he says.

But The Revenant this isn’t; guests and charter clients on board Cloudbreak will not be roughing it. Yes, this 72.25 metre steel vessel has an ice belt and possesses the spirit of an explorer, including what Øino calls an “integral wave breaker” in the inclined bulwark forward, but she’s also a luxurious and sophisticated yacht, evidenced by little touches such as automated doors and heated floors in the showers.

Much of Cloudbreak’s refinement stems from the original and subtle interior design by Christian Liaigre. This is the French architect/designer’s fifth yacht and his second large motor yacht interior (the first, a 55 metre Amels, is strictly private). Guillaume Rolland, a Breton and lifelong sailor, heads Liaigre’s yachting division and his work is informed by his profound understanding of the ocean environment.

“The owner is going to use Cloudbreak often in areas where the weather can be extreme, so it was very important to create a welcoming ambience,” says Rolland. “[He] also didn’t want a dark environment. These were the guidelines that we used to create a comforting colour palette.”

Quite. The décor is anything but dull or uniform. A liquidambar veneer adds contrast to lighter woods, such as Hornbeam on the floors, brushed or scored pine and oak added for texture, and lacquered surfaces. Rolland aimed to emulate the warm and welcoming atmosphere of a chalet, but his interpretation is far removed from the wooden A-frame with antlers over the fireplace. “It’s just timeless, beautiful design,” says Jim Evans, managing director of SuperYachtsMonaco, the company that sold and managed Cloudbreak from construction to charter.

It’s also a little “techie” — aeroplane interiors informed an interesting treatment of the guest cabins’ outer walls, painted with lacquer and curved to give the impression of a shell. The shapely white surface picks up and amplifies the light flowing from the portholes during the day. It is one of several ways the interior designer has modulated and amplified the perception of space on board Cloudbreak. Curves are a bit of leitmotiv and hard angles are few on this yacht. “I have spent enough time on boats to know what a sharp angle feels like,” says Rolland.

A standout interior feature, both visually and conveniently, is a 60 metre long corridor on the lower deck that leads directly from Cloudbreak’s huge beach club — formed by a massive transom door plus a gym, sauna and massage area — to the five guest cabins and crew quarters. “It’s never pleasant to leave the sauna or the gym and have to walk in front of everyone in the saloon. This way you can return straight to your cabin,” says Rolland.

Technically speaking, this seemingly simple solution was a challenge, because the corridor goes through the upper level of Cloudbreak’s engine room. It’s perfectly soundproofed and decorated with a succession of arch-like features that provide natural-looking light. It’s not until a well-concealed door is opened that the rumble of two 16-cylinder Caterpillar engines (the generators are enclosed in soundproofed compartments) becomes evident.

“It was a huge effort for the shipyard to install this corridor here because they had to rethink the whole ventilation system for the engine room,” says Till von Krause, director of sales at Abeking & Rasmussen. The soundproofing, on the other hand, is one of the builder’s specialities – its commercial division has built minesweepers.

Another eye-catching space on board Cloudbreak is the winter garden on the upper deck. “We had endless discussions about whether this is an interior or exterior space and I don’t know that we fully resolved it,” says von Krause in jest. Nevertheless, it works perfectly well as both. The large space, furnished with low seating and tables, can be fully enclosed with glass and heated, or opened completely to become an exterior space.

Below, the outdoor space of the main deck aft has been given over to store Cloudbreak’s two large tenders. “The tenders are so enormous that you couldn’t fit them within the watertight-bulkhead position [without interfering with stability],” Øino says. A system of louvres conceals these tenders from view while allowing light in.

The rest of the toys – and there are many, from a high-powered Centurion Enzo wake boat with a gantry “that blasts you with enormous sound”, in Evans’s words, to a slew of inflatables tightly packed in colorful boxes, including a giant pineapple and toucan — are stored inside a cavernous garage forward of Cloudbreak’s master suite. It’s worth noting that even this functional space is neatly finished and painted, as are all technical spaces on board.

The tank deck is an example of beautiful engineering and space planning in support of a yacht’s mission — she needs to be self-reliant in remote areas. Based on a naval platform closely related to the Abeking & Rasmussen yacht Aviva III, Cloudbreak has a similar vertical bow but longer hull lines, which has allowed the envelope to be pushed a bit further in terms of efficiency.

Her range is around 8,750 nautical miles at 12 knots, but autonomy is not just about the fuel, it’s also about the ability to carry supplies, fresh food, make fresh water and treat and store waste until Cloudbreak reaches a port with sufficient infrastructure. Aside from two large messes for the crew, complete with a practical galley to feed up to 22 of them, this deck is dedicated to machinery, with a massive sewage treatment plant, air-conditioning room, freezers, fridges and stores.

It is what happens above the water line, though, that will fire the imagination of adventure-seekers. On Cloudbreak’s main deck is an itinerary-viewing room at the entrance of the saloon, where low seating faces a row of screens. The ultimate infotainment system for an explorer yacht, YachtEye, from Oculus Technologies, pulls information directly from the bridge and combines it with Google Earth images to provide visually appealing 3D information as to heading, location, speed and more.

Above the saloon and informal dining area, which is furnished with an unusual triangular table and sofas looking out of floor-to-ceiling windows, is Cloudbreak’s huge panoramic upper saloon.

Above that, forward of the helideck, is a circular room with a cinematic screen to view the day’s action recorded on GoPro cameras. Skiers returning from an expedition on the helicopter will be able to drop their gear, warm up inside with a drink and review the day’s action on screen.

Right behind it is a glass-enclosed superyacht elevator to reach the owner’s suite on the main deck and the guest cabins on the lower deck. Flexibility is built into the accommodation, with one cabin that can be used for crew or guests, depending on need. The helicopter pilot, an essential part of the team and the charter programme, also has his own cabin on board Cloudbreak.

The helideck, complete with refuelling facility, doubles as the party deck. California Audio Technology provided and installed the marine-grade speakers and woofers scattered through Cloudbreak’s decks. Some are permanent features, rising from underneath the decking or inserted into the superstructure; others can be tied to the railing around the helideck for a party. An extensive set of lights — on deck and under water — with myriad colour combinations, completes the party scene.

More contemplative is a private space half a level above the bridge, complete with Cloudbreak’s pool (it is large enough for 10 people, so you could still make it part of the party). Above is a sofa and beds, which can be enclosed with nets, for nights spent under the celestial vault. And then higher still is a private crow’s nest, providing a fantastic viewpoint.

A cruise in Norway proved its usefulness. “You go into these fjords and it is like a lake – you just look up to the mountain and when you come around a turn, you don’t know what to expect. The forward view is important and also the ability to look up,” says Øino, who received daily updates from Cloudbreak’s enthusiastic owner while the yacht was in Norway.

Keen on details, the owner mapped out the yacht’s itinerary with the same attention that he brought to Cloudbreak’s construction, says Evans, who met him eight years ago. The first meeting they had was quite brief and business imperatives brought an abrupt end to it. However, the several years that followed were put to good use.

To assist him in his task is a multi-talented crew (with degrees in everything from surfing science and sound engineering to graphic design, as well as a slew of certifications from beautician to paramedic). The professional and attractively designed bridge on Cloudbreak offers him many views of the ocean, including one below the surface thanks to a forward-looking sonar from FarSounder.

First published in the September 2016 edition of Boat International

Out of this world interiors on 81m Abeking & Rasmussen yacht Romea