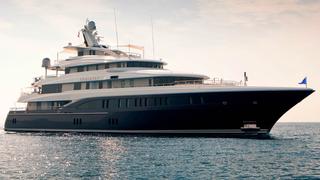 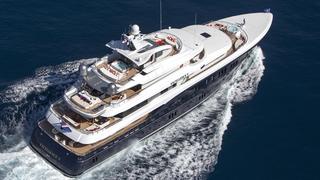 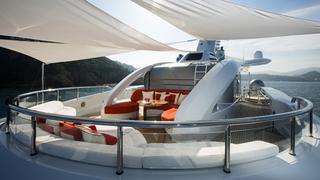 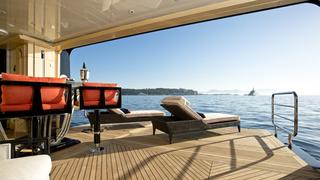 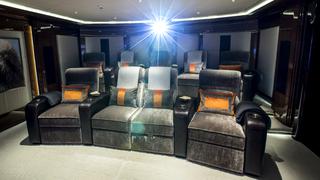 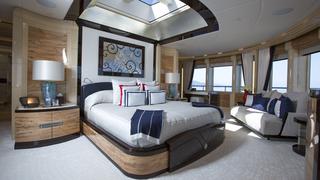 Excellence V, the superyacht built with the charter market in mind

Excellence V has the luxury of space where it matters, which gives her wide side decks, a five-level lift encircled by a central staircase, three hull openings for boarding from the sea, large main-deck guest suites, a dedicated cinema, a water-front gym, a beach club, an owner’s deck and multiple outdoor lounges and spa pools.

‘The exercise was how to put the interior of a 78 metre superyacht into a 57 metre hull, and then we stretched it to 60,’ says Captain Shore. Shore has been with owner Herb Chambers since 1989, and the two of them have built a hugely successful charter following with their yachts, starting with the original 38.7 metre Feadship that was the first Excellence. ‘When he started designing this boat, more room was key, as was incorporating things not heard of five years ago,’ says Shore. ‘He knows what he likes, and we use a lot of input from our repeat charter guests.’

Thirty years of offering his yachts for charter has given Chambers an acute understanding of the market and what makes a yacht a success. For example, there is a handsome double cabin on the upper deck, just aft of the master suite and opposite the office, designed to accommodate a charterer’s children, bodyguard or doctor. An adjacent door, hidden in the paneling, gives this cabin access to the deck’s pantry and to the stairs to the galley and crew areas below, should the person occupying it be a staff member.

Flexibility is why there are three hull openings, too. By putting the beach club amidships to starboard, guests congregating there aren’t bothered by the launch and retrieval of the tenders, which happens at the stern, or by the use of the portside platform that doubles as a crew tender access point and a waterfront gym or massage room. Flexibility has also driven the provision of 10 different outdoor spaces for guests, including three bars and seven lounging areas.

A small asymmetrical saloon with a bar on the starboard side and a cool wood floor, leather walls, crocodile tabletops and velvet chairs forms the transition from the aft arrivals deck to the interior. Forward of this is the dining area, set apart by its leather flooring, Macassar table and black emperador marble and white onyx countertops. This splash of drama sets the stage for the beautiful and dramatic foyer, with its gleaming glass lift, marble floors and a custom stair surround that is a majestic, four-storey, deco-style tableau of transportation.

A stairway takes guests on board Excellence V to a lower foyer opposite the beach club, and glass walls with a sandblasted pattern are all that separate them from the blue beyond when the club deck is lowered. Pass through the glass doors and this club is like an island. It has a shaded bar, a seating area and open teak decking large enough to host a couple of lounge chairs just above the surface of the sea. With its access to the stairs and lift, it’s a great place to arrive by tender.

The beach club isn’t the only reason to venture to the lower deck of the superyacht; forward is a state-of-the-art cinema with 102-inch screen and nine reclining chairs that vibrate along with the heavy bass audio tracks of action movies. A ‘candy store’ and beanbags for children complete the scene.

As pleasant as the guest cabins on Excellence V are (two twins, two doubles, and a VIP), the master suite is the sort of show-stopper you would expect of an owner with 30 years’ experience of messing about in boats. The suite’s subtle arrangement of doors and stairways helps give the owner privacy or informality when needed, and allows him to interact with the captain and crew. A fore and aft private outside staircase takes the owner down to the main side deck, while a circular staircase brings him directly to the bridge deck above. Thus the owner can arrive by tender or passerelle at the stern and move to his suite without going through the rest of the superyacht.

But the pièce de résistance is the waterfall, which splashes down the back of the superstructure and seems to disappear under the sole, only to reappear in a glass-fronted spa pool flanked by a bar with stools and sunpads. It’s a fitting feature for this yacht, which with equal emphasis mixes youthful relaxation and fun with the highest quality finish and technical sophistication.

Excellence V is available for charter at rates starting from €595,000 per week.