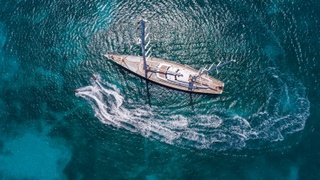 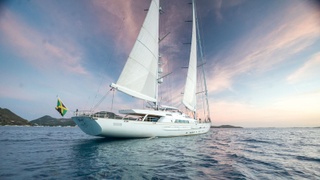 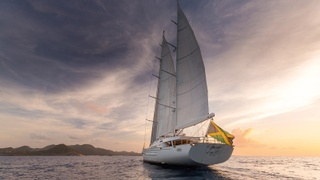 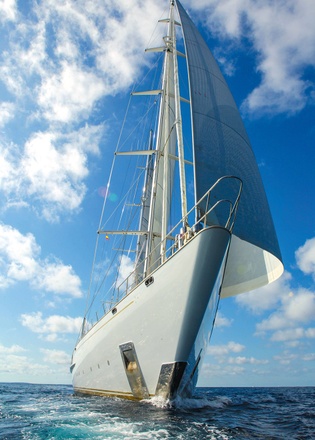 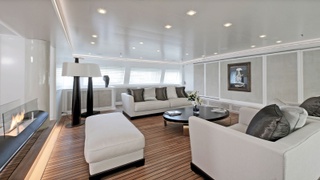 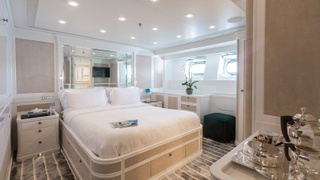 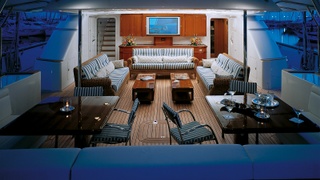 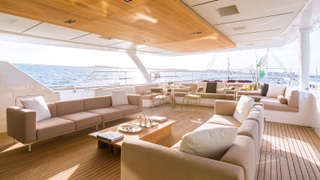 Family spirit: Inside the refit of 64-metre Perini Navi ketch Spirit of the C's

A major refit has managed to harmonise both the design of a 64-metre Perini Navi ketch and the disparate needs of a diverse family. Clare Mahon enters into the Spirit of the C’s

An all-out refit doesn’t have to obliterate the character of a yacht. It can, in fact, enhance it. When the 64-metre custom Perini Navi ketch Felicita West changed hands, Rome-based architect Michela Reverberi transformed the interiors of the yacht that is now called Spirit of the C’s (the 14th largest sailing yacht in the world).

But what at first glance may look like a gut renovation was actually done with a light, respectful touch that took into consideration both the varied needs of the new owner’s family and the yacht’s rich heritage – while strengthening its relationship with the exterior design.

“Our goal was to make the yacht as a whole more harmonious,” says Reverberi. “Before the refit her exterior was timeless, but we wanted to update and brighten up the interior, opening it to the outside while also bringing the yacht’s white and bleached teak exterior tones inside.”

Launched in 2003 for an owner who was on his third Perini yacht, Felicita West was a collaboration between the Italian yard, Ron Holland and Nuvolari Lenard. At the time she was Perini’s largest build in aluminium and, while her hull colour and material were unusual for Perini, her interiors were ultra-classic with abundant use of polished wood and cosy chintz.

At first her new owners set a time frame of six months for the refit, but that proved to be unreasonable. As Reverberi explains: “The work was done at Compositeworks [now MB92 La Ciotat] and they didn’t have a slot ready immediately. And there was also a bit of discussion on the couches.” Couches? Holding up a major refit? “Well, it’s not as simple as it seems,” laughs Reverberi. “The yacht is called Spirit of the C’s because it has to capture the essence of an entire family’s worth of strong and varied personalities. Their last name begins with a ‘C’, which presented a great opportunity for a little play on words.”

In this family there are party animals, artists, business people and designers. Some who are not part of the nuclear family are still considered family members and everyone had to have their say and their space. She wanted colour, but he wanted all white; a brother-in-law wanted neutral tones, but the sister-in-law didn’t agree. If this sounds like a nightmare in the making, it wasn’t. “We had a great time and became real friends during shopping trips and tours of Milan’s Salone del Mobile,” says Reverberi. “These are really interesting people; it’s not often that work is this much fun.”

While the Cs were scouring the Salone del Mobile, major work was going on at La Ciotat. “The party animal in the family wanted a proper sundeck for onboard entertaining,” says Reverberi, “so we lengthened the classic Perini Navi flybridge by three metres and added a spa pool and lounging area so he could get the party started.”

Captain Franco Guardi points out the areas that were reworked: “The helms and the crew area are the same as they used to be – all curved lines, polished teak and lots of cherry wood – but the aft area has been entirely rethought.” What once was an open area can now be covered by an electric awning.

“Not everybody wants all that sunshine,” Guardi points out, “and the air is still great up here.” Upholstery has been changed to a sandy-coloured terry cloth and other subtle changes were made to update the mood. “The dining table was in polished teak with thick, curved edges and seating was on banquettes, a set scheme that couldn’t be changed or adapted. Now the table is in square-cut white marble and seating is on free-standing chairs that can be moved around depending on where they’re needed.”

The same honey-toned teak that is used on the clean, contemporary bar also lines the sides of a new spa pool under the mizzenmast vang. Low teak daises with cushions can be sofas or sunpads. “And the entire new sundeck area, including the bottom of the pool, has skylights to bring light to the main deck guest cockpit below,” says Guardi.

The guest cockpit aft has kept the same general arrangement as before, but wicker couches have been replaced by more contemporary seating by Paola Lenti. Here too, table tops have been changed from thick polished teak with curved edges to white marble. But while alterations in furnishings have updated the yacht’s look, changes in technology have allowed for a significant upgrade in its liveability. The wide strip of honey-toned teak that runs down the centre of the ceiling conceals a drop-down flat screen and new LED lighting. “In 16 years technology changes,” says Guardi. “These are all things that didn’t exist when the yacht was Felicita West.”

Installing a flat screen in the ceiling meant that Reverberi could eliminate a large television cabinet that had been at the fore end of the cockpit, opening up a world of possibilities. The sliding glass doors in polished chrome frames that now lead to the saloon look like they have always been there, when in fact they are one of the refit’s biggest triumphs.

After eliminating the television cabinet from the guest cockpit, Reverberi ripped out another large cabinet that had been at the aft end of the main saloon: suddenly she had a wide-open space to work with. “The owners’ brief was for a lighter, brighter and more modern atmosphere,” she says. “They wanted to maintain the yacht’s typical Perini Navi elegance but let in as much light as possible. And I wanted to create interiors that were as timeless as the yacht’s exterior while still reflecting the spirit of the family that now owns the boat.” By eliminating the cabinetry and enlarging what had once been a small starboard door, Reverberi updated the yacht’s look and added a significant new source of light to the main saloon.

You can almost hear the sound of cherry wood splintering when you compare the interior before to the interior after. Reverberi exposed the trunk of the mizzenmast. “I wanted to bring out its sculptural, functional shape,” she says. By replacing the previous wooden door with a glass one and surrounding it with reflective chrome frames and a mirror she has created the illusion of a full-width double entrance. “It’s an amazing new source of light, and removing the cabinetry also significantly increased the size of the saloon. I used the two pilasters that had delineated the cabinetry as supports for a free-standing, glass-encased gas fireplace that I designed myself.”

The mirror and fire dazzle, and so does the brightness in the main saloon. But if at first glance it looks as if Reverberi tossed all of the previous interior into her fireplace, on closer inspection you can see what clever use she made of what was already there. While she removed most of the panelling above wainscot height, she kept what was below and painted it white. For colour and warmth she added central panels in roughly sueded leather in a light grey tone that are also an excellent backdrop for the owner’s wife’s artwork. She updated the lighting and air-conditioning system by adding a small drop in the ceiling and installed new flooring in caulked teak that creates a sense of unity between indoor and outdoor spaces.

If the party animal had his space on the flybridge, and the artist had her neutral-coloured walls to admire, the family businessman was still looking for his perch. To that end, Reverberi added a door on the port side of the main saloon to convert a space there into an owner’s office whereas previously it had been for the captain, accessible only from the bridge. An update to the communications systems allows the owner to stay aboard longer, using his yacht for business as well as for pleasure.

In the dining area, panelling that wasn’t removed was painted white and vitrines were replaced with more modern wine coolers. Reverberi also removed a bar that was at the head of the stairs to the crew area. “It cut off the space and there wasn’t enough room for a proper dining table,” she says. By adding a different bar starboard there is now seating for 20 guests – all of the Cs and then some.

While Reverberi also significantly altered the staircase that leads to the guest cabins, she left the cabins themselves essentially the same, painting over the cherry but leaving the layout untouched. “The quality of the stone in the bathrooms and the carpentry is amazing. But I simplified the furnishings in the owner’s cabin to leave more free space,” she says. The owner’s wife now has room to do yoga in the privacy of her own cabin.

With a combination of stripping back and painting over, Reverberi has managed both to update and to preserve: while spaces are fresh and new, you can still sense the substance of the Perini Navi backbone behind them. The yacht now works well as a whole and is open to light, air and the environment around her. In the end a refit that lasted almost a year took decades off, and managed to both capture the spirit of the boat and make room for the different lifestyles of the Cs.

This article first appeared in the May 2019 edition of BOAT International.

SPIRIT OF THE C'S