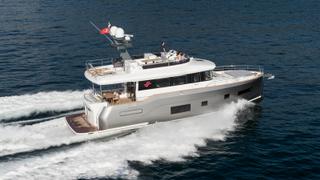 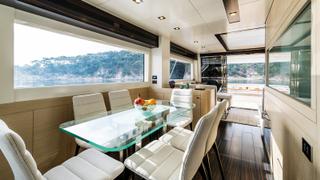 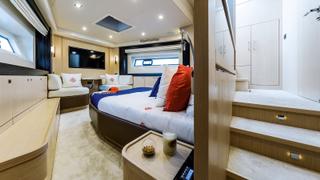 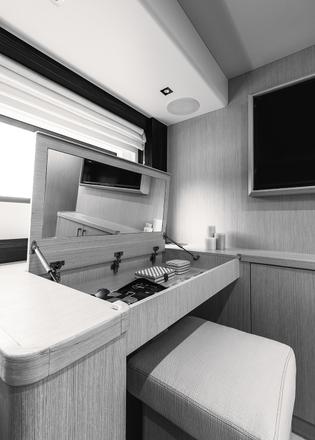 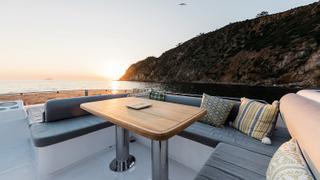 Home Comforts: On board the Sirena Yachts 18.6 metre weekender

Moored in the peaceful beauty of Yalova on the eastern coast of the Sea of Marmara, the Sirena 58 looks every inch the long-range cruiser. Designed for independent exploration, the 18.6 metre yacht emits a silent siren call for adventure at sea. But, crucially, it has to be a comfortable adventure, says İpek Kıraç, Sirena Yachts' CEO.

“Once you are on a yacht, after a certain amount of time passes, you start missing the comfort of your home. We wanted to create yachts that would make you miss your home less and that’s what defined the brand. Sirena Yachts delivers superyacht solutions, comfort and quality to smaller size vessels.” It’s hard to argue when touring the 58, the newest – and smallest – member of the Sirena fleet. The light, bright interior packs in plenty of volume for her length and there is no shortage of deck space and lounging options.

The philosophy is paying dividends on the sales side. Sirena has sold 21 58s in less than a year since the model’s launch. The yacht’s bigger sister, the 64, has sold similar numbers and the success has convinced the yard to launch an 85 footer. “The 58 has turned out to be a great alternative for those who want to have the comfort of a larger yacht, but the joy of driving her by themselves,” says Erhan Derin, project manager of the yard’s motor yacht division. “Today more yacht owners are asking for boats that allow them to travel long distances and enjoy their privacy in a smaller but relaxing area. The Sirena 58 can be considered a reasonable trawler, however she differentiates herself with her speed and spacious areas.”

With a beam of 5.35 metres, the 58 is available in two- or three-cabin layouts, with the former making most sense for superyacht owners looking for an independent weekender. In this arrangement, the forward cabin gains a private staircase, giving its occupants immediate access to the foredeck. “This is a lovely practical feature that adds to the onboard experience for the owner, but took some thoughtful design to achieve,” says well known superyacht designer Tommaso Spadolini, who styled the interior. “We built reinforcements into the structure behind the bed and covered them with oak panelling. Basically, the owner can walk straight from his cabin, take seven steps and emerge onto the foredeck without having to pass through the main saloon, as is usually the case.”

With a beam of 5.35 metres, the 58 is available in two- or three-cabin layouts

It was this feature, as well as the opportunity to operate single-handedly, that convinced shipyard owner Kıraç to buy a Sirena 58 for herself. “By using the [forward cabin] as my master cabin, I have a private access to the front deck, which gives me a superyacht kind of privacy and comfort.” Another well known superyacht name was brought in to handle the naval architecture – Germán Frers. He describes the 58 as “a mini explorer yacht”, but this isn’t some 12 knot plodder.

The yacht’s standard 650hp Caterpillar engines give her a punchy top speed of 30 knots, with limited noise and vibration. That blade-like bow, meanwhile, had proven itself in some nasty conditions, according to Tarık Şanlı, after-sales manager of Sirena Yachts, who recalls one trip to Genoa in three metre seas: “Although the sea level was around the freeboard, we definitely didn’t compromise on comfort.” There’s that word again. If there’s another that keeps recurring when talking to the people behind the 58 and owners of the model, it’s “home”. One owner says: “The flybridge is really impressive, internal volumes are very spacious while the cabin layouts make me feel at home.”

The 58 and 64 are signals of intent for the ambitious young yard. Next comes the 85, but Kıraç reveals that her plans don’t stop there. “We are going to see bigger ranges in Sirena Yachts, as well as other new models within the existing line,” she says. “As the 85 project proceeds, we will be both working on a superyacht range and the new Sirena Yachts range simultaneously.” That’s quite a statement from a shipyard no one had heard of until a few years ago, but like its boats, this is one yard not scared of a little adventure.

Downsizing: Superyacht owners on the joys of small boats