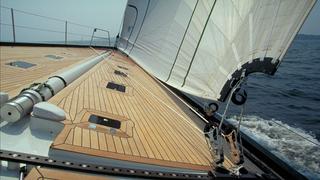 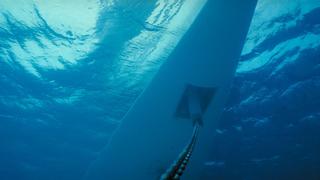 When I devised Wallygator II, the Wally 105, I was dreaming not only of cruising around the world with my young family but also competing in races along the way. The boat therefore had to be capable of very fast ocean crossings and be stable and comfortable for long, bluewater cruising. In fact, these are the pillars of the Wally concept, exemplified in our slogan: Fast and Easy.

Every kind of new idea, new material and new technology was explored and applied on Wallygator II: carbon fibre, titanium, electronics to control 360 functions on board, ultra-light honeycomb interior joinery, retractable propellers, fully hydraulic manoeuvres… It is still rare to find so much technology in one boat. I was willing to achieve the best quality at any cost, and supervised every detail of the construction.

Wallygator II allowed many suppliers to develop revolutionary products which are still state of the art in our industry. For example, carbon cloth, developed by North Sails with the support of Luca Bassani, allows all the sailing superyachts to proceed quickly and safely.

At the heart of the Wally 105 is a diesel/hydraulic propulsion system, made by Cariboni of Italy, that replaces the conventional main engine and propeller, shaft and strut with twin retractable hydraulic four-bladed thrusters, one amidships and one in the bow. Both units can rotate through 135 degrees and have forward and aft thrust to allow the helmsman, with joysticks, to effectively have 360 degree control. The thrusters descend in just 15 seconds, and then the yacht can literally move sideways out of the dock. With both units engaged, forward movement at up to 12 knots is possible.

Sailors tell me that Wallygator II (now Nariida) is still the best-looking boat built by Wally, but I remember that when she was launched those same sailors were very critical of her! She took me across the Atlantic for the first time in such a powerful and safe way that I didn’t want the voyage to end, and we competed in fantastic races boosted by the Sardinian Mistral, several times hitting more than 20 knots and losing sight of our rivals – behind us! We also sailed long and unforgettable cruises with my family and lots of friends – all my children would be very happy if I could buy her back.

Many people helped me to make my dream come true, among them Luca Brenta, Don Watson, Tom Whidden and Gianni Cariboni – and my wonderful crew, who are still sailing with me on the big 118 WallyPower. When I saw Mari-Cha IV sailing a few years ago, I had the distinct feeling of seeing a true daughter of Wallygator II, developed using newer technologies but following the same concepts.

The two years spent developing and building this delightful boat were a unique period of my life. I was in an ‘inspired mood’, like an artist in a trance while creating his life’s masterpiece. I don’t know if I will ever be able to repeat such a magical time but I wish everybody could go through the same experience.