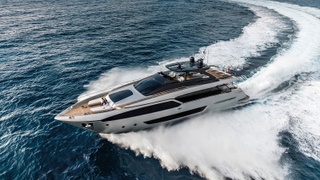 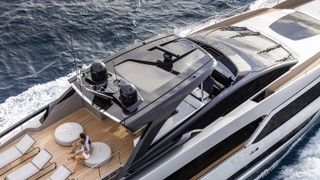 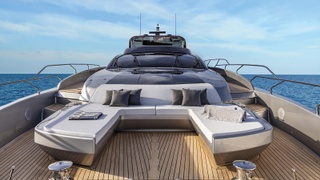 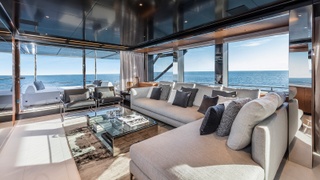 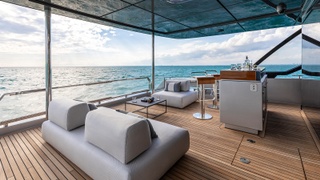 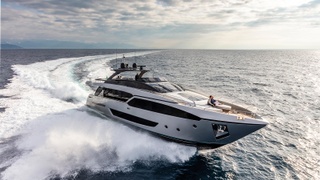 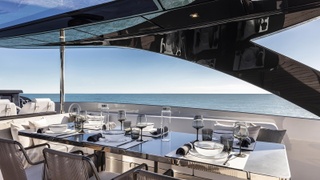 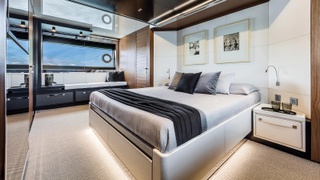 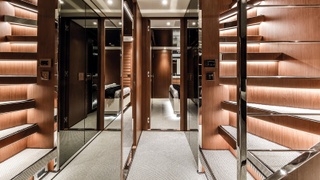 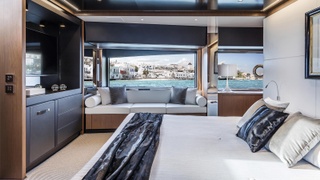 The Argo may be the smallest of Riva’s new-generation flybridge models, but it is perfectly formed, learns Cecile Gauert

To fully appreciate the new Riva 90' Argo, and really any Riva, you have to take a bird’s-eye view. That’s how its designer, Mauro Micheli, sees it, and the helicopter perspective is the first drawing he presented to the shipyard. If you were to look at the new Riva from that angle, one feature you’d notice is the asymmetric design of the large glass panel inserted into the hardtop. According to Stefano de Vivo, chief commercial officer of the Ferretti Group, this single piece is also “quite expensive”.

“It’s like an abstract design,” explains Sergio Beretta, co-founder with Micheli of Officina Italiana Design. “Our main passion is contemporary art, and so we wanted to give something special, something more contemporary for this boat, and we found this asymmetric cut [glass],” he says. It’s set inside the hardtop that shelters a good section of the 46-square-metre ybridge, one of the great assets of this elegant sub-30-metre yacht. This asymmetric top has already been seen on the Argo’s larger sistership, the 33.5-metre Riva Dolcevita.

The Argo – a name borrowed from the Greek legend of the Argonauts and the Golden Fleece – is the third and, at 28.5 metres, the smallest of Riva’s new-generation flybridge yachts, but as Micheli puts it, “it’s a strong design”.

“We think we found a very good balance for the spaces and for the style,” Beretta says. “The 90 came after the experience of the 100 [Corsaro] and 110 [Dolcevita]. It was a good thing on this project because all the positive feedback and features that we found for the two previous models we could express on this one. This experience was very helpful for us.” Many features are repeated successfully on a smaller scale – for instance, the saloon and its large windows. To create the effect the shipyard has nicknamed the “crystal palace”, which is to say a space surrounded by glass, proved an engineering challenge. The saloon’s aft section is almost all glass with no thick support or column to block the view. The idea is to provide an infinity view.

On the larger Dolcevita, the shipyard built a grid of steel to support the large amount of glass. On the Argo, the shipyard used a frame in carbon fibre instead, but the effect is the same, and quite impressive. It is, de Vivo says, “a spacious lounge covering almost 40 square metres open to the sea and reaches heights of over 2.1 metres”. It’s divided between a seating area and dining space finished with low-lying furniture. On one side is access to the galley and on the other is a corridor leading to the private owner’s suite, behind a solid door.

Riva introduced the first Argo, built at its La Spezia ship-yard, as a world premiere in Florida, first in Miami and later in Palm Beach. It features a bar right outside the saloon doors on the main deck. “I think in this area of the world [North America], people like to entertain a lot more with bars outside,” de Vivo says. It comes complete with two sofas and a coffee table by Paola Lenti.

On the European version, however, Officina Italiana Design has kept all the deck furnishings very low. A pair of sofas flank a high/low table that can be slid apart in two pieces, so that the view from inside is uninterrupted. Owners can choose either configuration, according to their preference.

One of the design challenges of the Argo was to make a shorter yacht with a full body forward look as sleek as possible. During the day, as the sunshine bounces off the surface, bands of dark glass make the boat appear slimmer. At night, with the interior lights on, the effect is strikingly different, and it becomes clear just how much glass there is. If lined up side by side, the panes would cover more than 80 square metres. With the light pouring out of the windows, the same boat appears more voluminous, simply because the brain interprets the surfaces in a different way.

Micheli’s approach to design is emotional and instinctive and he thinks about each design as a whole, a bit like a sculpture, and there aren’t any bad angles. From the bow of the Argo looking aft, the fleeting lines merely hint at the flybridge and its hardtop, which is painted black. He says the exterior, and especially “the surface”, is inspired by automotive design. From that angle, the yacht, which is capable of reaching 30 knots with the larger engine option (MTU 16V 2000 M96), also has the stance of a sports car.

Officina Italiana Design has been part of the Riva story for more than 25 years. One of the first larger boats the firm designed for Riva was the 13-metre Rivarama 44, a rakish dayboat with one cabin. At the time, the builder’s technical department did not quite get it, as Beretta recalls. They thought it crazy to make a 13-metre yacht with just one cabin, he says, “And then they sold 130 in 10 years.”

That’s a pretty solid argument that has helped the design firm keep a large amount of creative freedom in its collaboration with Riva. “We have to thank the shipyard. They always try to produce what we design; we are very lucky with that. Some designers we know would like to be more creative, but they are constrained by what the yard is able and willing to produce,” Beretta says. Their design philosophy pervades the Riva DNA.

“Good design must be long-lasting, and it is a sign of respect for our work but also for the customers. They don’t deserve a boat that is out of fashion in two years. That’s why we are classical, though with a contemporary touch because you cannot live in the past.”

This philosophy carries into the interior. Officina Italiana Design works closely with the yard’s interior design department on everything from materials to colours and furniture, and they create interiors that transcend fashions.

Although they have not got around to designing furniture yet, they have a number of go-to favourites, all Italian brands. Minotti is one, but they like to mix it up. Another preferred furniture maker is a small company near their home in Bergamo called Acerbis.

“The basic materials we use for all Rivas – because we believe they are part of the history – are basically three: wood, leather and stainless steel,” Beretta says. Then new materials are thrown in because no one wants to be stuck in the past. On the Argo, stainless steel is used extensively in strategic ways that expand space visually and reflect the light. Dark lacquer is on the ceilings and English walnut on bulkheads.

“Because this boat is so light, we decided on a darker interior, which provides comfort,” Micheli says. White leather with stitched borders and Calacatta marble in the bathroom counterbalance the darker hues.

Considered a gateway to the superyacht-size yachts Riva now builds, the Argo has two crew cabins and a small mess that is connected to the galley on the main deck. Despite similarities, it would be a mistake to see the Argo as a shrunken version of the Dolcevita or Corsaro. The hull is a new design developed for this project and the Argo has been thought out through and through.

The shipyard decided on just three guest cabins. An especially large suite is amidships, which compares favourably with the 30-square-metre suite on the main deck. “Some owners prefer sleeping up top and some prefer being down below. So, we’re giving them the best of two worlds with what amounts to two master cabins, plus another two en-suite cabins,” de Vivo says.

The Argo also has a great flow. A very nice feature is how interconnected the spaces are. For instance, it is possible to walk directly from the flybridge to the bow area, which is simply organised with a C-shaped couch. “In [the US], people use this area a lot more,” de Vivo observes.

The flybridge is one of the yacht’s great assets. The bar top is automated and opens at a touch of a button to reveal an outdoor galley just across from the dining table. But the pièce de résistance may be the superb seats facing the console. Set atop a sculptural pedestal with a stainless-steel finish, they provide fantastic views over the bow and the sensation of flight at higher speed. So yes, there are compelling reasons to look at the Argo from the top or, really, any angle.

All images courtesy of Alberto Cocchi.