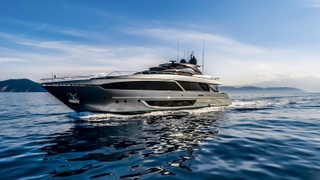 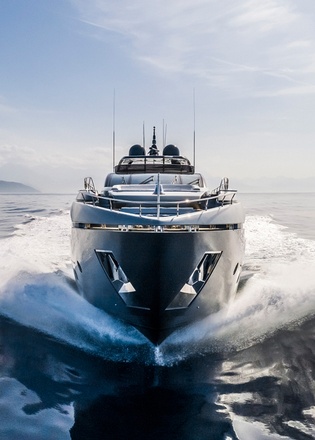 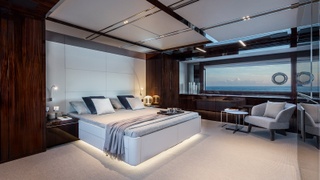 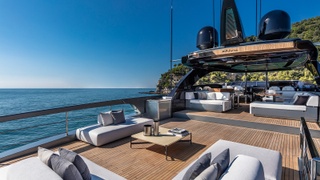 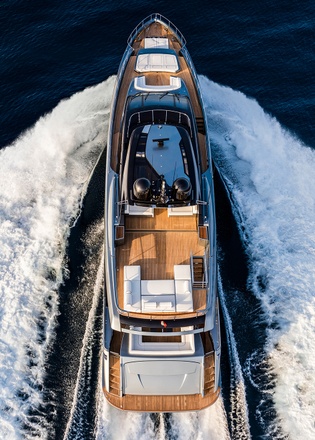 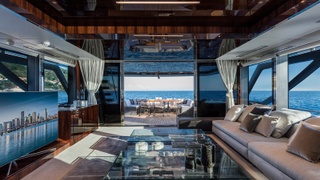 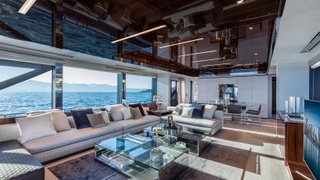 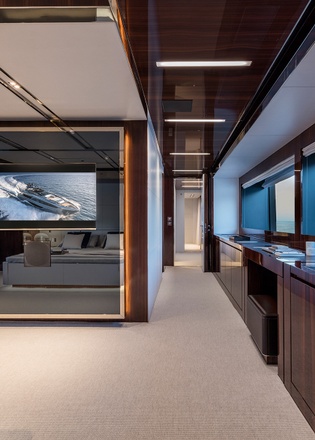 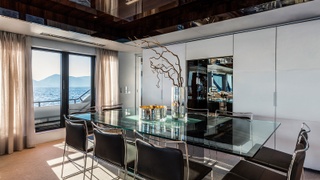 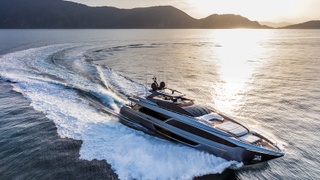 Reinventing iconic: On board the 33.5m Riva 110' Dolcevita

Iconic style on a larger scale – Riva brings the feel of its famous runabouts to its 33.5-metre superyacht. Risa Merl learns how...

Since Brigitte Bardot was first spotted on board her Riva Super Florida Nounours off Saint-Tropez in the 1960s, the Riva brand has been synonymous with glamour, speed and classic good looks. It’s a heady combination that has earned the Italian builder a loyal fan base. Vintage Rivas are so legendary, in fact, they are some of the few yachts to increase in value as they age – the last wooden-hulled Aquarama to be built was sold at auction for $975,000 (£763,000) nearly 40 years after its launch.

The question was, as Riva moved into building fibreglass motor yachts in the 2000s, could the style, grace – and success – of a classic Riva ever be replicated on a larger scale? The builder’s latest fibreglass flagship, the 33.5 metre 110' Dolcevita, is specifically designed in the hopes of answering this query with a resounding yes.

“Bringing the iconic Riva styling into a larger boat was the target since the beginning of the project,” says Giordano Pellacani, head of sales and marketing at Riva, under the Ferretti Group umbrella. “If you look at the previous [large] Riva models, they were not exactly in that style.” The Dolcevita is a step up from the 29.9 metre Corsaro model that, while good-looking in its own right, did not carry forward the trademark Riva styling to the same extent that the Dolcevita aims to.

Riva embarked on a thorough review and development process, spending twice as long in the planning phase as they usually would on a project. “We interviewed many customers and found they wanted something that reminded them of smaller Rivas, with attention poured into our classic details – but on a megayacht,” Pellacani says, referring to Riva’s trademark use of mahogany wood, gleaming stainless steel and rich leathers. These features loom large on the Dolcevita, but with a modern twist. The team at Officina Italiana Design – the exclusive designer of Rivas since 1994 – was inspired by classic Rivas but was careful not to create a retro boat. The new Dolcevita had to perfectly balance modern styling with the timeless luxury that clients associate with Riva.

“Riva design centres around clean, spare lines, resulting in elegant boats,” says the CEO of Officina Italiana Design, Sergio Beretta. “The 110' Dolcevita is in the spirit of Riva tradition. The lines are clean and elegant, including throughout the model’s interior, where the style was personalised to suit the owner’s requirements.” With an integrated flybridge and a silver-grey paint job, the 110' Dolcevita has a sporty look. Gaze closer, however, and you’ll notice sinuous exterior lines that are detailed yet well-balanced, providing just enough handsome Riva styling while meeting the design team’s maxim that less is more. The black windows on the main deck form a continuous band, a feature that defines the exterior but is best appreciated from inside, where such glazing allows for 270-degree views.

The 110' Dolcevita's Italian builder is known for its attention to detail, which can be seen inside and out

“The saloon has unusual windows that run for most of the yacht’s profile, creating a sense of visual space and breadth aft because there is no structure,” says Mauro Micheli, chief designer of Officina Italiana. “From an engineering point of view, it was an interesting challenge. The idea was, how can we give something to owners that no one else has in this size range? You might see windows like this on a much larger yacht, like Vava 2 or Musashi. But how could we create this atmosphere on a smaller yacht? When we told the engineers what we wanted, they said, ‘You’re crazy’.”

To conjure up an open feeling reminiscent of a Riva runabout inside a superyacht was no small feat. Riva’s engineers devised a “spider structure” that allowed for huge windows supported by minuscule mullions. Four transversal and four longitudinal pieces of stainless steel combine to make a frame that is attached to the hull, supporting the stress of the yacht and connecting the hull and superstructure. The result is what Pellacani calls “the crystal palace” – a light-filled interior with seamless windows, remarkable indoor-outdoor continuity and panoramic views.

The abundance of glass lets in massive amounts of light to the wood-filled interior, illuminating the high-gloss joinery. “We used a lot of wood, as per Riva tradition, but in this case we went for rosewood,” Micheli says. Rosewood is similar to mahogany, but has darker veining and a dense grain that makes it very durable, and the wood takes a polish well.

For 70 per cent of its boats built these days, Riva uses pre-engineered woods to avoid mistakes, knots or misalignments showing in the veneer. “For Dolcevita, we opted to use real wood and keep the defects in, we wanted to see them, then apply our love of detailing,” Pellacani says. “We use more material this way – because sometimes you need quite a big piece for the furniture – which is reflected in the price point.”

The wood is refined by a team of in-house carpenters, the same craftsmen who work on smaller Rivas. Real wood, in all its natural glory and coated in gleaming varnish, certainly elicits the richness of a classic Riva launch. Deckheads are raised and the ceiling inset with shining rosewood, which gives a warmth to the spacious saloon.

To complement the light-reflecting rosewood, Officina Italiana Design brought in a pale-grey matte finish for the walls, which matches the light grey sofa. The interior has an understated elegance. Classic nautical materials combine with modern furnishings, such as the glass dining room table paired with leather and stainless-steel chairs. “There are a lot of details in leather and stainless steel that is the leitmotif for the interior and exterior,” Micheli says. The Riva branding is signalled in this and in more literal detailing, like the curved silver door handles imprinted with a Riva logo.

Nine Dolcevita hulls have been sold so far, heading off to locations ranging from Asia and the Middle East to Europe and the US. Half of those owners already have a smaller Riva and were looking for something to represent their love of the brand on a bigger scale. Hull five was the first to be seen by the public at the Monaco Yacht Show last September; the first four were delivered quickly and are being enjoyed by their owners. The new offering seems to appeal to both to Riva loyalists and to those looking for interesting amenities in a smaller package.

Feedback from one owner, who was looking for “big boat features but on a smaller scale” inspired Dolcevita’s unusual layout. While nearly every large yacht has the guest passageway to starboard and the crew to port, this Riva has the hallway leading to the full-beam owner’s cabin on the port side.

“We looked at our bigger 40- to 50-metre boats, and one of the things they must have is a dayhead near the main saloon, because owners throw dinner parties and do not want people in the guest cabins,” Pellacani says. “So we decided to have a very large dayhead on the left side of the main deck.” This dayhead is tucked under the port-side superstructure, set in a wide hallway just before the door to the owner’s suite.

Like the saloon, the master cabin is adorned with rosewood, grey soft goods and carpeting, and chocolate-brown leather chairs. Stainless-steel details also decorate the raised ceiling and are used for the wardrobe door handles. A smoked glass wall across from the bed adds depth and conceals a television. This recurrent theme of “Riva details”, reaffirming the yacht’s ties to its heritage, is carried through into the guest cabins as well. Four are found below, with the layout customisable. The owner of hull five opted for three VIPs and one cabin with twins and a Pullman berth. The rosewood details are even seen in the guest bathrooms.

Exterior spaces aim to recreate the feeling of flying jauntily around the harbour on a much smaller Riva. One such space is the foredeck lounge, accessed via a stairway leading forward from the starboard side. This sunpad-laden spot encapsulates the feeling of sprawling out on the back of an Aquarama, but with even more comfort. The foredeck lounge can also be customised to the owner’s wishes: this one has a rumble seat all the way forward, while another Dolcevita has a spa pool built on the bow.

The stylish helm stations bear the hallmarks of a classic Riva with more wood, leather and stainless details. A second helm is found on the sundeck, which also brings in carbon fibre detailing in the hardtop.“The Riva tradition also is for the exterior area to have a lot of details,” Pellacani says. This presented another challenge, as all the exterior elements of the yacht – from the ceiling of the flybridge to the inside of railings to the bases of (fixed) deck furniture – are painted to match the hull and perfectly polished and flawless to meet Riva’s standards. “It’s very expensive and very detailed, and to paint these items and protect them from scratching during construction is challenging.”

Intense attention to detail is what makes Riva stand out, for instance installing screws and then painting their heads in the same colour as the hull. So it makes sense when Beretta says, “We don’t think of 110' Dolcevita as a ‘superyacht’ – she is simply a yacht built in the spirit of iconic Rivas.”

Iconic is an overused word. Many claim it, yet few are truly deserving. The undoubtedly iconic Riva runabouts like Ms Bardot’s are an exception. Only time will tell if the 110' Dolcevita will reach such legendary heights. So far she is certainly making Riva fans sit up and take notice – and place their orders, too.

Metis: Inside the 63 Metre Benetti Superyacht