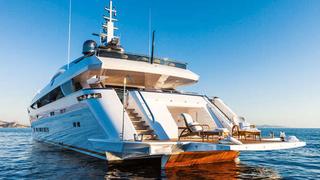 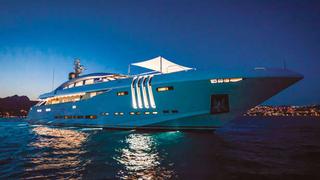 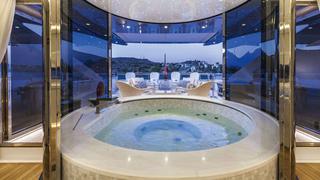 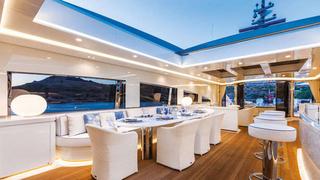 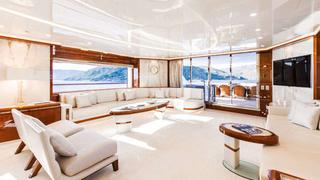 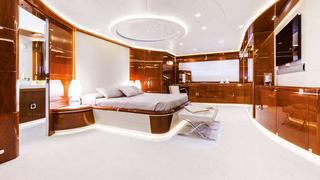 Ketos 48m - Rossinavi's first production yacht is anything but standard

The Ketos range is a new step for Italy's Rossi Navi, which has to date only built custom yachts designed by their clients architects. After the successful launches of Aslec IV and 2 Ladies in 2012, the seventh yacht to be launched by Rossinavi is the first of a new production-yacht range called Ketos, created by the yard in collaboration with naval architect Enrico Gobbi and Team 4 Design Venice.

The Ketos story began a few years ago when Gobbi and the Rossi family met to discuss the construction of an aluminium 40-metre planing yacht. From this first experience came the 2009 collaboration with Team 4 Design, and now we have now developed the Ketos range together, says Claudia Rossi, Rossinavi's head of marketing. The project immediately appealed to us, with its original windows and sleek, sporty lines. We offered it to the market, and the owner of the 40-metre planing yacht was fascinated by it.

The name Ketos has a rich maritime history – in Greek mythology ‘ketos’ were large, powerful and aggressive fish or whales, such as the one that swallowed Jonah in the biblical tale. And their Latin name – cetus – was given to ships that were capable of tackling any weather condition.

‘We wanted the Ketos line to include stylistic markers that would highlight the advanced, powerful and dynamic lines, without being aggressive,’ explains Gobbi. ‘We also wanted to ensure the markers and lines would maintain a sleek profile that would express vitality and show a strong personality; lines recognisable from the first glance.’

The first Ketos promoted by the yard and the designer was the 43m, but the first client to be enchanted by the Ketos, the owner of a 40-metre planing yacht, wanted to add another five metres, and the Ketos 48m was born.

With the Ketos 48m, Gobbi and Team 4 Design have created a striking and original composition of openings and windows  in particular the four vertical strips in the wide bow area that hosts the owners suite. From the outside the vertical strips look like large air intakes, but they are signs related to force, says Gobbi. To these we added features to enhance the aerodynamic lines: horizontal windows in the hull that are long and slender, and aligned parallel to the waterline, which illuminate the guest cabins on the lower deck. These elongate the hull, dont break the continuity, and add light to the guest cabins while also offering a view.

Ketos 48m is defined as a two-and-a-half deck due to its low lines. It is practically a sporty open yacht, but in reality is a comfortable tri-deck. One of its best features is the upper deck, rarely seen in this type of yacht or in these dimensions. This deck hosts the bridge and helm to the bow, and features a large dining area, lounge area, bar, large area with sunbeds, and a circular spa pool in the middle of the glass wall that separates the interior from the aft upper deck.

A two-part circular door slides around the spa pool, allowing it to become part of the aft deck or the interior; leaving the door open creates a continuous space along the length of the deck.

We had already studied this solution for the owner of the 40-metre planing yacht, says Gobbi, and he found it so satisfactory that he also wanted it aboard the Ketos 48  but bigger.

Thanks to the technical resources of the Rossi Navi yard, we were able to create an electrical control to open the upper decks four windows, just like in a car, and to make part of the roof slide back. This is a considerable feat of engineering, as the windows are more than two metres long and made of very thick, heavy glass.

To highlight the internal/external relationship and offer continuity we made all of the deck, inside and outside, from teak. Ketos 48m is not an open-decked yacht, but on this level, when the circular doors and the roof are opened and the windows are down, it is just like being on board one.

While the owner admired the extremely modern exterior lines of the Ketos range, he wanted a traditional style for the interior, featuring materials he had used aboard his previous yachts. Gobbi, while respecting his wishes, steered him towards classic-modern  timeless solutions using materials chosen by the owner and his wife, who played a role in the choice of details and colour.

We started with high-gloss cherry [wood], as this was the first and non-negotiable request, said Gobbi. To match an interior with classic accents to such modern external lines we used a scheme combining cherry with large, light surfaces, creating a contrast in which the wood became the marker of the horizontal and vertical planes  the framework, profile and planking  but was not used for large and heavy panels. We also agreed on the application of highly decorative stones, such as onyx, which were also backlit, and convinced the owner to use mainly straight lines with a few curves in the saloon, so as not to create too violent a contrast between the exterior and interior.

The owners suite is situated in the bow and benefits from the tremendous light and spectacular views afforded by those vertical windows. On the main deck are the dining area, galley, main saloon and lobby. A spiral staircase in the lobby is decorated with an extraordinary lamp consisting of a series of steel circles studded with Swarovski crystals, which diffuse the LED light hidden behind them to create a stellar effect.

Light is a fundamental element of this project, says Gobbi. We have always opted for indirect light as it allows extraordinary effects to be created when it is dimmed. Seen by night, Ketos 48m is a fountain, in which light cascades from all the openings towards the sea.

On the lower deck is a large full-beam VIP suite and two guest cabins, one with twin beds, and the other with a king-sized bed.

The free-standing furniture is split between pieces made by artisans working to plans by Team 4 Design, and production furniture with personalised finishes and upholstery, Morati continues. Another characteristic of the yacht are its bars. There are three: one on the upper deck, one in the main decks sun deck and another in the saloon. You will not die of thirst aboard!

In the engine room are two MTU 16V 2000 M94 engines of 2,600hp, concludes Rossi, chosen for cruising in maximum comfort rather than moving at high speeds  17.5 knots is the boats top speed. The Humphree interceptor was used to guarantee the best trim.

Ketos 48m is classified as RINA Pleasure Craft, as the owner is a passionate navigator who wants to use the yacht personally and has already clocked thousands of miles. She is also MCA compliant, ensuring that when her owner would like to sell, the new owner will have no problems chartering the yacht if they wish. And there is no doubt that she would be snapped up quickly.

Bel Abri - the semi-custom yacht with its own style