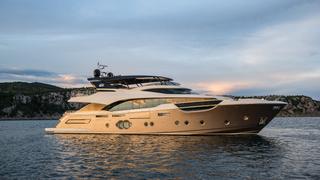 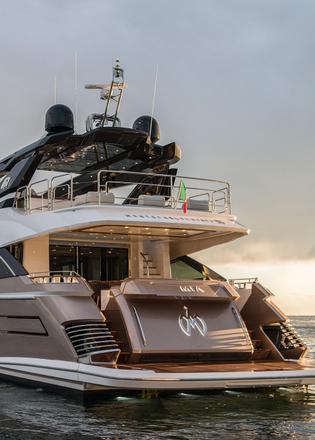 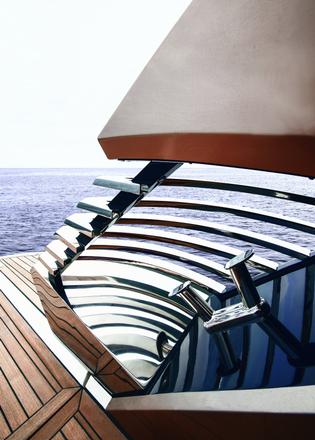 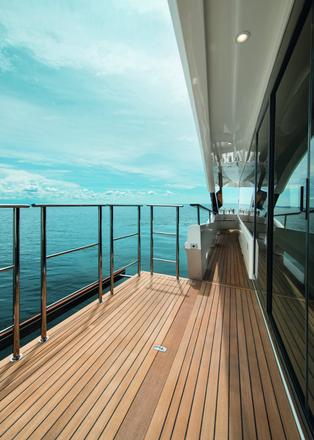 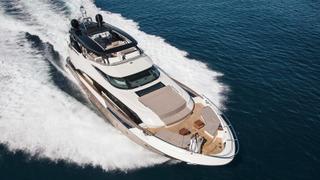 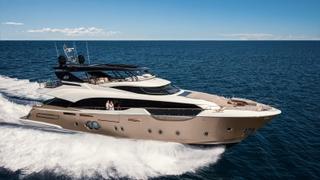 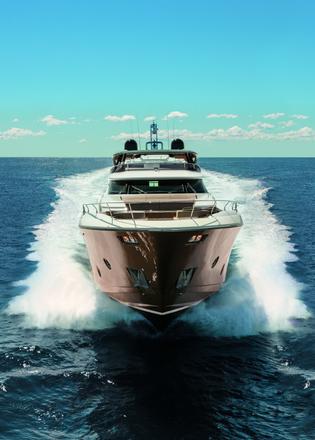 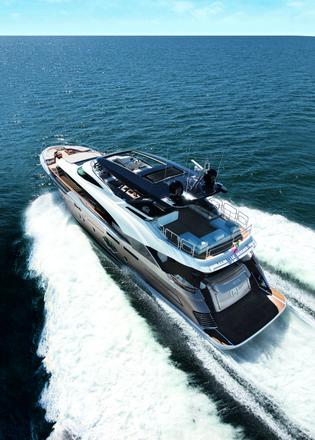 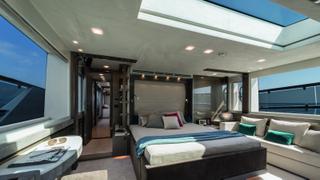 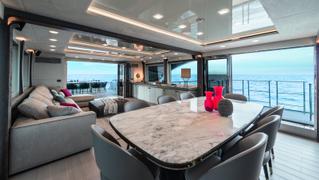 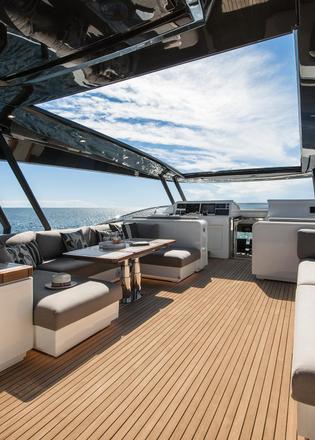 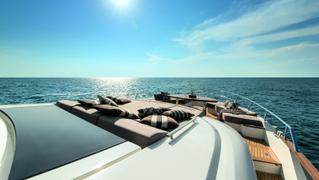 Stroll along any of the Mediterranean’s glitzier docks and you’ll see two types of production motor yacht. In one, distinctive sweeps of architecture mark out the work of a particular builder – a yard that has a “look”. That’s a Sunseeker, or a Princess perhaps. Then there’s the other type, blurring into a wall of tombstone white sterns, whose lines don’t even whisper a brand identity. One type is doing better commercially – guess which.

When Monte Carlo Yachts started its engines in Monfalcone, north-east of Venice, in 2010, it brought in Nuvolari Lenard to design its nascent line of boats and gave the studio artistic free rein. But the yard stipulated that the yachts must have a “look”.

“They had an idea where they wanted to be placed in the market,” says designer Dan Lenard. “It was a project [to create] the brand, not design a boat. They told us what the boat should do as a brand, so we targeted the boats to the performance and to the position on the market. We helped them to create a brand around the product.”

The first MCY96, Mia, made her debut at a glamorous party in Venice last summer and slots nicely into the fruitful line. “There was an important gap in the range,” says Federico Peruccio, MCY’s marketing manager. “The 96 so far has been an amazing success already on paper – this is, of course, hull No 1, but the first three are sold. [The first to a European], the second in the States, the third will be in Asia.” In other words, a marketing executive’s dream spread – cracking three major markets.

Mia’s lines speak to her family heritage. “The yachts look like they can go in the sea – they are marine looking boats,” says Lenard. That translates to a powerful bow. “Most of the competitors’ boats’ bows are lower than they should be for the displacement and the speed that they are doing. Not ours. Ours have that sturdiness of an American sportfisher, made for high speed and open seas.”

The stern, in contrast, Lenard describes as distinctly “yachty”, with glass either side of the aft decks creating a “cocoonish” feeling. Between the two, the styling is all organic curves and flare, punctuated with a pair of signature overlapping portlights amidships. It’s distinctive and unashamedly glamorous – not least because of Mia's bronze hull.

Inside the MCY96, the yard offers clients three layout options. Mia’s owner chose the standard version, with four lower deck guest cabins, but clients can choose from two alternatives, both with a full beam VIP aft, one with two twins, the other with a twin and a double. In any case, as Lenard puts it, “it’s not made of small spaces, it’s not a necklace of rooms.”

These options, in combination with bespoke decoration, make the boats feel truly individual inside – so much so that three 105s (Serendipity, Dolce Vita and Botti) were under consideration in the same category for the 2017 World Superyacht Awards. Botti won.

With the spaces planned, Mia’s owner turned to Nuvolari Lenard for the décor. “From the beginning we decided to give the interiors a new spirit,” says Valentina Zannier, interior designer at the company.

A light, modern design was called for, “so you get immediately the feeling of a larger boat because everything is bright”, she says. This means pale lacquers, metals and metallic timbers. In the saloon the mix feels natural and relaxing – pale maple floors, “white mirror” and leather overheads, undulating cabinets fronted with metallic oak, a massive low-slung sofa by Minotti, a marble table with smart leather details by Visionnaire next to a large port balcony. The whole space is well lit by good-sized windows.

Like Lenard’s “marine” exterior, the designers were keen to keep a maritime feeling inside. “We always try to emphasise the structure of the boat, with mullions and sometimes beams in dark materials, so that when you enter the boat you really understand it is not just a nice room, you are in a boat. So the architectural elements, they are visible.” On Mia, these elements are picked out in dark maple.

In a similarly stylish muted colour scheme, the owner’s cabin forward on the main deck features an en suite and walk-in wardrobe forward, while the twins down below have Pullmans – and all have opening portholes for a fresh breeze.

The crew have it pretty good, too. The engine room, with two 2,200hp MTUs (a 1,900hp version is also available), is designed, Peruccio says, “to guarantee maximum space in between and around the engines to access all areas”. The tender garage is suitable for a 4.5 metre Williams Turbojet 445 – good going for a 29 metre yacht. Crew accommodation and the galley forward on the lower deck take up a good chunk of space and offer a decent living and working environment.

Up on the flybridge deck is another set of controls. Standing here in the breeze as Mia climbs smoothly towards her 27 knot top speed, pelting out of Venice’s lagoon towards the open sea, this feels like the best spot aboard. So it makes sense that the yard and designers have made the most of this deck, with a long bank of built-in sofas to starboard and an expandable table to port with more sofa seating, all shaded by a hardtop with a huge retractable section, more sofas and sunpads aft, plus a bar.

Peruccio reels off its facilities: “A professional grill with a big stainless steel cover – a typical American version even though hull No 1 will stay in the Med – a double door fridge, ice maker, wine canteen, sink...”

But this deck has competition from an unlikely quarter. MCY's foredeck lounges have become as much of a brand identifier as any stylistic flourish of the superstructure. On a 29 metre yacht that’s packing a lot in, it is sensible to make more of this traditionally unloved space. Mia’s foredeck lounge is a compact wonder, with tiered sunpads, stylish and adjustable tables and comfortable seating.

Peruccio likens it to “an exquisitely private living room. It’s a real lounge which can be customised and adapts to different uses during the whole day on board. Portuguese bridges such as these are normally reserved for megayachts.”

But this kind of big boat attention to detail is notable throughout Mia, down to the positioning of spotlights by a mirror in the main deckhead to give a pretty reflection. It is testament partly to Nuvolari Lenard’s experience in the realm of the world's largest superyachts, and also to MCY’s painstaking attitude.

That, perhaps, is a brand identifier you can’t see from the dock, but the one that’s likely to keep owners coming back.

Q&A: On board with Rafael Nadal, tennis ace and owner of Beethoven