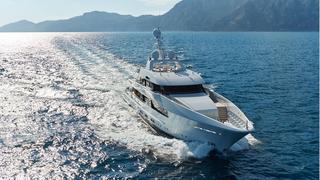 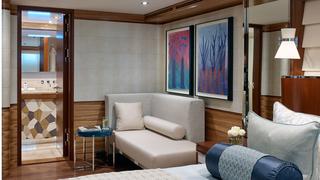 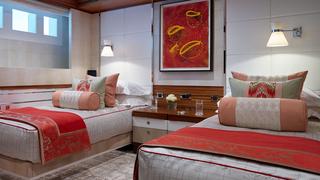 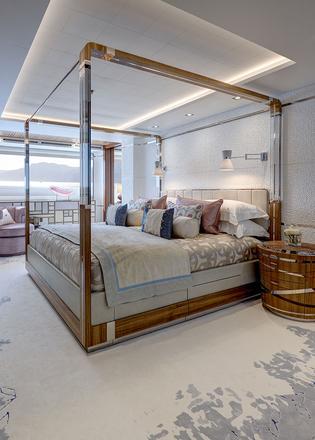 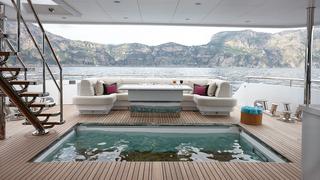 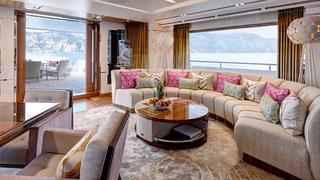 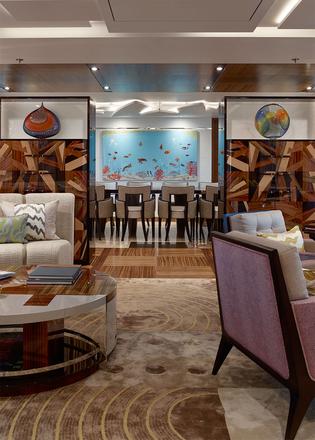 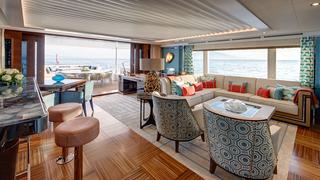 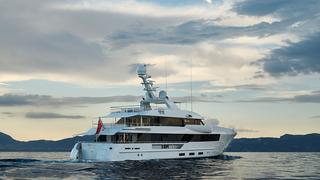 The owners who created Moon Sand very nearly didn’t. They almost bought 43 metre GO, built by Feadship in 2010, on the brokerage market. Then they changed their minds, disappointing their broker until they said “no, we want to build a new yacht”. And so began the 30-month adventure of creating the new 44 metre family yacht they ultimately wanted. “They really had a great time building her,” says Bas Nederpelt, Feadship’s commercial director. That’s evident at first sight. The décor of _Moon Sand _is lively, with happy colours that glow in the sunlight and bespoke furnishings.

Not a middle-of-the-road interior, this is highly personal, with a collection of glass pieces, rich fabrics and stunning stones. The furniture, most of it custom-designed and built, hails from superyacht favourites Silverlining and Linley in the UK and from Pollaro in the US.

Moon Sand is an interesting blend of modern and classic, part beach house and part villa, with materials cherry-picked from diverse sources, from a marble shop in Italy to a warehouse of rare veneers in New Jersey. On board for the adventure was the UK studio Bannenberg & Rowell Design, who the owners chose to create the sophisticated and cheerful ambience.

Although a custom build, Moon Sand draws some of her features from the SL39 series, which was also created by De Voogt Naval Architects. Early in the new millennium, Feadship decided to develop two “custom” series to respond to the demands of younger owners unwilling to wait for a custom yacht but desiring the same quality. The F45 Vantage series was born first, in 2005, and then came the SL39 series; GO was the third of the SL39s.

Features from these well-executed concepts are recalled in Moon Sand, also designed in-house by De Voogt. A size between 39 and 45 metres was just right for these owners.

Moon Sand started right in the middle, at 42 metres, and ended at just over 44 metres, because the owners wished to add a pool with a contraflow system on the main deck aft.

The 9,000-litre pool is six metres long and two metres wide. It fills up in only 20 minutes and has an adjustable floor height, which makes it deep enough for adults to swim in and safe enough to be a play pool for children. Such a large pool is uncommon on a yacht of this size, says De Voogt’s chief designer, Tanno Weeda. “It is used very frequently by the owner for a good swim in combination with the contraflow system. The pool doesn’t always need to be emptied. You just close the pool by lifting the teak deck floor of the pool to the deck [level] and you can use the aft deck without even noticing the pool is there.”

To enter the main saloon on Moon Sand, you step right over the raised pool, which is truly invisible, and through doors that part with a swoosh to reveal the luxurious and quiet universe within. The interior layout is traditional, with a comfortable saloon and a formal, full-beam dining room, connected to the galley on the port side via a large pantry. On the starboard side, a corridor leads to the owner’s suite – a study, large dressing area, cabin with – seldom seen on yachts – a four-poster bed, and his and hers bathrooms.

The guest suites are on the lower deck, accessed via a central staircase. Here, the layout differs from the standard four-cabin plan, with two of the three large cabins designed to combine into a VIP, with a seating area and two bathrooms. At this level, Nederpelt points out the sound of a generator – it is coming from the yacht docked next to Moon Sand. Thick silk Tai Ping carpets mute footsteps and the sound inside the cabins is that of luxurious silence. This relates to the yacht’s exhaust-cleaning system, says Nederpelt. With particles removed, clean exhaust from generators shoots to the top instead of off to the sides, offering the fringe benefit of eliminating one source of noise on the lower deck.

The carpets follow a general theme of texture and richness. The colours, materials and furniture are what set this interior apart. “We knew they wanted something colourful, bright and bold, using a lot of museum-quality pieces,” says Dickie Bannenberg.

As is usual in creating a custom interior, the designers travelled to the owners’ home to better understand their tastes. It was a mobile by Alexander Calder in their private collection that inspired the design of the dining room table, an amazing showpiece of marquetry, with Murano glass insets, built by Pollaro.

“It involved 10 species of veneer, as well as stainless steel, bronze and glass,” says Frank Pollaro. “All of these materials were masterfully woven by the Bannenberg & Rowell team into a spectacular piece of art furniture. The table required over 1,450 hours and was one of the most complex we have ever made. The bottom was as beautiful as the top.”

Serving as a backdrop is a colourful and playful underwater scene with fish and corals made of cracked eggshells. That piece took 1,000 hours to complete. Silverlining created the eye-catching twin cabinets holding china and accessories that frame the entrance to the dining saloon – the contrasted and modern marquetry make them works of art in their own right.

One of the dominant woods on Moon Sand is zebrano, an owner’s choice. It is found throughout as an accent and on some of the floors, along with a dark American walnut. Many other woods, including bleached wenge, oak, macassar ebony, maple and even petrified wood stone, contribute to the detailed interior. Unusually, many bulkheads are treated with a heavily textured off-white material. The surface is warmer to the touch than stone. “It’s specially milled Corian,” explains Bannenberg. “During many conversations and meetings, it became clear that the owners were not interested in conventional fabric panels. [This finish] was in response to the owner saying ‘what else can we do?’”

Much of the décor evolved over time through meetings and trips of discovery. A trip to Carrara changed the plans for the bathroom stones in the master suite. Moon Sand's owners, who went along, were awestruck by a slab of onyx in the shop; its colour nearly matched the pink Chanel jacket the wife wore. It was a fun coincidence that inspired them. They went for the pink onyx and chose a blue marble for his bathroom, which mirrors their predilection for coral and turquoise found elsewhere on board. Also in that treasure trove shop in Carrara was a large slab of polished blue agates that they chose as an ornate bar countertop (and conversation piece) in the upper saloon. Backlighting accentuates the effect.

The upper saloon exemplifies the boat’s spirit. It’s open and airy, with large windows, big doors and exceptional pieces of furniture and art. When it was designed in 2005, Feadship’s F45 Vantage series was a bit of an innovator in that respect, with large windows, wide-opening doors and teak flooring that continued from the aft deck outdoor area into the lounge. The SL39 reprised the idea. Since then, class rules and the technology available to build large glass panels have evolved tremendously. “The owners were keen to embrace future trends and requested large slabs of glass in the superstructure decks, as low, high and wide as possible. As well as looking fabulous from the outside, this arrangement offers superlative views,” says Weeda.

Owners and guests enjoy priceless vistas from just about anywhere inside Moon Sand, but best of all from the upper saloon. The full-beam area can be opened entirely to the elements. Doors open wide and the windows on port and starboard slide down into the structure. The raised ceiling in the middle also helps the space appear larger.

Mirroring the exterior styling, which is contemporary but not edgy, the upper saloon has a bit of a split personality – it is both relaxed and elegant. “Everything here, except for a couple of chairs, is custom,” says Bannenberg. The desk is from Linley’s Riviera collection. The desk’s top was inspired by teak decks on board yachts and is built in rosewood and inlaid sycamore. The shelves behind the desk are custom designed by Bannenberg & Rowell to replicate the desk’s features. The games table is by Pollaro. A stunning America’s Cup painting by a contemporary marine artist draws the eye to the bulkhead that separates this multifunctional room from the rest of the bridge deck.

Forwards is a small gym (with a good-sized window to offer a bit of distraction from the boredom of a treadmill run), the captain’s well-finished cabin and the bridge. The latter features zebrano wood and a comfortable banquette to cater for the guests, while the captain enjoys an efficient wheelhouse design putting all commands at his fingertips. Wing stations, attractive features in their own right within the modern exterior design of Moon Sand, help with manoeuvres.

Moon Sand is a full-displacement yacht with a range of about 3,600nm at 10 knots. Accordingly, she needs a diverse and capable crew. Aside from the captain’s cabin, there is room for nine crew in the lower-deck cabins, forward of the guest area, and engineer’s cabin adjacent to the engine room.

The pool location (with holding tank below it) meant that the designers had to forgo the more conventional garage. The sundeck is equipped with a sturdy crane able to lift and unload the 6.2 metre tender, which resides up top during passages. This solution goes hand in hand with the more traditional aspects of this yacht, including her “classic Feadship bow”. Yet Moon Sand also feels and looks contemporary, with her windows forming continuous visual lines on two levels and her attractive wing stations. All around she is a refreshing and bright addition to the superyacht fleet. Thank goodness these owners decided to strike out on their own.