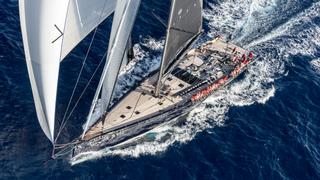 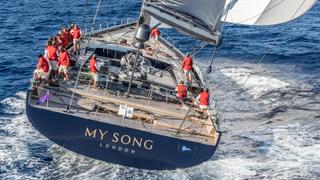 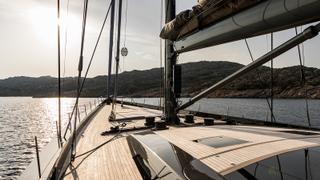 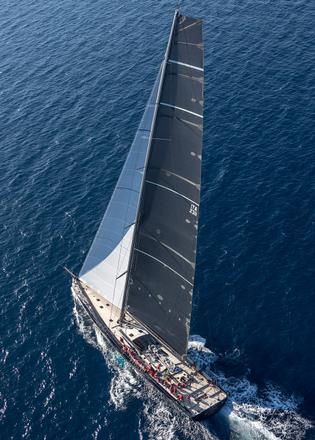 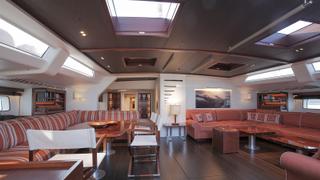 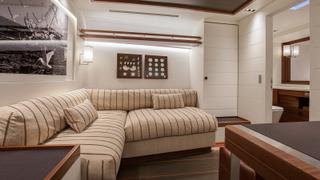 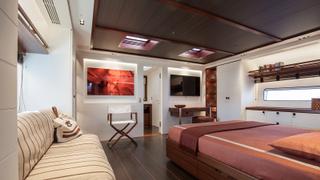 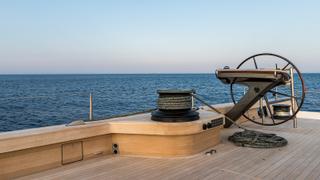 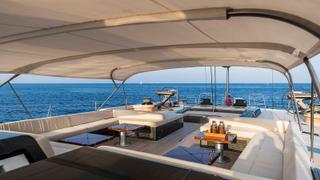 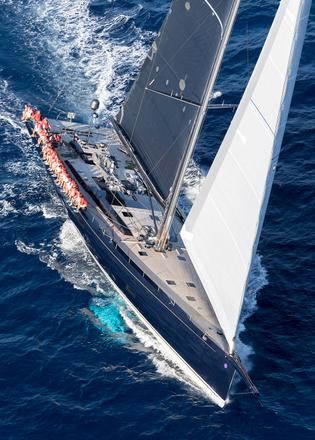 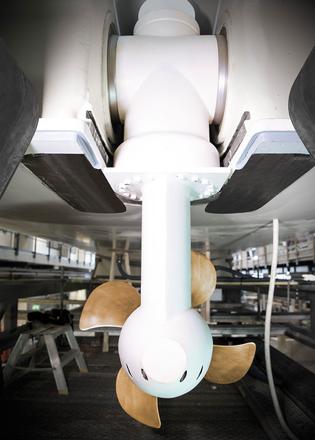 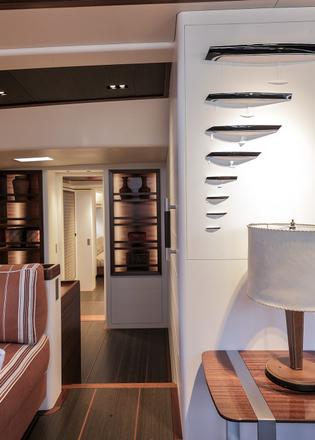 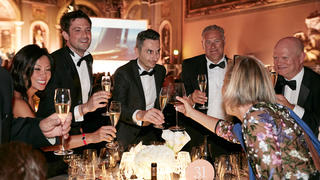 My Song: The Baltic sailing yacht that’s music to our ears

My Song’s designers, Mario Pedol and Massimo Gino, call this a “Dr Jekyll and Mr Hyde boat”. That’s almost true, except for one important distinction: Dr Jekyll spent a lifetime trying to repress his inner beast. Here, they’re trying to harness it.

But there’s no question that this new 40 metre from Baltic Yachts has a split personality — one half a respectable, comfortable cruising boat designed to whisk its owner, Pier Luigi Loro Piana, on long legs in the world’s finest cruising grounds, and the other a snarling, impatient start-line bully for whom coming second means you’re just first loser.

My Song is the most perfect example yet of the racer-cruiser species — a top predator. Or as Pedol puts it: “It’s our specialisation to blend these two things together, but we’ve never taken it to this extent. Never. The achievement was made possible by the extraordinary skills of the builder.”

My Song’s dark power, crystallised in carbon fibre, is well hidden as you step down the companionway into the beautifully fitted out interior. It’s tasteful luxury from bulkhead to bulkhead, with little obvious consideration for weight and therefore speed. Big, heavy glass panels in the deckhead usher light below and the long strips of glazing set in the topsides are equally effective.

The floors, bulkheads and ceilings are covered in what appears to be wood and there’s some big art on the walls. The sleight of hand has been expertly executed because My Song’s lightship displacement is just 105 tonnes, more than a third of which is keel ballast. That’s about half the displacement you’d expect of a similar sized cruising boat, yet nowhere on this all-carbon blade from Baltic Yachts do you feel like you’re missing out.

“The whole mantra of the build was ‘save weight’,” says Nauta Yachts’ project manager Martino Majno. The team Loro Piana assembled for his latest My Song yacht — Nauta Yachts for general concept and interior and exterior styling, Reichel/Pugh for the naval architecture and structural engineering, Baltic Yachts for construction and management from MCM — has done this in some ingenious ways.

The Nomex-cored bulkheads and furniture are nothing new, but the fully tapered keel, and linen composite floor, wall and ceiling panels are. Tricks such as carbon cable trays, heads and countertops have also been employed to keep My Song’s weight to a minimum.

So successful was this effort that the only fixtures of any significance to come out when crew are preparing My Song for a regatta are the saloon tables, for a maximum turnaround from cruising mode to racing of just two to three days.

“My vision for the latest My Song was for a yacht that would be extremely lightweight, fast and easy to handle: a real superyacht regatta contender,” says Loro Piana, adding that this had to balance with a “welcoming, comfortable and luxurious interior”.

My Song’s lifting keel, at 36.25 tonnes, comes from the world of grand prix racing yachts. It tapers from top to bottom, which improves hydrodynamic performance and reduces wetted surface, saving around two seconds a mile in straight-line speed, Majno says. A sliver, but one of many.

Perhaps most revolutionary, however, are the linen composite panels on the floors, walls and ceiling that look and feel like wood. As you might expect from the vice-president of a 200-year-old textile company, fabrics were a non-negotiable part of the My Song project, but to make them structural is new. Pedol remembers that up to 20 samples were produced before Baltic Yachts perfected the process of impregnating the linen with resin, and once it was they put it everywhere.

Loro Piana kept a close watch on the build throughout — demanding three 1:1 scale mock-ups of My Song’s interior be produced for him to configure the arrangement and decoration of his saloon and owner's cabin. “It was a huge effort,” says Majno. “I think we have enough materials and samples to put together a well-furnished museum!"

It’s not unusual for Baltic Yachts to produce scale prototypes of its interiors to show owners, but usually it’s just one. “This one was taken to the extreme,” says Henry Hawkins, Baltic Yachts’ CEO. “It’s amazing how much we changed between iterations.”

The effort has resulted in a very open interior. The full-beam saloon feels huge for a hull this size, and the big master cabin forward is equally impressive. A second, smaller bedroom sits just behind the master and together they can be closed off to form a private apartment.

There was one other scale mock-up produced in Italy — this time of the deck — and Loro Piana had his veteran race crew involved from the start in its arrangement. “It was important for the race crew guys to come and fine-tune the position of the Harken winches and all the deck gear,” says Majno.

“We did a proper evaluation, especially of the bulwark and the ratio between its height and width as well as the position of the stanchions so it was comfortable for people sitting there and leaning outboard when racing. All this was confirmed by the mock-up.”

From the water, My Song could almost be a flush deck yacht as the coachroof is almost entirely hidden by the 30cm high bulwarks. The long freeing port amidships, meanwhile, makes sure plenty of light makes it though the deckhouse windows. It’s all part of Loro Piana’s ambition to produce “an appealing, even sexy, exterior look”.

As you approach the ultra-wide stern, the deck steps down twice, which helps create a sunbathing spot out of the wind, but the best place to relax on board My Song is on one of the hydraulically operated chaise longues in the cockpit that push up out of a raised section of deck. This is the “social hub of the yacht”, according to Pedol.

A large bimini can be erected over this whole area to protect it from the sun when dining or reclining. The foredeck locker — used for sail storage when racing — also turns into somewhere you can sit and watch the night sky when My Song is in cruising mode.

Towering 56 metres above is the Southern Spars rig and latest North Sails 3Di pinhead cruising mainsail. A square-top main comes out for regattas, but even with the cruising set-up on our test day off La Spezia, My Song is sailing faster than the wind. Close-hauled in seven knots of breeze, boat speed is up around nine knots. Reaching, she hits 13 knots in eight knots of wind.

Reichel/Pugh started developing the hull in 2012 and considered nine candidate hulls before settling on My Song’s slippery naval architecture, which VPP studies show will get the yacht to a cruising speed of 16 knots and a top planing speed of just over 30 knots.

Helping her through the water is her perfectly faired hull, with only the long single rudder and tapered keel providing any significant resistance. This is down to another genuine novelty: My Song has no exposed shaft or supporting P-bracket but instead features a fully retractable propulsion system (RPS).

When sailing, the prop and the arm to which it is mounted fold forward into a box in the hull to leave a perfectly fair hull. When down, the shaft can rotate through 180 degrees, not only providing propulsion but also acting as a stern thruster.

Coming off the dock in La Spezia, My Song slips out sideways and then forward — all via joystick control. “Imagine how easy it will be to get into a crowded dock in Porto Cervo during the Maxis with this,” says Majno. The system was perfected on a pontoon in Denmark before being shipped for installation at Baltic Yachts’ yard in Finland. The propeller is also variable pitch, which means engine rpm is constant and speed is controlled by adjusting the pitch of the prop.

“So when you’re manoeuvring, the bow thruster can draw some heavy horsepower without affecting the boat’s speed, which solves a common problem,” explains Majno. “You keep the rpm constant and control the yacht’s speed — in forward or reverse — by just adjusting pitch.”

Keeping things as green as possible was important to this owner, whose linen walls and floors were also inspired by a desire to use as many natural materials as he could. The original hope was to power My Song with electrical propulsion, and maybe even a diesel-electric set-up, but studies proved that it would be too heavy.

Micro turbines were also investigated. These are hyper-efficient, high-rpm units that produce virtually no emissions, so they can exhaust straight into the engine room, but they require huge amounts of air and the intakes required would have stolen too much interior volume. After studying eight different power combinations, Massimo Gino at Nauta finally settled on an engine room layout with a traditional Caterpillar diesel, which, thanks to Baltic Yachts’ soundproofing, is barely audible.

The yard calls the sound levels “library quiet” owing to the fact that all of My Song’s cabins “float” on rubber shock absorbers to keep noise and vibration to a minimum. “We even looked at the profile of air-conditioning grilles identified as a potential source of noise,” Hawkins says.

“Teamwork combined with a skilled and experienced labour force was one of the most important aspects of the build and gave a key contribution to the final result, which received my full and complete satisfaction,” says the happy owner.

The various companies involved in this project really do seem to have chimed in the construction of My Song, which was recognised as the best boat in its class at the 2017 World Superyacht Awards in Florence.

Loro Piana hopes his new boat and its veteran race crew can gel as successfully. His team of America’s Cup, TP52 and Maxi72 sailors had almost 20 years to squeeze every fraction of a second out of the old My Song, a 25.6 metre Cookson sailing yacht, and are now working up the new 40 metre My Song before the summer regatta season.

The relentless training schedule meant there was only one possible day for a press sea trial, but even in the light airs off La Spezia, it is evident that this latest My Song is going to be a very fast boat when the beast is finally let out of its cage.

First published in the July 2017 edition of Boat International

Sybaris: How Perini Navi brought a yachting dream to life