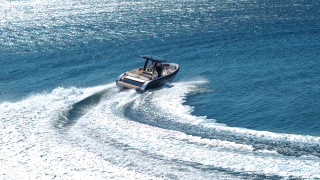 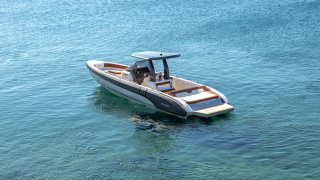 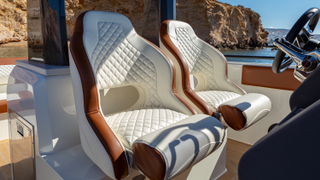 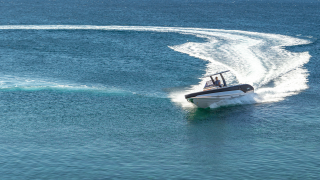 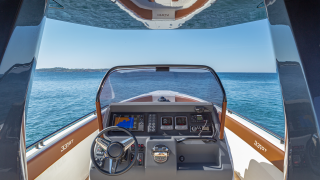 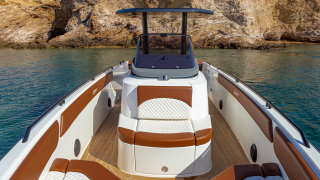 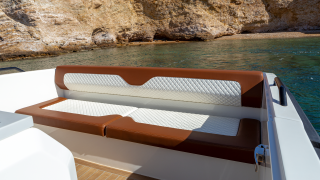 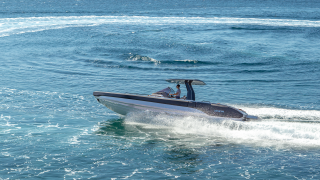 The Onda Tenders 331GT can reach a top speed of 55 knots. Risa Merl steps on board the 9.9 metre tender to test it out...

Monaco harbour is a sloshy mess. Not only is there a chop, but the wakes of a dozen tenders are colliding, creating a washing-machine effect. It might not be pleasant for guests being ferried out to the yachts at anchor, but these are exactly the right conditions to test the new Onda 331GT tender.

As we begin to jump an especially big wake, I brace myself for impact. But there is none. The deep-V, stepped hull of the 9.9-metre 331GT cuts perfectly through the sloppy conditions.

“We asked [our designers] for that. We wanted a boat that could go fast, but it also had to feel safe and comfortable,” says George Riginos, president of Onda Tenders, who developed this model with Swedish designers Ted and Ocke Mannerfelt of Mannerfelt Design Team, renowned for building racing powerboats with optimised stepped hulls. “They are known for fast boats,” says Riginos, “which is important because a lot of our customers in the Med – like Greece, Turkey, Italy – really want a fast boat.”

The Riginos family purchased the Onda brand and moulds four years ago, reviving the Greek yard that was founded in 1962, and they are building out of a Norwegian-owned yard in Athens. At the time of purchase, Onda was mainly building 10- to 13-metre RIBs for the military.

George’s father runs the brokerage companies Riginos Yachts and White Sails. “Being in the industry so many years, and selling our share of tenders, we know what our clients want,” says Riginos. “We had been selling a lot of large chase boats in recent years, so we thought it would be interesting to make our own.” Riginos showed Mannerfelt pictures of tenders they liked, all of which were Dutch or Scandinavian, an inspiration that can be seen in Onda’s stylish exterior lines.

The first boat to be launched by the reinvigorated Onda brand was a 9.75-metre limo tender with a forward helm and protected seating for 14 inside the leather and suede interior. “Then came the hardcore RIB,” says Riginos, of the 10.3-metre 341P, based on a military patrol boat, redesigned as a chase boat for the superyacht set.

Falling between the two in style and prowess is the third model, the 9.9-metre 331 Gran Turismo. It is built on the same hull form as the limo tender but features a modular design.

Feedback from brokerage clients over the years told Riginos a few things: owners wanted a boat with minimal spray, high gunwales and a smooth ride. But paramount on their clients’ wish lists was customisation.

“So many times we had clients say, ‘I really like this boat, but can you ask the shipyard if they can do this or that’ – and often the answer from the yard was ‘No, we can’t.’” In Onda’s modular design, every piece of the interior is from a separate mould. Tender builders will often integrate elements into one mould as it’s simpler and reduces build time. “The problem there is the boat will come out one way and you can’t change it,” says Riginos. He says it takes Onda a month or two longer to build modularly.

There is a variety of options for owners – even the entire console can be moved, as long as the centre of gravity is considered. Onda is open to clients’ ideas. And, of course, clients can choose any colours or styling they desire as well as outboard or inboard engine options.

The boat we are on in Monaco has inboards, with twin 370hp engines. It’s the first time Onda has built a spec boat, with the express purpose of debuting it at the yacht shows. This is actually the fifth hull of the 331GT series, but it’s the first one to be revealed to the public. The previous four, all featuring outboard power, were quickly sold to clients.

This 331GT has a sunpad aft and seating area forward – the leather is by Italian brand Italvipla, and there is an eye-catching woven pattern on the seats. The centre console opens to the front, and there is a toilet below. “Most people never really use it though, so we created these racks you can slide over the toilet to store luggage,” says Riginos.

The hardtop is carbon fibre for light weight, while the console and everything else is vinylester fibre, a high-quality GRP. The windshield isn’t huge, but Mannerfelt conducted an airflow study ensuring it would be aerodynamic while also offering enough protection from the elements. So even on this breezy day, you don’t feel wind-whipped.

This boat is priced at €290,000 (£242,750). With outboards, that would drop to about €240,000. Onda presents an intriguing semi-custom option within the superyacht tender sector, positioning itself as an alternative to custom builders like Pascoe or Compass. It is building three more 331GTs and two limo tenders, all already sold. It is doing well for a new company, which Riginos says is due to it being known from its brokerage businesses.

With two 250hp outboards, the 331GT will do 60 knots. “Most will never drive at that speed,” says Riginos, “but they like to know it’s possible.”