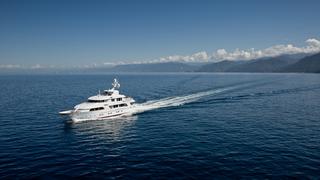 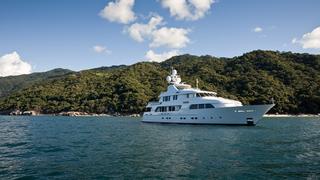 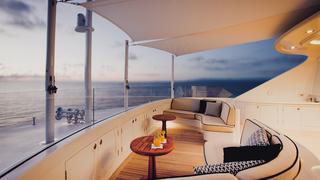 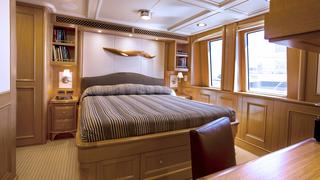 Given all the sumptuous spaces afforded by a superyacht, it’s not often you hear of owners most captivated by what’s on its lowest deck. For the owners of the new 40.5 metre Delta Marine Onika, the object of their affection is known as the pipe tunnel: a conduit running along the hull’s bottom where pipes, cables and wiring extend like arteries and nerves down an arm.

This labyrinth of precisely labelled and organised connections is important in varying degrees: if a CAT5 cable fails you may lose the internet, but a defective fuel line requires immediate attention. Regardless of priority, Onika's tunnel, unusual on a 40 metre yacht, allows for quick inspection and correction and her captain Norm Pigott and engineer John Doty won’t be scraping knuckles or bending spines to attend to whatever may go wrong.

Accessed through a floor hatch on the lower deck, the tunnel is cool, clean and spacious. “I’ve been down there and it’s a marvel what Delta has done,” the owner says. “I’m proud of that space and I know Delta is, too.”

Onika’s owners are repeat clients who built their first 33.5 metre Delta in 1993. Returning to Delta was never in question; what mattered was building the next Onika in a traditional style akin to the original.

The Delta Design Group handled the project inside and out, delivering to her owners in June 2014 a classic beauty, with a long sweeping sheer and graceful bow. The owners loved the previous yacht, so the new Onika is not a radical departure and even carries over such items as the ship’s bell and the steering wheel.

The cliché holds true: Onika’s beauty is more than just skin deep, as demonstrated by the pipe tunnel. Delta treats the places that don’t show with the same attention and care as those that do. “That’s always been a rule around here,” confirms Jay Miner, Delta’s chief naval architect. However, what you do see is consistently spectacular.

Onika sleeps the owners plus four guests in three very spacious cabins on the lower deck, which can be accessed by a lift. The lower deck features panelled walls of clear, straight-grained German Spessart oak, finished naturally to a light honey colour. All the en suites have heated marble floors, with the stone extending up to a wainscot where it meets with classic beach house-inspired wall decorations. Fabrics offer a dramatic colour palette of rich blue, red and green jewel tones with varying textures.

The suites’ dressers and select furniture pieces are uniquely shaped in bow and serpentine configurations. Mahogany and chestnut burl with anigre inlays are among the meticulous details within each piece of furniture. All cabins have iPads that can operate the entertainment, climate control and lighting systems.

In their full-beam amidships suite, Onika's owners particularly enjoy the study, an addition that just made sense when they decided to upgrade after 20 years. Another favourite spot for the owners is the upper saloon. Here, expansive windows and a painted, antique, white wood bookcase brighten the German oak panelling and teak-planked floors. Among the carefully detailed custom furniture pieces is a gleaming teak-planked coffee table with nickel sea-rails and a bow-shaped sapele and anigre-striped console. Tucked in the corner is a cocktail cabinet in crotch mahogany with dentil moulding and fluted sides, and neatly fitted in a cove near the entry is a 19th century mercury barometer. The cumulative effect is a room perfect for reading, conversation and card games.

This is where the owners spent a good amount of time during Onika’s maiden voyage to Alaska, according to Pigott. “The atmosphere in the upper saloon is soft and casual,” he says. “It’s a different feel than other areas of the yacht like the saloon or dining room. It has a more British West Indies air of relaxation and elegance.”

Onika is hardly a floating apartment exempt from the sights, sounds and smells of the sea. She was built for sailing worldwide and, while relatively petite, she has all the best features Delta offers. Her traditional tri-deck profile features walkaround, sheltered decks and the uppermost deck has a hardtop for sun protection and for the electronics mast. The carbon fibre mast can be folded over on a hinge, allowing the yacht to fit inside her home boathouse with plenty of room to spare.

From the project’s beginning in the spring of 2012, Onika's_ engineers targeted the twin annoyances of noise and vibration with the goal of total elimination or great reduction. Delta uses bushings, rubber mounts and other such spacers throughout the decks, allowing them to essentially float. Vibration has nowhere to travel and machinery noise is kept at bay. The result is any ambient noise aboard _Onika is at a very acceptable threshold. “You still want to know you’re on a boat,” Miner notes. “It’s the same with the Quantum QC-1200 stabilisers: they take out the most troublesome motion, but not all the motion.”

Onika is hardly a featherweight at 350 tonnes, but her composite construction made it easier for the Delta team to meet the sought-after draught target of 2.1 metres. In addition, the composite hull delivers the required strength for a go-anywhere yacht with less maintenance than a metal hull. When ultraviolet rays eventually make it necessary to take on new paint, it will adhere better to a composite surface than a steel surface. “Unless you want an Ice Class rating, there’s no necessity for a yacht of this size to be made out of steel,” Miner says. “Here at Delta we also build yachts with steel hulls, [but] in this case, the composite hull met [the owners’] design requirements to a T.”

“The new Delta hull design combines the best in long-range passage-making capability and fuel efficiency along with moderate draught,” Miner says. “Shallow-water destinations such as the Bahamas are accessible. In profile, the bow has a long overhang, with enough flare to keep the decks dry and present an overall classic look.”

Powered by twin Caterpillar C32 ACERT diesel engines at 1,600 horsepower each, Onika can top out at 16 knots but will cruise at 13.5 knots or less. With her 55,720-litre fuel tank she has a transatlantic range of more than 4,000 miles and in recognition of the project’s high standards, the owners elected to build Onika to Lloyd’s Maltese Cross 100A1 SSC Yacht G6 MCH classification. Cruising plans for Onika call for the Galapágos and Caribbean – and after that, who knows?

“We wanted to be ready for travels anywhere in the world,” the husband says, “and with another Delta yacht, we knew we could. It was as simple as that for us.”