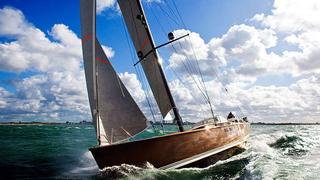 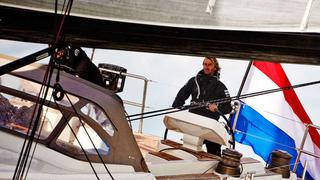 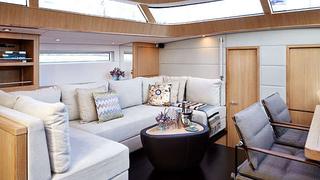 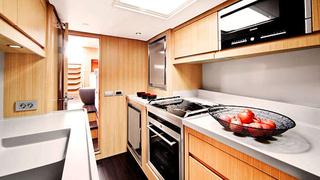 Contest Yachts' largest yacht to date, the 22 metre Contest 72CS PH3, was driven by an innovative owner who wanted his sailing experience to combine comfort and performance. With this new launch, the Dutch builder is edging ever closer to joining the superyacht market in terms of length – and PH3 proves Contest is already in the premier league when it comes to its looks, finish and performance

Building powerful sailing yachts with sophisticated equipment and interiors, Contest Yachts in the quaint Dutch harbour village of Medemblik has a distinguished history. As the third generation of his family at the helm of a yard founded in 1959, Arjen Conijn embraces the past inherited from his father and grandfather and a future based firmly on the twin pillars of traditional craftsmanship and ultra-modern technologies.

‘We have been a pretty innovative yard over the decades, including being among the first to introduce central cockpits, wing keels and the vacuum-injection method,’ he says. First developed in cooperation with Dutch research institute TNO in the early 1990s, vacuum injection is used for the composite parts of PH3’s hull, deck, main bulkheads, bracket frames and superstructure. ‘While other yards have now started using the technology, ongoing developments in materials and methods have kept us a step ahead,’ Conijn contends. ‘Contest is also one of only a handful of semi-custom yards in the world able to meet Lloyd’s hull specifications.’

An increasing emphasis on performance and design has resulted in a string of new models that build on the traditional craftsmanship values that gained Contest its name. The most obvious example was the decision to break with tradition and build a Contest motor yacht after years of turning down requests. The first of this new line was unveiled at the recent Boot Dusseldorf, and there have already been follow-up orders.

Austin Van ‘t Wout, owner of PH3, was coming from a very different angle, but his desire to go larger than the status quo was one of the key drivers behind Contest making the move to a new flagship sailing yacht that has extended its range by three metres. An avid Optimist sailor class as a teenager, Van ‘t Wout previously owned a Jeanneau 43 and a Contest 55CS, and he chartered larger boats in the Mediterranean and Caribbean.

‘I liked the existing Contest 62CS but wanted a small superyacht rather than a large family yacht,’ he says. ‘It’s great to build the first of a series – you don’t have the expense of a one-off yacht and yet can provide lots of input. I did a great deal of research, including visiting local ports during my many business trips to examine the options. Having been spoiled by chartering larger yachts, I wanted to have everything I had enjoyed there on board my Contest 72CS.

‘All my extra demands for equipment usually found only on larger yachts continued to increase the weight of the boat and, as I still want to compete in regattas, we had to shed the kilos elsewhere. PH3 is the first yacht of this kind to have an all-carbon mast with in-mast furling system, a carbon boom and full-carbon rigging, all by Hall Spars.'

Van ‘t Wout enjoys pushing the envelope of innovation in his work offering raw material solutions for the steel industry. ‘Leveraging on my experiences in business and sailing, I set out to own the ultimate boat in this size bracket not only in terms of equipment innovations but also with hydraulics, data communication and electronics. Contest was keen to do the same in its own areas of expertise and the final result is astonishing. During the sea trials we crossed the Channel in a Force 8 gale, and I felt completely safe at all times.’

The testing weather conditions on this maiden voyage also instantly showed the value of a clean deck that has been optimised for performance and ease of handling. Highlights include a hydraulic code-zero furler on the bow and many below-deck features such as the flush inner forestay furler, the magic trim solution for the genoa sheet cars, a foldable anchor and the flush-mounted capstan. All equipment can be hydraulically operated from the aft cockpit steering position, which offers easy access to all the sail-trimming systems. There is a second adjacent cockpit for guests featuring a wealth of home comforts, including dining for 12.

Contest Yachts already has a very good reputation for the exclusive finish of its interiors, and a new partnership with Amsterdam-based British designer Gillian Brown from Wetzels Brown Partners, has upped the ante still further. Although Brown has spent the majority of her career creating select homes, restaurants and furniture, over the past decade she has styled impressive interiors, including the 30.5 metre CNBChrisco S, the Wally 164 Better Place and the refitted FeadshipHeavenly Daze.

‘Arjen and I had been talking about working together for several years and were waiting for the right time to synthesise the Contest quality template with a contemporary new look that would redefine the Contest of the future,’ she says. ‘PH3 is the first yacht in which we have preserved and enhanced “traditional” Contest details such as the curves, the exquisite joinery and soft edging, while adding modern options in different wood types, padded panels, leather touches and so on. Our goal was to ensure the design supports the owner’s lifestyle, while at the same time creating a unified image for the Contest family.’

The overall theme is calm and contemporary, with light oak panels offset by dark floors, combined with innovative design features such as streamlined joinery, recessed hand grips and doors with a more modern look than Contest’s traditional styling. The simple lines and symmetry of layout create a a peaceful place to reside. The social centre of the yacht is her spacious saloon, which features two large sofas, a big table, a compact coffee area and colourful fabrics by Missoni. This is a very airy spot, made even more so by the leather panelling and mirrors adjacent to the portholes that reflect the light.

Located aft, the master suite is also surprisingly voluminous (you really do have to remind yourself that this is ‘only’ a 22 metre vessel) with a king-size bed, vanity table, two long sofas and a large en suite. Carpet enhances the sense of luxury and gives a distinctive identity to this impressive space, which also offers the owners direct access to the aft deck. PH3, which is currently listed for charter with Ocean Independence, also has guest cabins, with double-size beds and Pullman berths, have separate en suites all detailed with wall-mounted taps, new colours of Corian and large showers.

The large galley is positioned forward, connected with the captain’s cabin, the crew lounge and the extra crew cabin. As well as giving a considerable degree of privacy, flexibility is built in so should the owners choose to sail the yacht themselves – which they are perfectly capable of doing and for which the yacht is suited – they can do so with up to nine friends or family members.

‘From the traditional quality and comfort to the modern design and performance, this is the best example of the steps we are making towards building superyachts,’ concludes Conijn. With PH3, he and his Contest yard certainly seem to have found the formula for success.