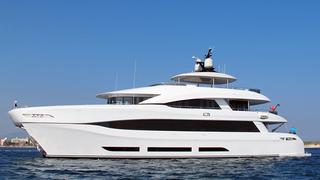 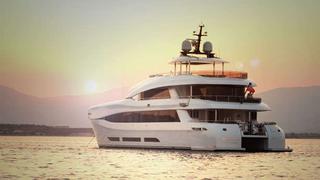 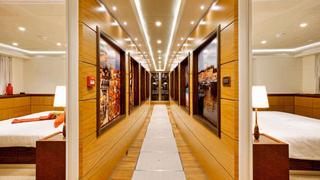 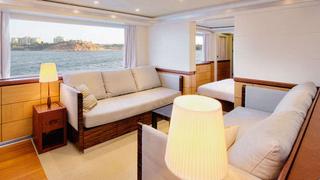 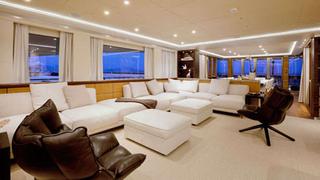 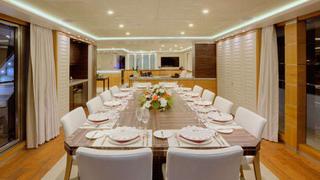 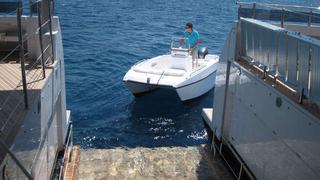 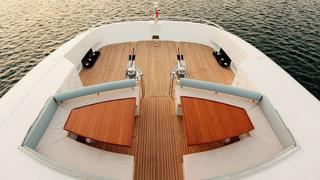 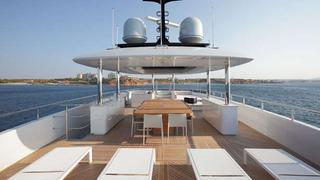 Flexibility. It takes just that one word to summarise the philosophy behind Curvelle and its premiere offering, Quaranta. The project began in 2005 with a team of naval architects and specialist catamaran designers, including Incat Crowther of Australia as naval architect, and High Modulus of the UK as structural engineers. Curvelle founder Luuk V van Zanten, who led the international group, shared their conviction that catamarans present several advantages over monohulls.

Curvelle’s first goal was to design a beautiful performance power catamaran that would challenge traditional builds and offer increased versatility to maximise operation time. The design’s main objectives were: to achieve about 50 per cent more interior space than a monohull yacht of similar length; develop a cabin arrangement that gives wide-ranging flexibility; create a hull capable of reaching 20 knot-plus speed with at least one-third less fuel consumption, and to do all of it at about half the cost of a similar volume and quality performance monohull.

The outcome is a 33.7 metre, launched at Logos Marine in Tuzla, Turkey, in spring 2013 and named Quaranta, which means ‘40’ in Italian. ‘My family lives in the Balearics,’ says the Dutch-born van Zanten, ‘and I am very much fond of the central Med’s culture. The name Quaranta was chosen because we drew this 33.7 metre catamaran with the aim of obtaining the volume of a 40-metre single-hull yacht. We thoroughly compared our square metres for guest use to those of 10 mainstream builders’ 40 metre models and the result is more than satisfactory.’ Indeed, we have verified that only the Princess 40M has more interior space than Quaranta, which is unrivalled in terms of exterior deck space at this length.

Quaranta, is also available for charter. ‘During the summer of 2013, Quaranta had 10 to 12 guests on board for three consecutive months,’ says van Zanten. ‘It was a success, the very first reward for our approach and long-lasting efforts.’ The successful, busy season was due in part to the yacht’s extremely flexible layout that can accommodate many group combinations. All guest suites are on the main deck. A long corridor decorated with marine-themed photographs divides four suites (two on the port side and two on the starboard side) located aft of a large spiral staircase leading to the upper saloon deck. Two more cabins are forward of the stairs.

Due to the absence of structural bulkheads, they can be configured as three huge suites or six en suite cabins, or any permutation of those. When two cabins are joined to create a suite – by sliding a movable bulkhead – the beds in the second suite can be made into sofas to create a private saloon, and the two bathrooms become a his-and-hers. In addition, each suite’s bed can be configured as a double (oversized queen size) or as two singles. ‘The configuration can be changed in a matter of hours, a few minutes if the required changes are small,’ says van Zanten.

‘On board Quaranta, nothing is permanently set,’ he continues. ‘Let me give you [another] example: the dining tables are all made up by massive wood modules that allow quick reduction or enlargement according to the precise number of people that need to be accommodated.’

This ethos of flexibility also applies to ownership. Curvelle has developed a syndicate ownership that enables clients to buy one or more of seven shares of the yacht. ‘Quaranta has been specifically designed for such a formula,’ van Zanten says.

In addition to the inherent space afforded by a catamaran design, the construction material of carbon hybrid composite added further volume. ‘Since the material is so strong and light, we were able to reduce the structural engineering requirements together with our structural consultants High Modulus, which resulted in more headroom and more floor space overall,’ van Zanten says. ‘We took inspiration from the offshore wind blade construction industry and also from the modern airline construction business.’ In late 2010, van Zanten turned to Logos Marine to develop and build provisional male moulds and build the hull and superstructure in carbon/e-glass and epoxy composite.

With four decks and a nine metre beam, Quaranta is two metres wider and has one more deck than would be found on a single-hull yacht of a similar size, yielding approximately 50 per cent more space for guests. Sicilian naval architect Mauro Giamboi was challenged to take all this volume and wrap it in an elegant package that would have the lines of a regular monohull when seen from the side. He met the challenge brilliantly.

Expanding the space further, at least visually, are the 2.7 metre wide by one metre tall windows in each of the guest rooms. In conjunction with the great views, the interior design creates a clean, airy and warm atmosphere. London-based designer Alex Isaac, who recently became luxury furniture maker David Linley’s creative director, made extensive use of white leather, American oak and Bolon woven flooring for an attractive and easy-to-maintain interior.

The same criteria of flexibility and ease of use are evident on the upper deck, dubbed the saloon deck, where the main saloon and main dining area are located. Here, a portside wall of windows opens completely to merge the dining area, situated aft of the saloon, with the outdoors – only the starboard side features fixed windows.

Yet another dining space is on the remarkably spacious and open top deck, under the shade of the radar arch and a bimini. On the opposite end is the spa pool, surrounded by sun loungers and sheltered by a glass screen forward. A wet bar is to port and plenty of space is left to set up additional sunbeds.

The six metre-wide central platform not only makes a great swim platform, it is also used to easily lower the tender from its housing on the main deck into the water. Tested for up to three tonnes, the hydraulically operated platform is more than enough to lift the yacht’s 4.6 metre custom fibreglass catamaran tender (powered by a 50hp outboard engine and seating seven), a submarine or even a large car. Furthermore, with the help of a track in the main aft deck’s overhead, a personal watercraft can be lifted and stowed on the aft deck. A portable, manual aluminum crane able to handle 500 kilos is available for an additional crew tender.

Both hulls of the lower deck are dedicated to crew operations and accommodation. The crew of six, including a captain, an engineer, two stewardesses, a chef and a deckhand, are accommodated in three en suite double cabins. The rest of the hulls house the galley, laundry, crew mess and twin-engine rooms and lazarettes. Crew can access this area from both the foredeck (forward of the bridge on the upper deck) and from the main deck. _Quaranta’s _crew quarters adhere to MCA LY3 requirements, which came into effect in August 2013 partly in response to the new Maritime Labour Convention.

Powered by twin 1,900hp Caterpillar C32 engines, Quaranta performs well at all speeds. Economical cruising speed is between eight and 12 knots, average cruising speed is 13 to 15 knots and fast cruising is between 16 and 21 knots. The hull configuration allows for this wide spectrum and the catamaran’s inherent efficiency gives it extended range. The 33.7m catamaran, which is in compliance with MCA rules for unrestricted navigation, has sufficient range to cross the Atlantic at eight knots.

While van Zanten chose a one-off methodology for the construction of hull No.1, this first catamaran is not to be the last. Another Curvelle is already on the drawing table and while van Zanten is not ready to disclose too much yet, he gives us a clue. The name of his new concept is Cinquanta, which in Dante’s language means ‘50’. All of a sudden things appear clear: Curvelle has set its next target.