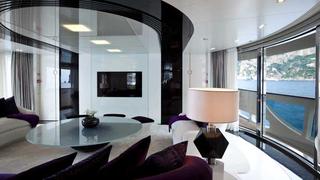 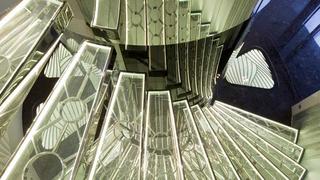 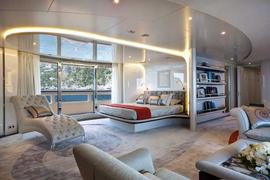 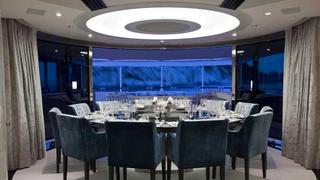 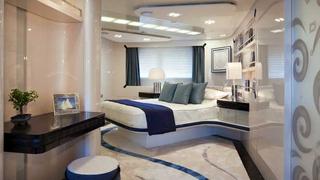 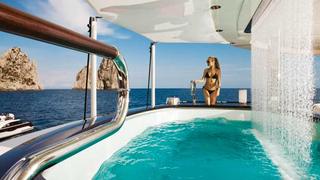 Quite Essential: All the elements of a perfect superyacht

Quite Essential (ex-Quinta Essentia) is of all-aluminium construction and is strikingly handsome in creamy-white paint, with a contrasting regal red that has been used to cover the transom, moving forward as a broad band through the bulwarks almost to the bow, then outlined by a narrow silver stripe. The effect is dramatic yet easy on the eye.

Externally, the lines are arguably among the best ever penned by Frank Laupman. ‘The owner expressed a desire to see the sea from just about anywhere inside, regardless of standing, sitting or lying down,’ he says. ‘This idea was carried through to the main and upper deck saloons, as well as the owner’s quarters.’

Designed to be semi-displacement, this powerful yacht is capable of 24 knots with a cruising speed of 18 and is the end product of some of the greatest names in the industry, not forgetting the owner’s astute input of ideas and specifics. Apart from Laupman of Omega, Heesen’s in-house naval architects, in consultation with Van Oossanen & Associates, were responsible for the naval architecture. Ken Freivokh laid down the parameters for the interior, while Michela Reverberi, with the owner’s assent, produced a delightfully balanced and enticing décor.

The original owner’s choice of ship’s name was inspired by the gods of Greek mythology and their guardianship of the quinta essentia, the magical fifth element, and was intended to set the theme for the décor. In this way, the four base elements – earth, air, fire and water – would be used to express the interior, leaving the yacht as the mystical unknown element, the quinta essentia.

Even when launched, it was much remarked that the interior evoked the sensation of being aboard a 72 metre, substantiated by remarkably high ceilings and relocation of the galley one deck down. This latter decision expands the owner’s accommodation into a veritable apartment and the feeling is continued in the guest accommodation, where everything is full of natural light. General layout is for six en suites which consists of the owner’s apartment, a VIP, a twin bed cabin and three doubles, two of which will convert into an additional full-beam VIP if required.

Continuing the theme and sensation of light and space is the starboard main deck side-entrance lobby, where a spectacular spiral glass staircase, whose Bernard Pictet glasswork walls resemble frozen streams of water, surrounds a cylindrical glass lift, both of which serve three decks.

Public spaces are delightful, with inviting seating areas and big windows making maximum use of the glazed balconies. Formal dining is on the upper deck and comprises a circular glazed table set within huge curved-glass doors aft. Immediately forward is a semi-circle of sofas positioned so as to take advantage of the panoramic views or the entertainments centre. Similarly, the sun deck has an equally huge outside dining table, plus an intimate saloon facing forward.

On the main deck, the owner’s wife’s love of flowers led to discussions with Reverberi resulting, for example, in the cushions having the end third covered in a riot of wildflower arrangements, with matching throw cushions. The result is joyous yet relaxing.

In keeping with the overall theme of base white for walls and ceilings, carpeting throughout is hand-woven white silk, within which Reverberi has introduced diminishing wave-like brush-strokes in colours indicative of the elements, while her intuitive interpretation of the guest suites is masterful. Often where other interiors offer ‘nice but untouchable’, Reverberi has achieved the opposite and made hers pleasingly livable.

Outside deck areas are sensational, having been planned for maximum enjoyment and comfort, yet with the same expression of spaciousness. The sun deck forward in particular is vast. Many yacht's main decks aft are virtually unusable in terms of privacy when stern-to in the marina. For Quite Essential, which has a spa pool aft on her main deck, a wide, opaque curtain of water falls from the deck above. This remarkable feature is dense enough to project movies on, ensures privacy and helps keep the area cool.

Quite Essential navigates with state-of-the-art electronics and carries a superlative guest-controlled system for audio/visual, communications, general functions and crew calling. Several underwater cameras permit viewing of the world below on any monitor on board. Another interesting feature is the side-loading float-on-float-off system for the 7.5 metre Limo tender, which has its own docking pool.

While being the owner’s pride and joy, she is available for selective charter on both sides of the Atlantic, with Nakhimov in Monaco. A good selection of water toys plus a top-class chef and immeasurable levels of comfort should guarantee happy go-anywhere ‘elemental’ charter delights, fit even for the hedonistic gods of mythology.

Lady Petra: The yacht that puts personality into semi-production