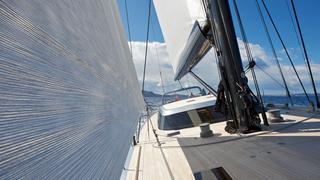 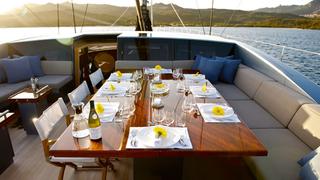 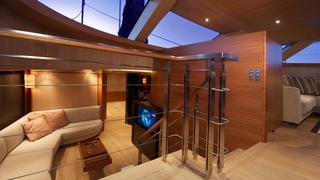 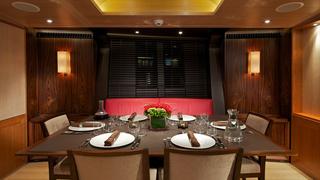 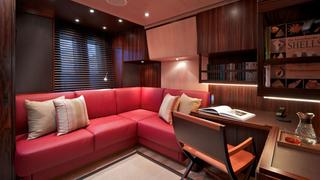 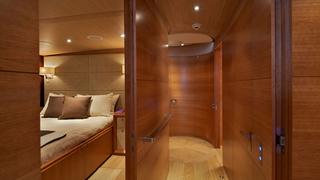 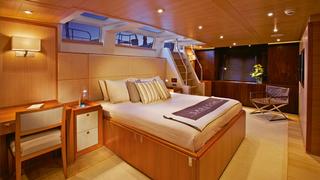 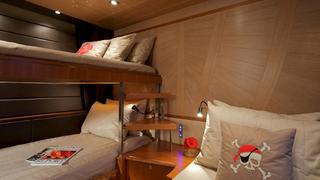 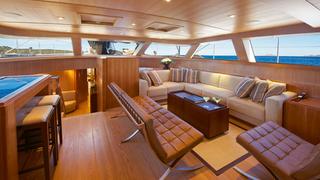 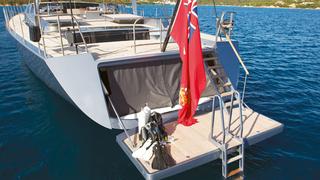 Sarissa - the family sailing yacht with a performance edge

We set off from Porto Cervo on the 42.6 metre carbon sloop Sarissa – completed at Vitters just two months previously and named after a long spear used in Hellenistic warfare – bound for Palma. As we made our way through the Tyrrhenian Sea past the cluster of picturesque islands to the north, her captain, Greg Monks, told me something of the background to the boat. ‘Sarissa was built for an experienced boat owner with a young family. He wanted a performance yacht that they could spend long periods of time on and go to remote, isolated places where they could enjoy activities including fishing, diving, spear fishing and rock climbing.’

The brief to combine both comfortable, extended family cruising with a performance edge – the yacht will compete in several of the superyacht regattas – fell on naval architect Bill Tripp. ‘Sarissa’s lineage stems from the aluminium Mystère and the carbon/composite Saudade,’ stated Tripp. ‘She is a sleek pilothouse sloop with a fully modern hull shape, sail plan and foils. Like Mystère she is built to MCA; like Saudade she has a sleek hull and a racy edge to her performance; and like both, she has a lifting keel.’

Tripp included an aft cockpit in his design, but it was the owner who had the idea that it should also be an occasional swimming pool. ‘We filled it up for the children when they first arrived after a long plane journey,’ first mate Brad Walker recalled. ‘You should have seen their faces when they saw it all glistening in the sun with floating ducks and a water hammock in it.’

Sarissa has captive reel winches for the sheets, running backstays and main halyard, keeping the vast deck areas wonderfully safe and uncluttered. The owner put aside early concerns that an arch for the mainsheet might spoil the line of the yacht, and decided that keeping his children out of harm’s way was paramount. The result is an arch very much in keeping with the deck styling, which provides an uninterrupted deck space between the two cockpits. It will also have a number of innovative uses: it can support a climbing training-board so the owner can practice rock climbing, for instance, and there are plans to suspend a projector from its underside to display films on a screen mounted to the backstays.

For racing, Sarissa will use a square-topped mainsail. To allow this to happen, the normally fixed, twin masthead backstays will become running backstays, when their lower ends are transferred to the cruising runner tackles and their captive reel winches. In addition, the yacht will carry a staysail, a code one and a ‘top down’ furling spinnaker, each on its own furling cable.

Tripp met the owner in November 2006. ‘He wanted a go-anywhere type of boat, with a sports car feel to it,’ he said. ‘He wanted to experience adventures when he got to destinations but he also wanted to enjoy getting there.’

‘Our last boat was a Swan 82, which was fantastic,’ added the owner. ‘But we outgrew it and wanted to go up in size, but didn’t want to lose the experience of sailing. We still wanted to be in touch with the wind and the water.’ Initially a boat of around 36 metres was discussed, but Rhoades Young’s subsequent involvement and the suggestion that the owner’s family might grow, necessitated that the boat should do so as well.

Sarissa’s construction didn’t start until early 2009, which gave plenty of design time. ‘That’s really ideal not to rush that period because you get to develop your ideas,’ Tripp said.

_Sarissa’s _carbon hull was built in the UK at Green Marine – a company since bought by Vitters – then taken to Holland for completion. Hamming, Tripp and Rhoades all agree that building a carbon boat requires a lot more coordination between all parties, to maximise the use of space throughout, because the options for cutting through the structure are not as straightforward as they can be in a metal boat. For instance, to incorporate the vertical hull windows – which give wonderful ‘sky to sea’ views throughout the accommodation – required a great deal of planning with regard to both hull structure and service routes.

Sarissa’s interior décor mainly consists of three timber varieties and very little in the way of fabrics – an interior style that, according to Rhoades Young ‘was to represent the romanticism of sailing and travel’. The result is a synthesis of an elegant sailing yacht and a relaxed beach house.

‘The owners have modern tastes but they wanted the boat to have a warm, cosy, family feel for their amazing adventures,’ said Rhoades. The headlinings, floors and several bulkhead panels are oak with various washed treatments. Other bulkheads and much of the furniture is cherry, but darker materials have been used outboard in the lower cabins. ‘We used the rosewood and dark leather to help express the difference in geometry between the rectilinear interior furniture and the beautiful flowing lines of the hull and portlights,’ Rhoades continued. ‘And we wanted to express the structure of the yacht, so we have the exposed mast and carbon claddings over the frames. We couldn’t show the actual frames, as the whole interior is floating for sound and vibration control.’

Forward of the main saloon there are three examples of Rhoades’ philosophy that ‘on a boat of this size we need to double-use space and ensure that 100 per cent of the boat is being used 100 per cent of the time’. Between the dining area and the galley there is a removable fore-and-aft bulkhead that allows either formal dining or a casual family breakfast room atmosphere; the study, which has a more serious ambiance with its predominantly rosewood surfaces, can be converted to a double guest cabin, with the dayhead then becoming its en suite bathroom; and the lower saloon is a cosy family snug area as well as the passageway from the main saloon.

Rhoades used various techniques to create the illusion of extra space. For instance, by opening up the mast head bulkhead and carefully staggering the interior volumes diagonally, it has created vistas of over 13 metres in both directions from the upper saloon of a 42 metre boat, making the yacht feel much bigger than the sum of its parts.

In combination with this, passageways have been omitted by incorporating them into the living spaces, with the exception of the aft curved corridor, which is a special experience in itself. It creates a generous double-height lobby at its entrance and then curves through the aft ship to a feature rotunda outside the owner’s cabin, naturally lit by the deck above.

And in the owner’s and guest cabins aft, there are open doorways to the bathrooms, with just the basins on view and the more private sections hidden around corners, extending the visual length of the cabins. The owner’s cabin has a great deal of natural light, a lot of which comes from windows that look into the swimming pool, adding to the fun element evident throughout the boat.

The children’s cabin – linked to a nanny’s cabin through a shared bathroom – is Rhoades’ favourite, and here the fun continues. ‘The idea was to make it a little yacht for the children within the big yacht,’ he said. ‘With the inboard bulkhead mirroring the hull side and the aft bulkhead veneered to look like the front of a traditionally-planked boat.’ Education and entertainment are both evident in the deckhead, where scores of tiny fibre optics represent the stars of the night sky, with the Northern or Southern Hemisphere selected at the flick of a switch.

In many deck saloons the seating is raised to enhance outside views, but _Sarissa’s _owner made the deliberate decision not to do this. ‘It was more important to the family to have a flat single deck that flowed well and with good headroom,’ Rhoades explained. ‘You still have a sense of being in touch with nature, as the space is bathed in natural light. It’s all part of having a series of different experiences.’ When standing, however, or when sitting at the navigation station or bar, the all-round views are excellent, and the gently undulating line created by the oak surround above the windows – mostly determined by Tripp’s external styling but enhanced by Rhoades – is particularly pleasing.

Before our voyage the owner and his family had enjoyed two separate Mediterranean cruises. ‘We couldn’t be happier,’ he told me. ‘We started this process five years ago, but we couldn’t know it would all fit together until we saw her on the water and first sailed her. Some of the unique elements like the paired vertical hull windows and the swimming pool have worked out really well.’

After a five-week period in Palma, where Vitters attended to small finishing touches necessitated by a rushed departure from the yard and the subsequent experience of using the boat, Sarissa went to the Caribbean for a Christmas family cruise. Now it’s back to the Mediterranean for summer and after that further afield, perhaps to the Pacific, where the owners will continue to enjoy their amazing adventures.