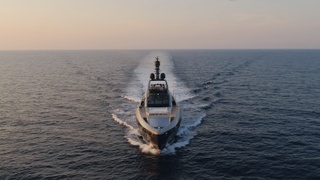 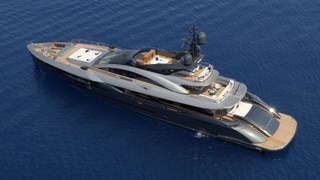 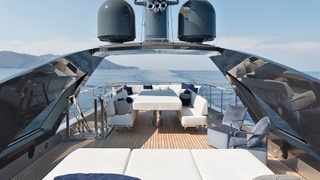 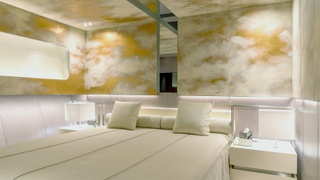 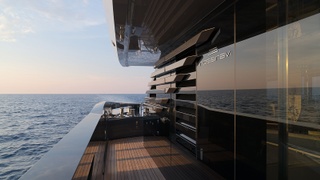 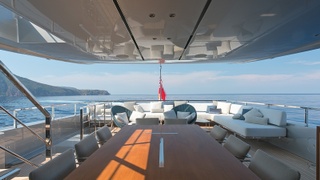 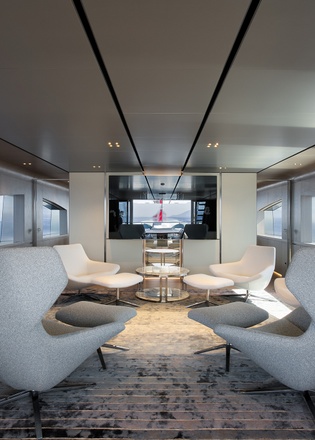 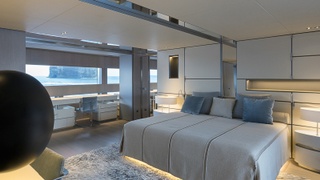 While Flying Dagger is this owner’s first build with Rossinavi, his relationship with the Italian yard dates further back than he may initially have realised. “We built his previous yacht, a 41 metre, when we were doing contract work for another shipyard,” says Federico Rossi, Rossinavi’s COO. “So while he didn’t know us by name, his crew and project manager were already well aware of us and how we work.”

Ivana Porfiri had designed the interior of the owner’s previous yacht and suggested Rossinavi as a candidate for his new build. And since she was already involved in another large project and couldn’t take on more work, she also suggested another interior design studio. “How many ways can I say that I love that woman?” wonders Rossi with a laugh. His sentiment is echoed by Claudio Lazzarini, of Lazzarini Pickering Architetti (LPA), the Rome-based studio she recommended. “Ivana is a real friend and a rarity in this dog-eat-dog world,” he says.

When the owner visited Rossinavi in Viareggio he found the design he wanted to build right away. “He was planning on using the yacht as a dayboat, so he was looking for something fast but luxurious and comfortable. When he saw a sketch from Enrico Gobbi’s Team for Design studio, he said ‘That’s my yacht,’” Rossi recalls. “More than that, he said ‘That’s my yacht because it looks like a car,’” adds Gobbi. “And it’s no coincidence: the concept was called Aston, after the Aston Martin cars that inspired some elements. The yacht has very sporty, automotive-inspired exterior lines and taut curves that kick up aft for a dynamic look.”

Looking fast is one thing, moving fast is another. That’s where naval architect Giovanni Arrabito comes in. “Flying Dagger’s owner was interested in speed for fast day cruises,” says Rossi. “And as chance would have it, we had already developed large and fast hulls for water-jet propulsion.” A few years earlier Rossinavi had been approached by an owner who wanted a 60 metre yacht that could do 30 knots. “We thought it would be impossible but we sat down with Giovanni to see what we could do,” says Rossi.

“We took four hull models scaled to a 60 metre range for testing at [maritime engineering consultancy] SSPA in Gothenburg,” picks up Arrabito from his office in Livorno, Italy. “We were looking for the fastest semi-displacement lines combined with the best seakeeping properties and got even better results than we were expecting.” The data showed which hull was the best overall and which features could be incorporated from the others into the top performer. “We called the project the X Series by Arrabito Naval Architects and developed a range from 40 to 70 metres.”

While the commission for that first 60 metre yacht never came through, Rossinavi and Arrabito have put their investment in new hull shapes to good use: both of Rossinavi’s 2018 launches, 63 metre Utopia IV and Flying Dagger, have water-jet propulsion and have performed beyond expectations – Flying Dagger hitting 31 knots during sea trials against a projected top speed of 27 knots.

“We discovered that the key to success for this type of hull is to keep it clean and free of underwater appendages; that’s why we installed a GyroMarine gyroscope stabiliser instead of fins. And you have to be careful to the point of mania to balance the distribution of weight. But we’re not thinking of specialising in water-jet hulls,” says Rossi. “It was a coincidence that we had two owners interested in the same performance points at more or less the same time. Still,” he concludes with a smile, “putting in an order for seven water-jet engines had people gripping the edges of their seats.”

On a luxury yacht, weight distribution considerations go way beyond the placement of fuel and water tanks. As Rossi says: “It’s easy to create a ‘luxury’ impact with precious but heavy materials like onyx, harder if weight is a major consideration. And often a sporty yacht’s exterior lines can compromise interiors, making for darker and more cramped spaces.” Gobbi’s intelligent space distribution and LPA’s beautiful yet lightweight interior show how careful study and innovative thinking can resolve all of that.

Like the owner’s previous 41 metre yacht, Flying Dagger has an interior and exterior planned as a single unit. “We didn’t want to follow the informal exterior and more formal interior scheme, we wanted a look that was uniformly elegant, where the rapport with the surrounding natural elements would be simple and direct,” says Lazzarini. “The owner’s wife was also interested in designing the yacht along natural themes so that became our motif.”

Boarding the yacht from the extra-long retractable ramp, the aft deck has two console tables under the overhang that can be joined to become a dining table. “It was very important to the owner’s wife to offer her guests a variety of options for dining,” explains Lazzarini. “The same tables used on the main deck aft can also be set up in the main saloon – we didn’t weigh the space down with a dining area and instead opted for this more flexible solution.” The aft deck overhang ceiling has air con outlets inserted in narrow strips that continue through the main saloon, creating a space-lengthening perspective and making this area a temperate buffer zone between the hot outdoors and the fully cooled indoors.

Enlarging and elongating perceived space was important for LPA. “Main saloons aboard this type of yacht are usually large, but with ceilings that are so low that you don’t get such a great spatial experience,” says Lazzarini. “While the project already had fantastic glazed surfaces, we experimented with doubling the perceived height by inserting mirrors in the ceiling and along the window frames. The effect was even better than we thought because the reflections also brought the water closer, almost as if it were inside.”

It’s not the only area where they played with reflections. The owner’s cabin is a diaphanous space with the cool gleam of a grey pearl. With a daybed and a study area starboard, the suite has floor-to-ceiling glass doors to port that open on to a fixed balcony. “I think we’re seeing a comeback of more simple constructions,” says Rossi. “The novelty of the [fold-down] balcony has worn off and owners are tired of having to call in crew [to operate it] when they want a breath of fresh air. This way the balcony and the view are always there, you don’t have some strange piece of teak decking on your cabin wall and you can enjoy your privacy.”

“We wanted a look that was uniformly elegant, where the rapport with the surrounding natural elements would be simple and direct”

Air, wind, water and sand – these themes are picked up in the lit-from-above lobby where reflective and transparent surfaces make the stairs seem to float. A beautiful surface that looks like ripples of water on silvery sand turns out to be hand-painted wallpaper.

In the guest cabins the owner’s wife wanted something special that would continue the yacht’s theme of contact with nature and the elements. Since weight considerations were important, LPA again chose paper over other materials. “We suggested the French papier peint makers de Gournay, but when we didn’t find just what we were looking for in their catalogue we asked for a custom decor. We proposed variations on a cloud theme and are very happy with the different moods they created,” says Lazzarini.

Because of Flying Dagger’s projected use as a dayboat, outdoor spaces were important. The foredeck has a huge, almost communal sunpad built low into the structure so that it doesn’t ruin the yacht’s lines or block visibility from the bridge. Another large sunpad with a convertible table on the sundeck means that this space can be used both for sunbathing and al fresco dining.

But even when the day on the water is over, Flying Dagger is neither out of sight nor out of mind. “The owners have homes with sea views in several prime Mediterranean spots,” says Gobbi. “One of their requests was for special exterior lighting so that they could recognise their yacht at anchor. These are very classy people, so we mounted subtle LED lights so that you can pick out the yacht’s most significant exterior curves.”

While it may be nice to point to the most beautiful yacht in a bay and say “That one’s mine,” it seems more than likely that after the owners experience the light, space, speed and stability aboard Flying Dagger they’ll be using it for much more than quick spins.