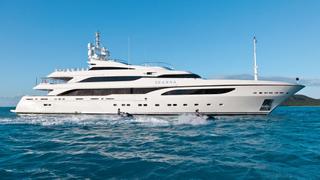 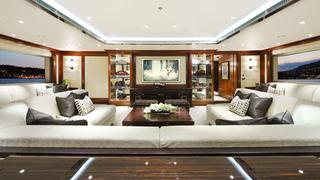 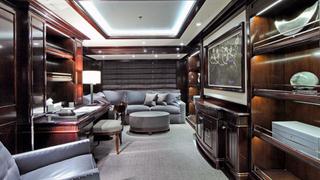 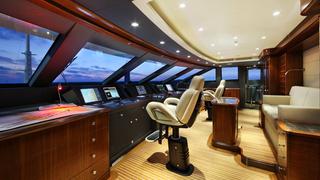 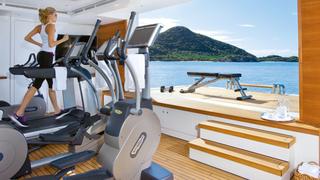 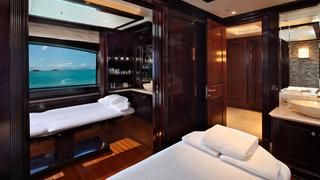 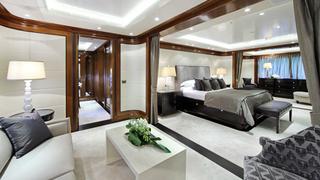 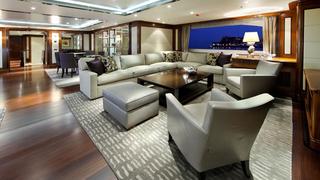 Often, when evaluating a new yacht, it’s best to start with the owners’ last yacht. So in preparation for viewing 65 metre Seanna, I checked out our files on their previous yacht, 55 metre Altitude, ex-Amnesia, also a Benetti. As it turns out, that’s almost where the similarities ended.

Although just 10 metres longer than Altitude, Seanna is almost double the volume, much of that courtesy of two extra metres of beam (she also has an enclosed area on her topmost deck). The owners were originally indifferent to the idea of charter for Seanna and so the interior is designed for their family tastes. Even after the family decided to offer Seanna for selective charter, the décor and fabrics, chosen by Susan Young Interiors of Seattle, Washington, remained unchanged.

‘The owners began talking to us in 2008 before they signed the contract with Benetti,’ says Tony Dixon of Redman Whiteley Dixon, who led the interior design on this build. ‘One of the first things they shared with us and the yard was that they didn’t want a formal dining room; they considered it a colossal waste of space.’

After substantial charter experience and buying Amnesia in 2007, the owners had a clear picture of how they live aboard and the features they wanted to enhance – or avoid.

‘When the owners looked at the proposed layout and the plans for a 64.5 metre Benetti called Silver Angel that launched in 2009 they said it needed a cinema and some snug spaces,’ says Dixon. ‘They virtually never used the dining room on their previous boat, so we began to reapportion the main and upper decks.’

Because the aft part of the main deck can lack privacy in marinas, Redman Whiteley Dixon seized on this as the perfect place for the cinema, where the focus is inside. The dimensions of the room and its custom C-shaped centreline sofa were optimised for the 100-inch screen and its projector. The sheer curtains and the blackout curtains as well as the lights, projector, audio and screen controls are accessed via an iPad; virtually everything in the owner’s and guest accommodation runs on the 13 iPads aboard, says Blaylock.

Forward, rather than the unused dining room, Redman Whiteley Dixon divided the space on centreline. Now, pocket doors establish a library with gas fireplace and dark marble surround on the port side. Where the air trunks for the engines below might have been an imposition in a dining room, disguised with deep walnut cabinetry, they wrap a seating area here under a picture window. Pale gray chairs and a deep charcoal velvet sofa under a white tray ceiling and dark wood joinery establish the colour palette for much of the yacht. The effect is chic, relaxed and slightly masculine, with a CR Mackintosh-style contrast.

Opposite the library is a space that serves as a wide hallway with a circular table at its centre. This is, however, the indoor dining space and the table expands into an oval with room to seat at least 10 under a chandelier of glass and linked nickel ovals. ‘In reality, it’s where the owner and his son spread out papers and have conference calls,’ says Dixon. ‘They prefer to eat outdoors.’

The dining room chandelier is scant preparation for the grand entrance hall and foyer to come, although the same linked nickel ovals dominate the balustrade of the massive central staircase. ‘Originally, the staircase was tight and dark and awful. When they decided to step up to a larger boat, it wasn’t so they could have bigger cabins – although they certainly got them – it was so they could have more features,’ says Dixon. A spacious circulation area and wide foyer was one of those features.

‘The first thing was to convince the yard to cut chunks of aluminium out to give the stairs more light,’ says Dixon. ‘We created a full-size mock-up of the stairs and the balcony above to make sure it was right. We had to do the mock-up to make sure all of the nickel hoops were correct for scale; none of them are exactly the same size.’

Opposite the stairs, a graceful pair of doors with etched, frosted glass in a walnut frame slide out of pockets to cover the industrial starboard side doors. These doors add grace to the interior and admit plenty of light. Charcoal, taupe and white marble establishes a linear pattern on the sole and white marble continues up the stairs as treads.

To soften the gloss wood, nickel and marble, RWD upholstered the walls of the stair column, and indeed much of the boat, with horizontal bands of Edelman leather tucked into multi-level frames. While these frames establish the geometry of the rooms and spaces, they are not raised and fielded panels. The design features a framed border, then a narrow reveal to a darker surface below around a centre panel. The borders are all straight grain timbers while the centre panels are various decorative grains, leather, or in the case of the massage suite, glass mosaic tile. There are repeated elements of glass prism dentils in soffits and cabinet fluting; it’s a traditional look with a contemporary spin. Everywhere, the deep windowsills are wrapped in smooth leather, pearlised to soften the look.

Apart from the dining room, the biggest departure is the owners’ area, which again is feature packed. On Silver Angel, the area forward of the foyer was a gym. Dixon noted that while _Seanna’s_ gym moved around a bit during design, before ending up forward of the lazarette with a shell door opening to the sea, it was never going to be between the master and the stairway.

‘The forward part of the main deck is a large area, perhaps overly so and we knew we could get a lot of uses out of it,’ says Dixon. They moved the hall to the master suite back on centreline and thereby end a line of sight from the ‘front door’ into the owner’s quarters. The concept was to create a private sitting room or office on port, with the space on starboard occupied by a massage room accessible from the foyer. Then, laughs Dixon, they all realised just how large that massage space was going to be. Now it’s a mini spa with two separate massage rooms connected by a pocket door for couples massages. ‘Massages are something they enjoy every day so it made sense to give this feature good space – and a big window,’ he says.

With his-and-hers bath/shower and dressing rooms forward, the resulting suite was an oddly shaped space of less length than beam. They ended up dividing it up into three spaces, each of which fell neatly into classical proportions. Then they curved the corners of the rooms architecturally to introduce cosiness. Given these modifications to the main deck, Dixon says, ‘We kind of think that this is how Benettis might be in the future.’

With the main deck full of cosy, special purpose spaces, the bridge deck is the heart of the boat when it comes to family living. Aft of the bridge, ship’s office and captain’s cabin is a VIP suite, then the hallway opens onto a large multifunction saloon with a lovely backlit glass bar by Peter David Studio in Seattle, a games area and two seating areas set at 90-degree angles. An enormous span of glass opens on a covered aft deck that seems to stretch far longer than the length of Seanna would allow. In part, it’s an illusion: the exterior staircases and built-ins are pushed outboard, so the view to the stern across the top of the huge dining table is unimpeded. Inside, the sole is satin-finished hardwood planks, echoing the teak deck beyond. Rugs and loose furniture chosen by Susan Young fill the space. Young also commissioned the artworks aboard – many by abstract landscape artist Jared Rue – to complement the fabrics and atmosphere. It’s also the spot where the owners’ collection of Chihuly glass is displayed.

‘If they aren’t in the gym or in the water, they are up here most of the day,’ says the captain. An oversized service pantry on port with a dumbwaiter and direct access from the galley below makes this the site of most meals. The service pantry also opens into the ship’s office and then the wheelhouse, which helps keep the watch fed during passages. The crew traffic patterns throughout the boat eliminate bottlenecks and lots of storage spaces keep things crew need for service or maintenance close at hand.

Seanna has one more surprise in store for her guests and that’s the sundeck and a raised observation deck. ‘On Silver Angel, Benetti discovered it could turn that space under the radar mast into a small room,’ says Dixon. ‘We totally exploited it. Instead of leaving the walls in white paint, we put up teak strips to give it a cabana feeling. It’s like a secret room.’ Aft, the deck is the domain of sun worshipers; forward it belongs to those in the hot tub or on the observation deck, but this glass enclosed eyrie is the ultimate spot to curl up with a book or, perhaps, an iPad…