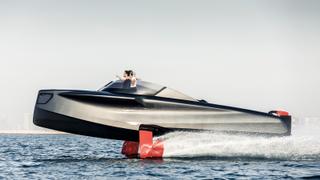 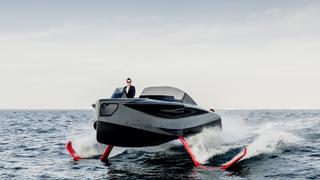 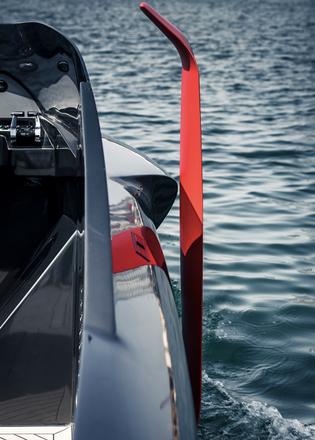 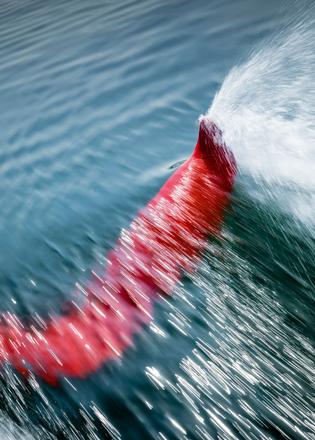 Smooth operator: Putting the new Foiler tender to the test

Usually on a sea trial of an open boat this size, there’s no point taking notes. The movement of the boat as it rides up and over the swell and associated spray mean anything written down exists in your notebook as a blur of lines, sodden zigzags and ripped pages. If you’ve got kids, then consider their penmanship at three. Now imagine they’ve spilled their juice all over the notebook, fought over it with a sibling and then given it to the dog. That’s usually what you’re left with.

If there’s any way I can prove to you that the ride of the Foiler is unnaturally smooth, then it’s the fact that I can actually read what I furiously scribbled during a sea trial of the 9.6 metre boat outside Port Rashid, Dubai. “Like riding on a cushion,” I jot down. “Perfect tender material.” I keep thinking about guests wanting to get ashore for dinner and a superyacht captain demurring because the swell is kicking up. The Foiler would mean everyone arrives at the quayside tucked and unruffled, whereas the same ride in a standard limo or open tender might have guests demanding a resignation.

But if foiling was going to go mainstream, surely it would have happened by now? When I put that to Sylvain Vieujot, founder and chairman of Enata, which makes the Foiler, he doesn’t hesitate. First, the foils on his boat are carbon fibre, which means they are supremely strong and can be finely shaped for maximum efficiency. In the past, foils have been metallic and have had rudimentary shapes – mainly a semi-submerged U or fully submerged T – and, being metallic, they required intensive maintenance.

Second, the craft carrying these metallic foils had very high take-off speeds, well beyond 20 knots, so there was a long and sometimes uncomfortable run-up to take-off and a limited band of foiling potential at the top end. Conversely, the Foiler is up on her twin carbon foils at 12 knots and has a 40 knot top speed, meaning almost immediate take-off and a wide band of foiling potential. And lastly, modern engines are smaller, more efficient, punchier and also quieter, so more suited to the concept.

It’s really a case of technology catching up with the physics, which Vieujot believes heralds a foiling revolution. If this was coming from a start-up you might put it down to marketing spin, but Enata is one of the leading composites manufacturers in the Middle East, working across aerospace, marine and architecture. Its work is diverse, from making foiling kitesurf boards that have been chosen for the Olympics to building the dome for the second largest mosque in Mecca, as well as unmanned aerial vehicles for militaries around the world.

In 2016 the company acquired Hydros, the Swiss company behind the foiling trimaran Hydroptère, which was the fastest sailing yacht in the world over a nautical mile from 2007 to 2012. Vieujot, himself a sailor who almost competed for France at the Olympics, bought the company with the ambition to build a boat that would change everything. And here I am driving it.

The first thing to note about the Foiler isn’t its performance, or efficiency, it’s the fact that it looks good. The styling and naval architecture were done in-house by Enata. “If you try and collaborate with established naval architects, they tend to be conservative,” says Vieujot. “They want to do what they’ve done previously. We even had to push our internal team.” The finished article took around eight years to hit the water – from concept design to construction – and it is a truly distinctive boat, with an upright stem and pronounced “cheeks” in the topsides, which act as spray deflectors and protect the foils when they’re retracted alongside. Inside, there’s seating around the central engine hatch and a pair of lounge-type chairs right in the nose.

This first hull features a pair of 320hp BMW engines, but Vieujot says he is revisiting this for future hulls. The engines are linked to electric motors that power a pair of props mounted on little torpedoes at the end of each retractable rudder. The motors can also charge a battery bank, so at low speed the Foiler can operate in silence on battery power alone. A power management system (“It’s the same software as the McLaren F1”) constantly monitors output and combines battery and diesel engines at the top end to produce the Foiler’s maximum speed. Sadly, on our test day one of the engines is misbehaving, but even on one engine and using the battery we still get up at 12 knots, are flying fully at 18 and cruising at around 20 knots. Outside the port in the wide-open sea, wave heights are around a metre and I instinctively brace as we take on the first roller, but instead of a sharp pitch and a face full of spray all I get is a gentle wallow as the wave passes beneath us. It’s the same experience in beam and following seas – none of the usual rules apply.

Even if I can’t experience top speed, I still get plenty of neck-snapping G-force in the turns. The handling is so immediate and precise that it’s shocking the first time you swing the wheel. There is no heel and zero slip. It’s just a flat, fast turn that makes you appreciate the helm’s bucket seat. The loads this puts on the foils are immense. “Sometimes the whole static and dynamic weight of the boat is on one foil,” says Vieujot, so they’re necessarily very, very strong – as is the structure around them. Fibre optics throughout the foils feedback real-time stress information to the helm, and the system will release them a little if set parameters are breached. So far, there have been no dramas. On one sea trial they hit a wooden crate, which the carbon fibre foils just exploded. Picking up plastic bags at low speed is a pain, says Vieujot, but hitting them at top speed pops them. If the worst does happen and a foil snaps, they’re boxed in a watertight compartment, so no water should be shipped.

Vieujot is eyeing the superyacht tender market. With the foils and rudders folded, the Foiler slims right down – just 2.3 metres high, by 3.3 metres wide and 10 metres long, so ideal for the garages of larger yachts. As for price, it’s €990,000 for a Foiler delivered to Dubai. Enata says it will build you one in 12 months, but that’s factoring in a bit of wiggle room while they get production going. A few extras are under development, like a hardtop with solar capacity to trickle charge the batteries, and even a joystick on the forward lounge seats. He’s also planning to modify the foils and increase engine power on the production model for an even better ride, if that’s possible. But the big news is he thinks he can apply his technology to boats much bigger than the Foiler. “Thirty metres?” I suggest. “We can go bigger than that. Easy,” Vieujot shoots back. It’ll be even easier taking notes on that one.

This article first appeared in the August 2018 edition of Boat International.