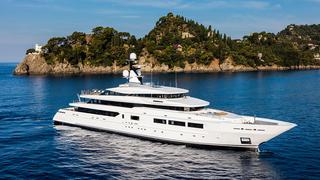 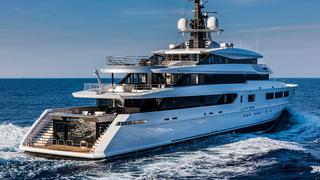 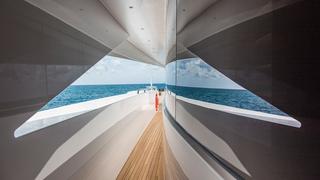 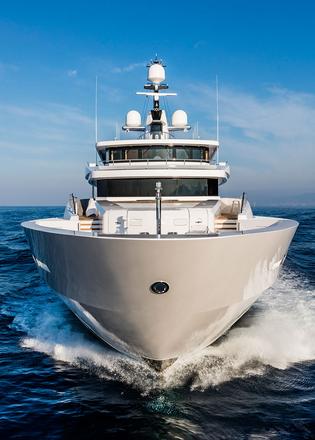 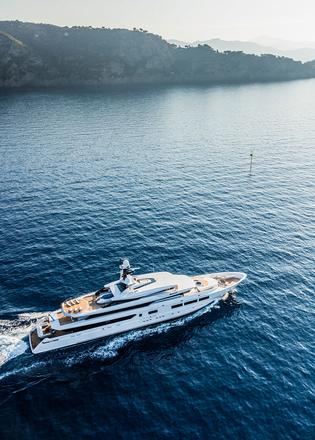 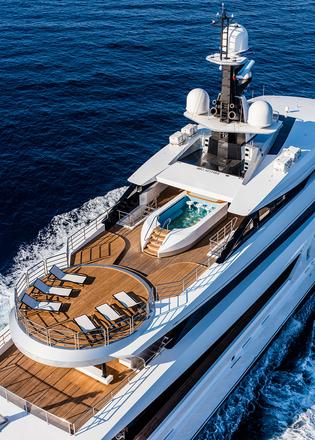 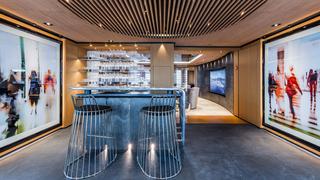 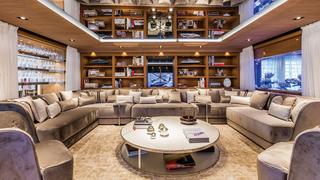 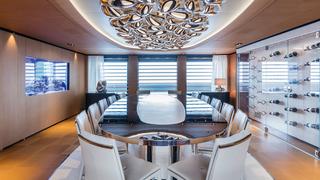 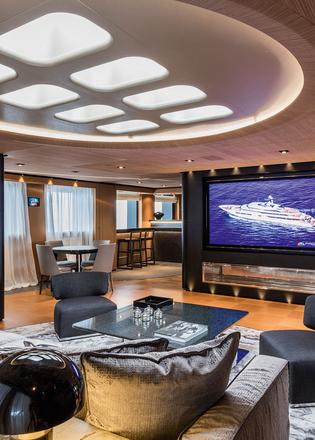 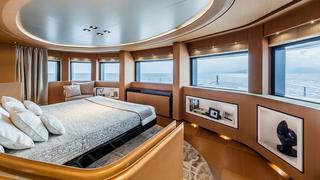 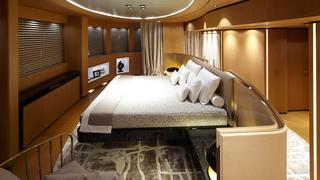 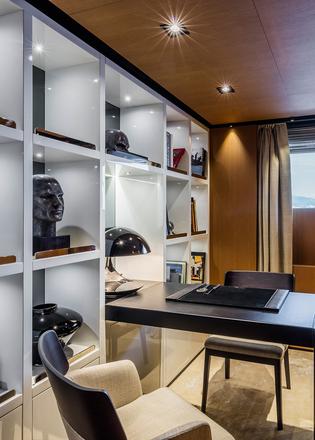 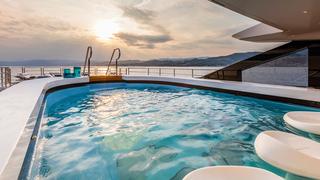 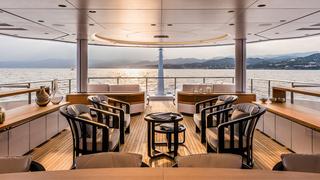 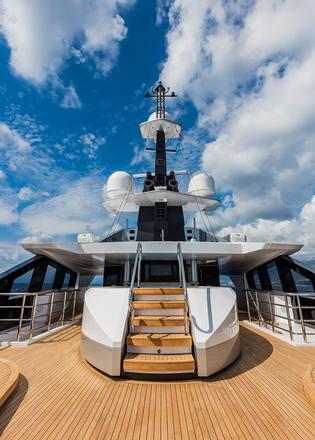 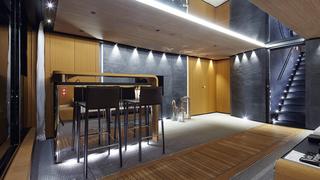 It’s hard to get your bearings on a part-built superyacht, picking your way over steel bones while welding torches fizz like fireworks through soon-to-be portholes. But on 69.3 metre Suerte the confusion stems from more than just a monotony of girders and the effort of not stepping into anything deep, on to anything pointy or through anything frighteningly expensive.

“On top, up there, we have one extra sunbathing area, very private, which is reached by elevator from the gym,” says Suerte’s build captain Renzo Chelazzi, waving his hand towards a small bird sitting on the mast.

Down on the main deck he introduces a huge lobby with the rudiments of an unorthodox central staircase down to the beach club. As the grand potential of this space assembles itself in the imagination he is already standing down on the stern platform, gesturing into the beach club.

“The sauna, it has a window that looks out onto the sea,” he says. These aren’t common superyacht features. In fact, in her uncompleted state, Suerte feels disorientingly unfamiliar. But on the completed boat at the 2015 Monaco Yacht Show a few months later, with uncertainties resolved into a treasure trove of unexpected delights, the questions are about how this unusual boat came to be.

Suerte has an elegant, modern exterior, which the designer describes as "a combination of curved and clear lines" defined with silver-grey and black

The explanation lies partly at the yard. In 2004 Guido Orsi sold the sporty motor yacht brand Baglietto after a decade in charge. In 2008 he returned to the trade, but moved up considerably in size: the first boat from his new Tankoa yard in Genoa would be 60 metres-plus.

With Baglietto’s top management and entrepreneurs on-side, plus a prime waterfront plot in Genoa, right next to the international airport, the young yard had a distinctive aim. “This, for us, is very important: to have a custom product made in Italy, but with Northern European quality,” says Edoardo Ratto, general manager at Tankoa.

Many of the yard’s workers have years of experience working at Baglietto, but others were hand-picked from yards further north, with specialisms in a variety of areas. A client signed on for the first build and Francesco Paszkowski worked up a design, but the global financial crisis hit and the client put it on hold.

Thanks to intelligent investment in its early years, the yard’s finances remained healthy and in 2014 a new owner bought the project. He asked Paszkowski to refresh the design – in particular the beach club, which has gained four metres and an incline.

Suerte has an elegant, modern exterior, with what Paszkowski describes as “an accurate combination of curved and clear lines” defined with flashes of silver-grey and black. Paszkowski collaborated with interior designer Margherita Casprini on a “cosy and contemporary” atmosphere for the interior of Suerte.

The yard’s first build would inevitably be its calling card, so Suerte is an embodiment of its ethos. “The technical specification is the best in the world: the rudders are Rolls-Royce, the engines are Caterpillar, the generators Northern Lights,” says Ratto. In other words, brands you might find on a Northern European superyacht.

For acoustics and vibration it went to Dutch specialist Intersona – the interiors are “floating” and the superstructure is coated with an acoustic absorber – while for piping the yard chose Oceni, which builds for Fincantieri and Picchiotti.

It is telling that the yard seems as proud of Suerte’s massive, orderly engine room and even her navy-certified wiring, as of her decorative finishes. Redundancy is a running theme here.

For communication, the captain of Suerte insisted on a Venktron public address system, the kind used on passenger ships. “The telephones in the guest cabins become the speakers from the bridge,” he says. “I can push a button and talk to everybody around the boat – it is important for safety reasons, or if you want to inform the passengers regarding an arrival time or some special area you are passing.”

On the wing stations the same system is set up on a crew-only loop and hands-free, so the captain can concentrate on the levers for the engine, bowthruster and rudder. “Otherwise he must be an octopus,” says Chelazzi with a smile.

Indeed, maintenance and usability have been carefully considered on Suerte. The yard built the stern and beach club in stainless steel for low maintenance. At the other end of the spectrum, the Ferraro Arredamenti-designed ceiling panels on the aft deck overheads are easily replaceable if damaged and fastened to the ceiling structure for extra safety.

There are even water points everywhere so that crew can hose down decks without snaking hoses half-way around the boat.

The ambition to be a boutique, custom yard is visible in unusual design decisions. Whether guests alight by tender at the spa-like beach club – rather a tempting foretaste for weary travellers – and saunter up the glamorous central staircase, or arrive by passerelle a level above, the main deck lobby is the space that welcomes them with its glamorous bar.

It’s unusual to dedicate such a chunk of space to an entrance hall. “It’s very different from any other boat we designed so far,” says Paszkowski. “You actually step on board through lateral sliding doors instead of sliding doors from the aft deck.”

This quirk freed up the aft of the lobby to become what he likens to “a winter garden surrounded by glass walls”. With wafty white curtains and low sofas, it elevates the lobby into light-flooded private lounge. Books by day, cocktails by night.

Forward from here, rather than a formal saloon, there’s a TV room on Suerte with an 80-inch curved screen – and no windows. This is a creative solution: ventilation ducts from the engine room run up through the wall here, precluding ports.

“So it appeared to be the best area to place the TV room – combining a technical issue with an owner’s request,” says Paszkowski. “You can close sliding doors from the lobby and from the dining, to make the area darker.”

The décor here is soft and comfortable, with rounded furniture, plump upholstery, silky carpets and velvets in taupe and pale gold.

The TV room on Suerte is separated from the glossy dining saloon by a large fish tank. The upper saloon is multi-purpose and also well lit, thanks to the skylights in the bottom of the pool

Partially separated from the TV room by a massive fish tank, the dining saloon focuses the attention on two artworks designed by Paszkowski’s studio, one a ceiling sculpture of mercury-like blobs that reflect light from the surrounding recess and reflections from the table below; the other a wine cooler that displays the vintages on offer in the cellar.

Forward on this deck are the four guest cabins with Carrara marble en suites and the full-beam VIP – chic and masculine in black leather, lacquer and warm woods.

On the upper deck of _Suerte, _the designer and yard created another unusual space. To protect the beach club, fumes are channelled up a smokestack that reaches from the engine room to the mast – through the middle of the upper saloon.

Paszkowski made this division a useful one, with sliding partitions that can sequester the space from the single open-plan into two or three parts depending on the occasion: these comprise a sushi bar to port, a saloon-cum-cabin to starboard – the sofa transforms into a bed and an adjoining head becomes an en suite – and a seriously glamorous sitting room aft.

Here light refracts through skylights in the bottom of the pool above onto the grey velvet sofa and dappled silk carpet. Even that inconvenient smokestack looks part of a plan, clad in black leather and chalky Jerusalem stone.

The owner’s cabin is forward on this deck, with an office, dressing room and massive bathroom. “Privacy is ensured in the office by rotating foils inside the glass wall,” says Paszkowski. “The bed with a leather bedhead is centre stage and its raised position enables a striking outside view.”

The owner’s spa pool forward is surrounded by sunpads and shielded from the foredeck proper, slightly lower down, by artfully placed awnings. It’s a short stroll aft from the suite to the central lift (within the mast to avoid affecting the yacht’s line) where he can either go down to the main deck, up one level to the gym, or up one more level to that ultra-private sunbathing area – a couple of sunpads and a little decking perched on the hardtop.

This is one of several excellent exterior decks on _Suerte _but the wheelhouse deck – more than a third of the boat’s length – boasts the lion’s share of treats. The 8,000-litre heated pool has a waterfall and a bar, while aft the touch-and-go helipad is surrounded by sunpads for daytime lounging.

In the evening, fold up the helipad’s rails, set up a DJ at the bar, turn on built-in lights and you have a disco. When serious volume is called for: “We have extra speakers to the ones installed in the bulwarks,” says Chelazzi. For more sedate parties, the upper aft deck offers alfresco dining for 12 to 14 and comfortable seating.

The 8,000 litre heated pool has a waterfall and a bar, while the upper deck aft offers comfortable alfresco dining

For crew, things have been well thought-out on Suerte: routing means they never have to pass through a guest area and the galley has every conceivable oven, plus a blast chiller for sushi prep and mini refrigerated drawers for frequently used ingredients.

Up on the wheelhouse deck, crew stuff used towels into a dumb waiter that takes them down to the tank deck laundry. There are two large, adjoined messes and each lower deck crew cabin has its own TV and en suite, while the captain’s cabin is aft of the wheelhouse, with its own office.

A foredeck hatch houses three or four jet skis – the owner’s son is a big fan – while two tenders are stored in a side-opening garage. This, of course, frees-up the stern for that spectacular beach club, arguably the yacht’s greatest charm.

In good weather it offers ample lounging out on the stern platform or fold-down terraces to port and starboard. In bad weather, sliding glass doors enclose it and there is still plenty of space to relax inside on low sofas, as well as the sauna and hammam to warm up in. And the central stairs on _Suerte _make a big difference.

Many beach clubs, connected to the rest of their boats by exterior staircases or pokey, warren-like steps inside, feel like faintly utilitarian add-ons. This feels central to the design, a starting point rather than an afterthought, and it enriches the overall lifestyle on board.

Low-lit under slate walls and trimmed with smooth carpet, it is described by Paszkowski as “a world apart, separated but strictly connected with the main deck and the sea”. Lying on a massage table here, with the waves bumping gently against the hull, you might well forget where you are.

All pictures courtesy of Alberto Cocchi