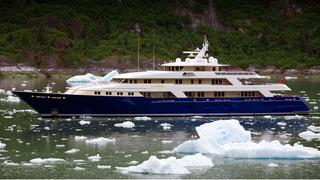 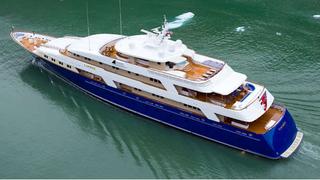 Built under conditions of secrecy for experienced owners, the 73.1m Delta Laurel held a notable number of superlatives at her launch in 2006, among them the fact that she was the largest yacht built in the US in 75 years. She was also the first yacht of her size to feature an entirely composite superstructure from the main deck up. Today, after being shielded from the public eye for nearly six years, one additional superlative surfaces:Laurel is one of the most functional and well-designed large yachts on the water.

Six years ago, Delta Marine Industries quietly delivered the superlative superyacht to her owners, and without fanfare she disappeared over the horizon, embarking on a trek that would take her owners and her loyal crew on a 120,000 nautical mile adventure to exotic ports of call around the globe. During this time she remained shrouded in secrecy, completely off limits to visitors, wishful charter guests and certainly the superyacht press.

Laurel was the vision of experienced yacht owners who selected Delta when they were ready to move up from their 50m Feadship. Surrounded by the expertise of their build captain, project manager and engineering consultancy team, the owners met with the Delta Design Group to discuss what would become Americas largest-and most functional-yacht

As is common with many custom builds, Laurel grew in length as her owners’ wish list expanded. In the early stages she was envisioned at 60m but quickly grew to 67m and then to 69.5m in order to carry her three custom-designed Nautica tenders. At 69.5m, however, her profile, drawn by Donald Starkey, now looked disproportionate to the owner, so he asked for her bow to be extended to improve her rake and sheerline. Adding a swim platform on her stern increased her by another four feet, bringing her to her final length of 73.1m.

This progressive length increase had some not-so-obvious, but quite significant, add-on effects: it increased the boat’s draft to 3.7m, which allowed for an efficiently designed tank deck. This deck now serves as the epicentre of a precisely managed yacht.

Captain David Clarke ran the owners’ Feadship and acted as Laurel’s build captain. ‘We followed two philosophies during the build,’ he says. ‘The first was that equipment was to be in either of only two places: where is it being used or where it is being stored. The second rule was that anything greater than one cubic foot needed to incorporate storage of some type.’