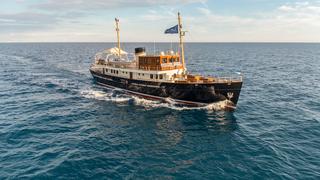 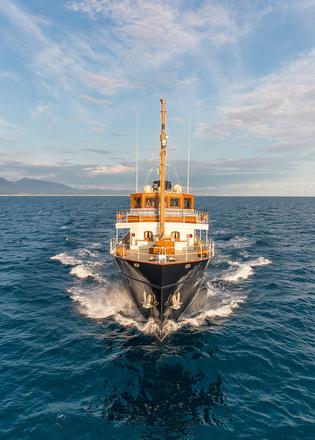 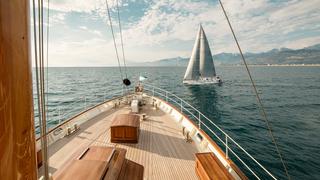 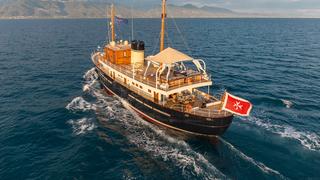 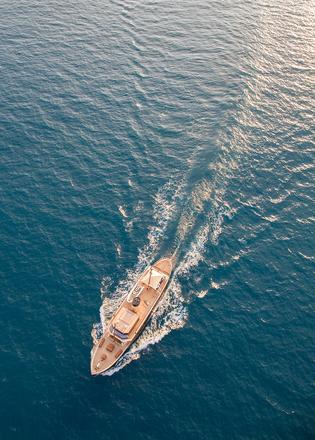 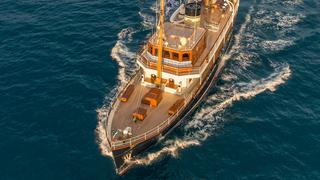 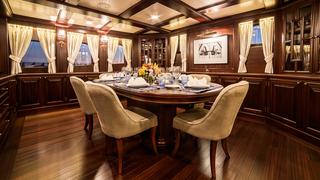 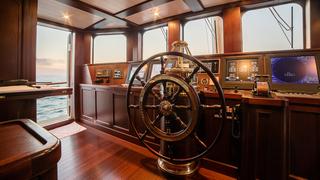 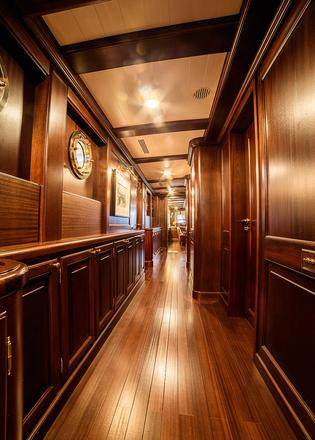 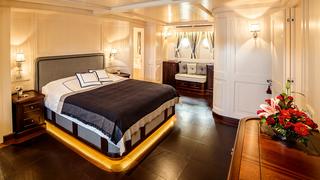 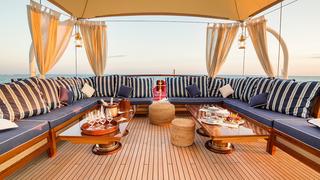 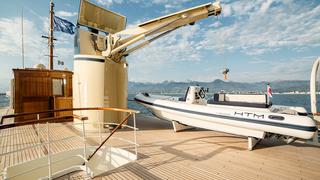 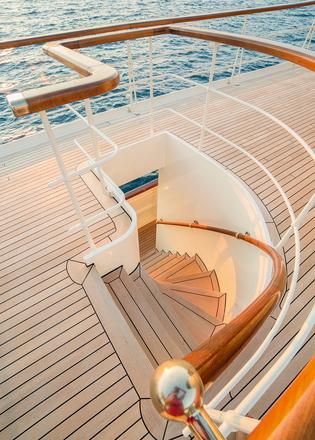 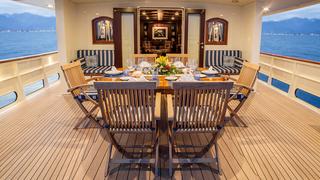 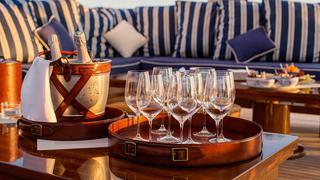 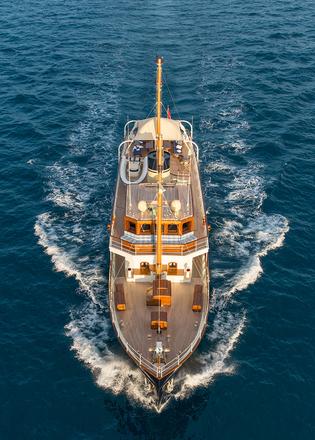 The 1930s inspired superyacht Taransay is an instant classic

Could this be a new trend in superyachting? The 40 metre Taransay from Rossinavi may look like a 1930s boat – but rather than go to the trouble and expense of restoring a crumbling oldie, the owner built one from scratch: a brand new, but utterly traditional and beautiful modern classic yacht.

*Why build a modern classic? *

Why would anyone choose to build a 1930s-style yacht today? I can’t get that question out of my head as the newly built 40 metre Taransay hangs above me in a travel lift at the Rossinavi shipyard in Viareggio, ready for launch. The style absolutely demands small, limiting windows, a relatively low volume compared to modern, similarly sized platforms and the added challenge of hiding today’s complicated systems in a classic-looking package.

A few months later, in Venice, I’m on board the boat for the first time and Taransay’s captain, Marco Santoro, is giving me the answer, shortly before leaving on the yacht’s maiden voyage with the owner and his family.

“I was involved in the project from the beginning, while I was still captain on board Ocean Glory (ex-Destiny), a gentleman’s motor yacht designed by GL Watson & Co and launched in Scotland in 1935,” begins Santoro. “After an adventurous life, Destiny arrived in dire condition in Genoa, where she underwent a full refit at Amico & Co yard. The yacht was presented as Ocean Glory in all her splendour at the Monaco Yacht Show in 2007.”

She was made available for charter and immediately caught the attention of Taransay’s owner. He ended up chartering her for a number of years in a row and was seduced enough by the idea of owning a classic himself that he investigated buying one to refit.

I realised that I would love to own some kind of classic yacht, so I could have the opportunity to travel in style rather than at top speed

“Chartering Ocean Glory, I realised that I would love to own some kind of classic yacht, so I could have the opportunity to travel in style rather than at top speed,” the owner says. In 2012, while enjoying his annual cruise in the Med aboard Ocean Glory, he chanced upon a beautiful modern replica of a classic sailing yacht built by Royal Huisman. That was a turning point: the realisation that building his own replica from scratch would allow for a made-to-measure classic yacht, without the constraints and unforeseen problems that come with a refit project.

One thing was established from the outset: his new boat’s style should be inspired by the gentleman’s yachts designed by GL Watson & Co, a company that, in the early 20th century, produced icon after icon. Madiz, Blue Bird, Nahlin, King Edward VII’s Royal Yacht Britannia – all penned by the company’s founder, George Lennox Watson, or by its design studio. Today it is run by William Collier, an entrepreneur with a PhD in yachting history, who works with owners restoring classics such as _Malahne _and designing new ones inspired by former projects.

Once the decision to build a replica was taken, Rossinavi was entrusted with the project. It was a tricky proposition from the outset: there was no platform or pre-existing project to draw on, so the team, comprising the owner, Santoro and Rossinavi’s technical department, had to rely on old photographs for inspiration and information. The most difficult task, though, was to stay faithful to the shape of a yacht from the 1930s, while still giving it all the comfort, volume and amenities of a contemporary vessel. As the owner said: “A project like this turns the clock back and forward at the same time.”

The team settled on a size of 39.3 metres, a displacement hull and a canoe stern and high bow to eke the most volume out of her length. The steel hull and aluminium superstructure house an interior styled by French designer Alain Tassin, who came with a wealth of experience, having worked on the refit of Ocean Glory. “We have tried to recreate a gentleman’s yacht atmosphere,” Tassin says. “The owner had his own requests for the yacht’s layout and overall feel and we worked in close collaboration to give Taransay the right ambiance and liveability.”

By studying the layout and features of a number of classics that had been refitted, Alain Tassin was able to create a tasteful period interior with plenty of teak, exposed deck beams and simple white panelling. He resisted the temptation to over-embellish the décor, so the final effect is elegant and homely, rather than grating pastiche. “The main deck welcomes guests in a quite austere setting, while in all cabins we used a delicate white satin lacquer to enhance the open-pore grain of the ash wood panelling,” Tassin explains. “This also means that the cabins on the lower deck seem light and airy despite the small portholes. The use in the cabins, stairs and lobbies of dark-brown leather floor tiles is a modern touch – they will develop a warm patina with age.”

Entered through double glass doors, the main saloon is an intimate retreat entirely clad in satin-lacquered mahogany, although not much natural light makes it through the row of small, shapely windows that stand in stark contrast to the massive glazing panels we’re used to seeing today. The galley, forward of the saloon, is one area where the past hasn’t penetrated; it’s laid out thoughtfully and equipped with all the details and appliances you’d expect on a modern yacht. Custom-made fridges and a wine cellar complete the professional feel of this large, bright space. From here, stairs lead up to the wheelhouse in its sturdy deckhouse, where the past and present mingle: contemporary instruments and screens sit alongside a traditional teak steering wheel and a replica of a classic wood and brass binnacle.

The period perfect interior of Taransay

Taransay has an unusual lower deck arrangement, with the amidships engine room splitting the accommodation. Two guest cabins sit forward of the machinery space, while the owner and more guests sleep aft of it. The owner’s quarters use the beam to its maximum advantage, stretching across almost the widest part of the boat. A twin guest cabin sits behind it, and then a very traditional touch: a guest cabin in the stern with V-berths in a space easily big enough for a double bed. The overall feeling down here is of space and relaxation – a huge advantage of building a “new classic” instead of working with a layout from the past – and all cabins benefit from plentiful storage and en suite bathrooms, with finely moulded marble countertops and marble-lined shower stalls.

The quarters forward of the engine room comprise the VIP double and another twin cabin, both accessed via dedicated stairs off the dining room. Large and comfortable crew quarters for six are on the lower deck forward, while the yacht’s captain has his own double cabin abaft the wheelhouse.

Nothing feels fake about the yacht’s interior and this sense of authenticity carries over on to the decks. Hatches boasting brass handles and hinges have been placed on the forward deck and all over the yacht finely executed fixtures and fittings hark back to the 1930s. All involved, from Rossinavi to the owner, worked hard to fit out Taransay with period details. “Our aim was to recreate the feel and style the owner loved so much on board Ocean Glory and Rossinavi has been very willing to cooperate and listen to our requests, even the most unusual ones. I’d be glad to build another hundred yachts with them!” declares Santoro.

The upper deck of Taransay

The upper deck, once free of the tenders, provides a vast area of relaxation at anchor. Facing L-shaped sofas provide the seating up here and can turn into a wonderful al fresco dining area thanks to adjustable-height tables. The faux funnel towering above the deck hides a small bar with fridge and freezer and an ingenious foldable crane to launch and haul out the tenders.

Perhaps the ultimate lounging space is atop the wheelhouse: sunpads accessed via a ladder. In keeping with the GL Watson style, there are full walk around decks on both the main and upper levels for an evening stroll, but they don’t seem to pinch too much volume from inside thanks to a beam of 7.6 metres.

The upper deck of Taransay

The canoe stern prohibits a bathing platform or any modern flourishes like a beach club, but a folding boarding platform on the starboard side is a very good second-best. It was designed to fold down low to the waterline to make for easy entry and exit to and from the sea, so is an ideal dive platform and makes access to the yacht a breeze from the HTM Custom Tender. It’s while out circling the boat on this RIB that the yacht really shines. Her blue paintwork is buffed to dark blue perfection, reflecting the glinting waters of the northern Adriatic. Getting a finish like this on a refit project is notoriously difficult, with old steel and rivets upsetting the eye line. Here, though, there’s no such problem.

The classic exterior of Taransay

“To get what I wanted from a refit project would have required a gamble – you never know what you’re going to find beneath the surface. By building my very own classic from the ground-up, I have managed to get the best of both worlds. Taransay has all the old-world charm I could ever want in a boat, but I was also given total control of her destiny thanks to starting new and there were no nasty surprises. She also has every convenience of a modern yacht, and the comfort and spaces to rival any other 40 metre,” says the owner, neatly answering my initial question of why anyone would want to build a modern classic.