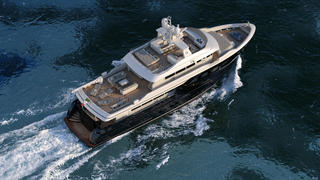 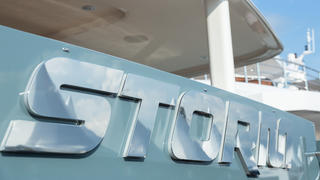 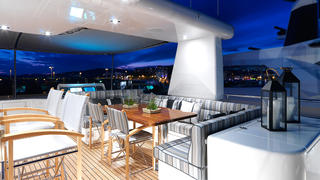 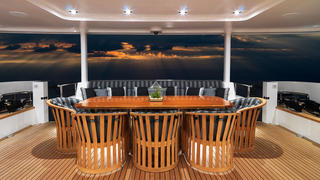 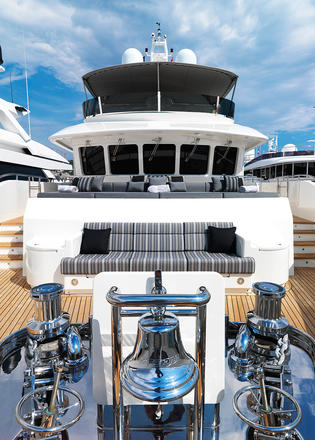 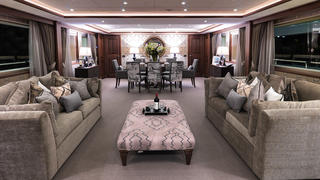 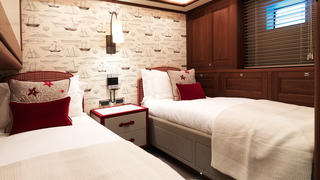 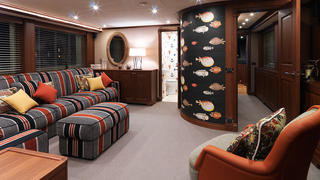 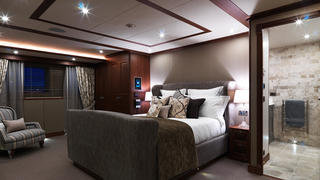 There is a groundswell and the wind is blowing 27 to 30 knots right over the bow, but it feels like she is running on a millpond. At 10 knots, barely any spray breaches the rails. With a fine entry at the bow, Storm doesn’t pitch. The hull shape is designed to cut through the waves and give a smooth ride.

High in the bridge, all feels secure and calm. It’s exactly how you would want to feel on a yacht that’s built to explore great distances and stay away from shore as long as possible, all with the family in tow.

A relatively young yard on the Italian yachting scene, Cantiere delle Marche (CdM) has made a name for itself in dependable, competitively priced explorer yachts, launching 10 vessels since its inception in 2010. CdM’s Darwin Class – with 86, 102 and now 107 versions – is its original rugged explorer range, all high bulwarks and huge volumes, that features naval architecture and exterior design by Hydro Tec. Its stylish Nauta Air series lays a superyacht skin penned by Mario Pedol over sturdy explorer yacht bones.

“An explorer yacht isn’t about the shape, it’s about the reliability,” says Vasco Buonpensiere, CdM’s sales and marketing director. “But if you build an explorer dressed like a superyacht, you can do everything.”

Outfitted in a grey hull befitting her name, Storm is CdM’s largest yacht to launch yet at 32.7 metres (though larger Nauta Airs aren’t far behind). It’s an evolutionary tipping point that’s indicative of how far the builder has come since its first Darwin 86 splashed down five years ago.

It was a shared passion for reliability that attracted the owner of Storm to CdM, but it was the yard’s ability to rise to the owner’s challenges and prove its capacity for growth that made this build something truly special. The experienced northern European owner and his trusted captain, who had already worked together on two new builds, were clear about their main goals: reliability, simplicity and redundancy.

“I asked for a very seaworthy and comfortable vessel,” says Storm’s owner, “a vessel with which I could cruise in any weather conditions and on which I would feel safe, even when other vessels wouldn’t even think of being out there. Also, we asked to conceive it purely as a family boat.

“Beyond this, we were very demanding on all aspects of the build and requested many specific features. I know this set new challenges for the yard but not once did they say it wasn’t possible. An experienced owner and captain can create their vision only with a builder who will genuinely listen and then implement those requests.”

Not merely an extension of the Darwin 102, Storm is built on a new platform, with a wider beam of 7.7 metres, higher ceilings, enhanced sound insulation (an area where CdM already excelled) and myriad customisations demanded by the owner, from clever child-safety solutions to the roomiest galley seen on a CdM or most other yachts in her class.

A growing family and the desire to cruise longer distances prompted Storm’s owner to step up in size to 32.7 metres. But he still wanted the ability to tuck into shallow bays – the owner is known to run ahead on the tender and scope out places to drop the hook – and have a small crew.

“I would not build larger than a crew of four could look after,” he says. The size of the galley is telling as to how the yacht will be used. “It’s important because this is a floating restaurant,” says Storm’s chef. The 17 square metre galley has a separate station for the stew to prepare drinks and snacks.

Eating most meals on board, staying away from shore and anchoring out is this owner’s preference. Storm isn’t a yacht for loud parties and flashy events quayside, but one designed for relaxed exploration, cruising year-round with select friends and family, including very young children.

A yacht isn’t naturally a toddler-friendly venue – there are plenty of stairs to fall down, technical spaces to get mixed up in and, of course, the looming sea below – but Storm is as baby-proofed as they come, though imperceptibly so.

A gate hidden in the bulwarks folds out to prevent fleet-footed toddlers from running forward unattended, “kiddie netting” can be placed around the guardrails to prevent any child-overboard incidents and the Pullman berths in the guest cabins are designed to prevent falling out of bed. There is also a mini bathtub in one of the double cabins, so bath-time routines from home can be maintained even when exploring far and wide.

Creating a family home at sea dictated every part of Storm’s design, functionally and aesthetically. The interior styling, by PFA Design, had to be suitable for all seasons and weather because the yacht will be used year-round, rain or shine. Beach house chic wouldn’t do. The owner’s wife and daughter managed the interior décor, which gives the sensation of a relaxed country manor house, with details in tartans and checks, muted greys and beiges, splashes of colour in the wallpaper and nautical accents. It’s unexpectedly relaxing and calming.

The windows in the main saloon, which are lined in leather trim, are purposefully oversized, so no matter what time of year the owner is cruising, even if it’s not nice enough to venture outside, there is a connection to the sea. Leather detailing is everywhere, from the custom bedside tables to the handrails. Much of the furniture is bespoke, as are all the beds, which are covered in tactile fabrics and hide TVs built into the foot.

The layout of Storm’s master is influenced by a large bathtub in the en suite, requested by the owner’s wife – and its position, on the main deck, is a first for CdM. The Darwin class has always been about comfort, so traditionally the master would be found amidships on the lower deck, where the least amount of movement is felt.

This move to a more typical superyacht layout is a trend that CdM is making in its explorers, and the Nauta 108 and 111 will sport main deck masters, too. Below, Storm has four cabins: two doubles and the other two for the children, with twins and Pullmans.

As this is a yacht that will be used often and for long spans of time away from shore, storage is everywhere. Not only dry stores for provisioning but sizeable closets in the cabins, and children have plenty of nooks and crannies in their cabins to stow toys.

CdM is a master at making the technical blend in. The recessed ceilings not only look good but also hide the air-conditioning vents, and the shape of the wood detailing helps direct the air to flow evenly throughout the room, while light fixtures are double-glazed to protect the eyes.

Part of having the yacht feel like home is making the crew feel at home, too. The owner specified spacious, cosy quarters, set forward on the lower deck, with a supernumerary cabin as well. “We are very attentive to our crew’s needs and we consider it extremely important to have them living in adequate spaces,” says the owner. “They are on board 12 months a year and when we are on the boat, too, they must have a personal space.”

Other owner demands that translated into well executed solutions include a custom designed bimini top and a transforming platform that folds into the water, designed to launch a PWC or lower to serve as a “beach” that the children can paddle on. Even the pilothouse has been customised to the captain’s exact wishes, which included removing as many controls as possible from the main dash and hiding them in drawers that easily slide out so there isn’t a blaze of lights to distract at night.

“For Storm, whatever they asked for was very pragmatic and functional, very sensible,” explains Buonpensiere. “We all improved ourselves during this build, and that’s a key to success – the ability to accept, learn, improve and think differently.”

The engine room is a showpiece – big, clean and extremely functional. Indeed, this is often the first area on board that CdM shows potential clients. The yard prides itself on over-engineering its yachts, doubling up pumps and creating as much redundancy as possible.

“Our class requires 6mm steel, we put in 12mm – it’s safer, heavier and improves stability,” says Buonpensiere. “We also use copper nickel piping, even when not needed, including the rudders.”

Many CdM yachts are built for families who are attracted to the dependability of its explorers. Of all the CdMs launched, only one has been resold. This speaks volumes: that its owners are really using, and loving, their boats.

There is something about CdM that feels truly grassroots. There is a passion for the marque that is unusual for such a young builder, a growing fan club more expected of classic Feadships or a beloved sailing yacht brand. This is perhaps best seen in the unofficial owners’ rendezvous that occurred last summer.

CdM owners cruising in the Mediterranean held a spontaneous get-together and, of course, they invited Buonpensiere and the yard. Even the new owner of 27m Nauta Air Rosey (ex Yolo), who bought the 2014 yacht last year, has been welcomed into the close-knit CdM family. He received a 24-month warranty and was in touch with Buonpensiere last summer, texting whenever he needed help finding a berth at a marina.

If CdM is a family, Buonpensiere is the patriarch, staying in close contact with all his kin and tracking their progress around the world. “I follow all of our boats on Marine Traffic,” he says.

CdM’s fleet is growing – in number and size. All the latest orders are 30 metres-plus and the order book is full until 2018. The yard is in talks with current owners about stepping up to larger yachts, even if they aren’t ready quite yet, just so they can avoid being stuck in the backlog of new orders. Any yachts being discussed now are slated for delivery in 2020.

One of the things that CdM credits for its success is how it brought its suppliers on board from the start. Many owned a fraction of the company, so they were inspired to deliver the yachts on time and economically, and felt a pride in being part of the shipyard, part of the CdM family.

Storm has only just joined that family but has already logged many miles traipsing around the Med, and there are further-flung adventures to Norway in store. “The more time I can spend on board the better,” says Storm’s owner. “This boat is built to cruise and not live in a marina.”