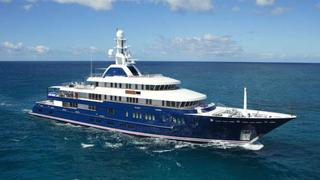 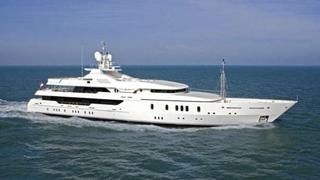 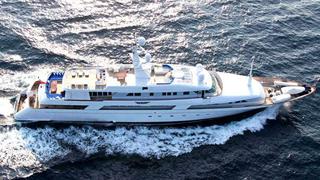 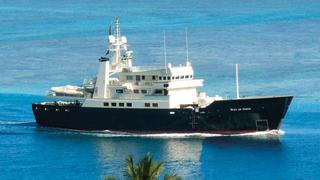 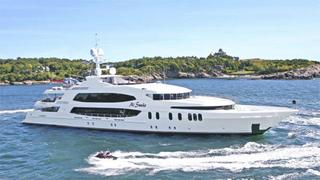 Time is money as the age-old saying goes, and the swiftest way to get to your superyacht is surely by helicopter. Here we present the five largest superyachts for sale equipped with helicopter decks to make for easy entrances  and exits.

Moran Yacht & Ship is offering the 75.5m motor yacht Northern Star for sale. Her design is by Espen Oeino and she was built by German superyacht yard Lurssen with a launch in 2009. British designer Pauline Nunns gave the yachts voluminous interior an English country house style and she comfortably accommodates 12 guests in six staterooms with room for as many as 26 crew. Guest accommodation comprises a master suite, VIP stateroom, two doubles and two twins. All have en suite bathrooms.

Dutch superyacht yard Amels built the helicopter-capable 64.5m motor yacht _Aquarius _to an exterior and interior design by Terence Disdale and delivered her in 2007. The owners large family meant that accommodation space was at a premium and it is now possible to sleep up to 12 guests in six staterooms. These comprise a master suite and five doubles and all have en suite bathrooms.

Lloyds classed and MCA compliant, twin 2230hp Caterpillar engines give Aquarius a range of 5,250 nautical miles and the asking price has been set at 69.9 million at Fraser Yachts.

Elements of strength, power and beauty come together to shape the 63.7m motor yacht Sokar. Designed and built by the Italian superyacht yard Codecasa and delivered in 1990, _Sokar _is one of the most outstanding superyachts of her era. Accommodation is for as many as 18 guests in nine staterooms comprising a master suite and eight double cabins  all with en suite facilities. An impressive cruising speed of 18 knots and a 6,900 mile range make her ideal for worldwide cruising.

She received a major refit in 1997 and 1999 at the Abeking & Rasmussen Shipyard in Germany including extending the yacht by five metres, installing a heli-deck and her paintwork, machinery, emergency and safety equipment are just some of the items that were renewed or improved drastically.

The 58.7m explorer yacht _Bleu de Nimes _was built by Englands Clelands yard as a naval minesweeper with a helicopter deck and completed in 1980. However, she never saw service and was eventually bought by a knowledgeable owner who had her converted into a luxury yacht in 2006. She now has two large decks within her hull giving huge spaces for the owner and guests. Her interior, designed by Pier Vittorio Cerruti, accommodates as many as 21 guests in nine staterooms comprising a master suite, four doubles and four twins plus three Pullman berths.

Twin Cummins engines give her a range of 2,000 nautical miles, and she is asking 25 million at Edmiston & Company

The 57.9m motor yacht_ Mi Sueno_, delivered by US superyacht yard Trinity Yachts in 2010, features a sophisticated, contemporary interior designed by Patrick Knowles. A large saloon has comfortable seating, a 50 inch television screen and formal dining for 14 guests. 14 guests are accommodated in seven superior staterooms. The split-level master suite is located on the main deck and is full beam, with a king size bed, private study, private lounge and his and hers baths.

Two double VIP staterooms below have king size beds while two further doubles have queen size beds and there is a twin cabin with a Pullman berth. All staterooms have 42 inch television screens and en suite facilities.

Mi Sueno also features touch-and-go helicopter capability, a tender garage and a passenger elevator through three decks with wheelchair access. ABS classed and MCA compliant, she was designed for a transatlantic range, but also has a draft suitable for cruising the Bahamas and US East Coast. She has a maximum speed of 20 knots and a range of 4,000 nautical miles at 10 knots.