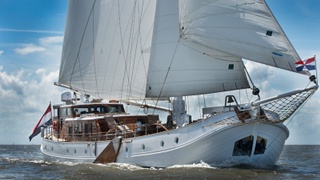 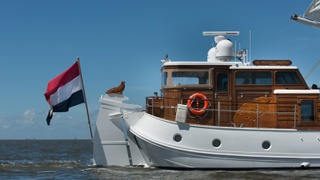 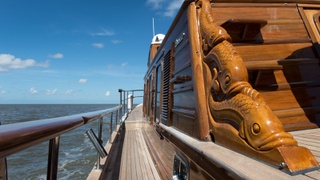 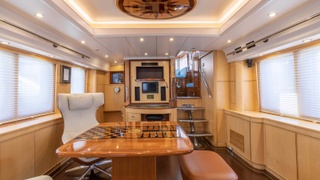 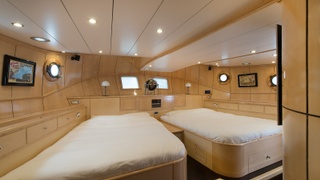 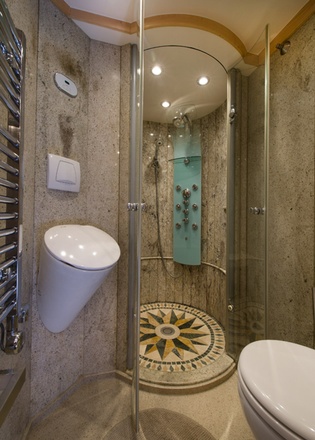 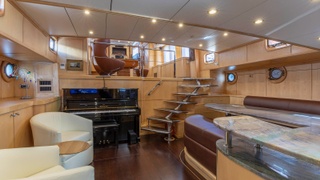 Unbelievably unique: On board the 1957 Feadship De Vrouwe Christina

It's the kind of boat that stops everyone in their tracks and she did so at the Palm Beach International Boat show where she was shown. Two representatives of a well-known superyacht builder stood by the transom wondering aloud if De Vrouwe Christina had ever gone across the Atlantic.

Freshly anointed with some working knowledge of this unusual Feadship's history, I told them that she's been across six times. J.H. (Joe) Krijnen, a member of the family who currently owns the boat has just told me as much. His family has taken care of her since 2002 and undertook two major refits that restored her inherent beauty after years of neglect.

She is (now) a 28 metre gaff-rigged sailing vessel with a very small draft and a surprisingly roomy interior that includes a two-level saloon with polished stainless steel stairs, a Yamaha self-playing piano and an open galley with marble countertops. Ragtime tunes play as I tour the airy interior finished with Birdseye maple and decorated with original artwork. It's a pleasant and playful atmosphere filled with light -- an unexpected contrast with the darker brightwork on the outside. The portholes are all original with a nice patina, but the boat is current, with seven TVs all connected to a security system, and new electronics, installed in 2017.

Broker Andrew LeBuhn of Camper & Nicholson’s who currently is seeking "a person cool enough to own De Vrouwe Christina" received numerous visitors during the show, several who had been on board during her lifetime. One was a member of the New York Yacht Club who remembered her as a support vessel for regattas in the 1970s.

This motorsailor, a member of the Feadship Heritage Fleet, was built in 1957 for Crawford and Christine Failey as a copy of a typical Dutch barge, known in The Netherlands as a paviljoen tjalk or spritsail barge with some notable differences, including a keel.

Failey, heir to a wealthy Indiana family and a professor of medicine, had met Feadship's first representative in the US, Charles Donnelly. Donnelly owned a 16 metre Dutch wooden fishing sailboat (a botter jacht) named De Grote Beer, which was rumoured to have been built for Hermann Goering, although that rumour is most probably false. The boat was very ornate and full of fascinating carvings. Failey loved it and wanted a similar one to take his family cruising, but it was too small. The builder suggested the tjalk design instead because it had good volume and a shallow draft that was well suited to cruise the Intracoastal Waterway and the Caribbean where Failey intended to travel.

Feadship's interior designer employed famed Dutch sculptor Anton Fortuin -- known today especially for his Art Deco style wooden animal sculptures -- to do ornate carvings that decorate the boat inside and out. The hull was built by Akerboom and De Vries completed the superstructure and interior, according to company records.

This yacht plays an interesting role in the story of Feadship in the Americas. The association of boatbuilders that resulted in the company we now know as Feadship, despite some difficulties early on, was successful in attracting buyers in the wealthy US of the 1950s. However, the venture hit a serious snag in 1957.

As told in "The Feadship Story," a book written by Andrew Rogers in 1999, Donnelly may have been good at selling boats but was not the most meticulous bookkeeper. When he filed for bankruptcy, he put the whole venture at risk. To finish this boat and the first Highlander, which had been ordered by then, the boatbuilders reached out to Failey and Malcom Forbes to help financially, which they did, allowing Feadship to continue its American story.

After Failey, the boat had several owners, including James Ryder of the Ryder truck-leasing company, who went on to have a couple more Feadships. It also had several refits, including a repower done in Fort Lauderdale in the 1980s but eventually fell onto harder times. She was used for a time to carry Bahamian lobsters to Florida before ending up in St. Maarten where she became a houseboat. That's where her current Dutch owners, who did extensive research in her background, found her and bought her sight unseen in 2002.

As is traditional is this type of boat, the master cabin is aft, a large and private space with a nice ensuite.

Sitting idle in salt water did not do the boat any favours and they knew they'd have to some major work. They decided to undertake the refit in St. Marteen. How major the work would be, however, was an unpleasant surprise that was only revealed after they "took everything out." "Concrete and seawater don't mix," Krijnen says. The ballast had come in contact with water and made quite a mess. When that was removed, they discovered a lot of the steel hull was gone.

"You could see the roosters from the yard underneath it, so that was not a good start to the first refit," he says. Hence began a labour of love that would go on for three years, but they had good people on their team, including Ginton Naval Architects, and imported raw materials of the best quality.

"We got grade A steel cut from the Netherlands and shipped it to St. Maarten. At the time there was a Canadian welding crew there, and Canadian welders are the best in the world, so they welded two thirds of the hull brand new in 8mm steel instead of the original 4mm, so we had a real rugged ship you can take anywhere," Krijnen says. As luck would have it, he continues, "The company that put in built the ship interior were master cabinet makers as well, that's why the finish is quite good. We built the interior, put two new (Perkins) engines in, it was a brand new ship."

The refit allowed the family to cruise extensively for the next six to seven years. From St. Maarten to the East Caribbean, from Florida on the Intracoastal to New England, from New England back to Florida and on to the West Caribbean, down to South America, across the Panama Canal to Mexico where it was loaded on Dockwise (transport) to Vancouver, then on to Canada, Alaska and back to Vancouver, then Mexico. Eventually it was loaded onto a Seven Stars ship for a trip back to The Netherlands for a second refit, which took place in 2016/2017.

The designer/naval architect for the refit this time was Olivier van Meer who supervised the work that took place at the SFR shipyard in Harlingen, near the Feadship Makkum yard. A big part of the refit was to redo the exterior layout, redesign the forward section of the interior (from the galley to the bow) and enclose the formerly open wheelhouse. De Vrouwe Christina was renovated and refitted "from keel to mast top," according to the architect.

The new enclosed cockpit feels like a loft with abundant light flowing through it, and with a high/low table, it converts to an additional guest cabin. As is traditional is this type of boat, the master cabin is aft, a large and private space with a nice ensuite. There is a VIP with enclosed shower and another guest cabin, with its own stair access, which can be used by crew.

She can sail, and the sails are fully automated, but she often cruised using engine power since she spent a lot of time in shallower waterways. One of the many attractive features is her draft. "It's 1.5 metre draft (roughly four feet), and you can get everywhere. Where people say, 'don't go, it's too shallow,' we go. She goes to all secluded bays," Krijnen says.

And wherever she goes, she leaves no one indifferent. "She is unbelievably unique," LeBuhn says. "One thing that I always appreciated about a classic is that in a world where people build larger and larger yachts, when that classic comes motoring by, every head on that yacht turns and says, 'look how beautiful that is'. And being from the 1950s, she is as classic as they get."